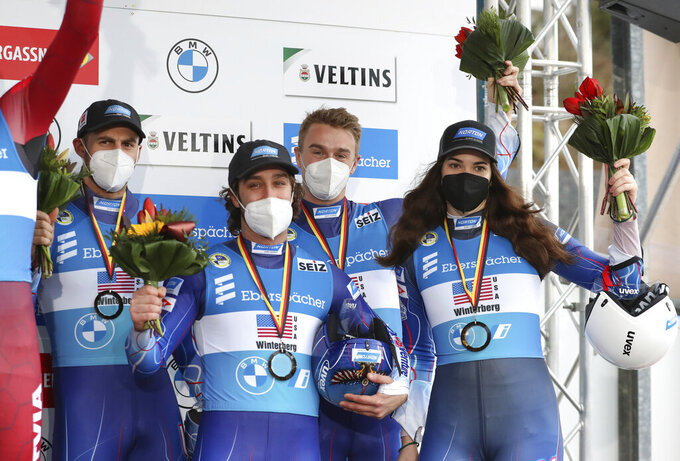 The third placed team from the USA (Summer Britcher, Tucker West, Christopher Mazdzer, Jayson Terdiman) stand on the podium during the award ceremony after the mixed relay competition of the Luge World Cup in Winterberg, Germany, Sunday, Jan. 2, 2022. (Friso Gentsch/dpa via AP)

Chris Mazdzer was wrong. He’s headed to the Olympics.

The 2018 silver medalist, who originally thought a 25th-place finish in a World Cup luge race this past weekend had doomed his chances of making the Beijing Games, was nominated by USA Luge on Monday for what will be his fourth Olympic team.

The decision on whether he was going or not hinged on whether USA Luge was told it had qualified three spots for the men's singles Olympic field. Tucker West and Jonny Gustafson knew they had spots, and Mazdzer spent the weekend waiting and wondering.

“Man, honestly, relief,” Mazdzer told The Associated Press shortly after being informed by USA Luge. “Incredibly excited. It’s a mixed bag this time around. I had no idea it was going to be this emotionally draining and stressful. It’s relief, honor and excitement."

Mazdzer is the only USA Luge men's singles slider to medal in the Olympics, after earning a silver in the Pyeongchang Games four years ago. The only other singles medal for the Americans in Olympic competition came in 2014, when Erin Hamlin won bronze at the Sochi Games.

USA Luge has medaled four times in doubles, taking silver and bronze at both the 1998 Nagano Games and the 2002 Salt Lake City Games.

Mazdzer was hoping to race in both singles and doubles at the Beijing Games. He and doubles teammate Jayson Terdiman were eliminated from Olympic contention last week.

“I'm definitely very excited to be going to the Olympics," Mazdzer said. “I just wish it was with Jayson as well."

The rest of the team that USA Luge was nominating for U.S. Olympic and Paralympic Committee approval, typically just a formality, on Monday was already determined. Summer Britcher, Emily Sweeney and Ashley Farquharson will race in women’s singles, Zack Di Gregorio and Sean Hollander will make their Olympic debuts in doubles, and they’ll be joined by the men’s trio.

“This is my third time going through an Olympic trials process and I was blown away by just the support and character that everyone showed across the board on this team — whether they made the team or not," Britcher said. “It was such incredible sportsmanship. And I’m heartbroken for those of my teammates that didn’t make the team but I’m just really excited to see how that sportsmanship and teamwork builds into the next several years."

Terdiman plans to retire; Mazdzer is leaning toward retirement after this season, though has not made a final decision and could return for a potential farewell if there is at least one race in North America in the coming seasons.

“It would be nice to do at least one race back in North America," Mazdzer said.