Day 2 at the Olympics: Shiffrin, skating and snowboarding 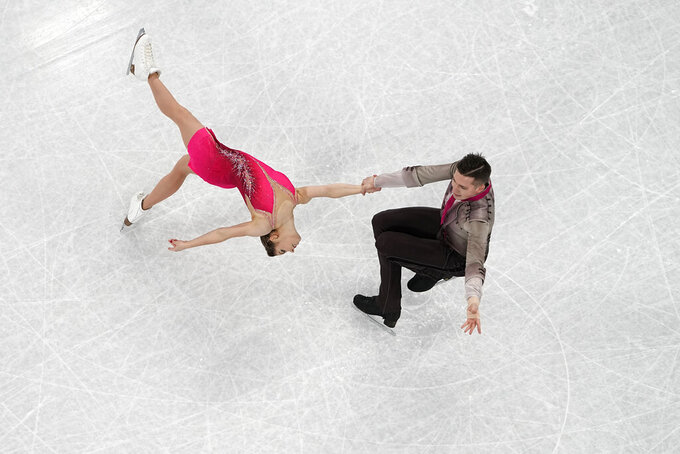 BEIJING (AP) — Mikaela Shiffrin's first event of the Beijing Olympics is the one she won four years ago.

The American star is set to defend her title in the giant slalom, which will be part of prime-time coverage of the Winter Games on Sunday on NBC — although anyone who wants to watch to the end should plan on being up late. The second of the two giant slalom runs is scheduled to start after midnight Eastern time.

The team figure skating competition also wraps up Sunday night, and the men's slopestyle snowboarding final could be another highlight in the U.S. after Red Gerard won that event in 2018.

The giant slalom is the first showdown between Shiffrin and Slovakia's Petra Vlhova, whose rivalry is expected to stretch across several skiing events at these Olympics. Vlhova finished 13th at Pyeongchang in 2018 in this event, but she won the world title a year later.

Shiffrin's two medals in 2018 were her gold in giant slalom and a silver in combined, and she also won the slalom in 2014.

The first giant slalom run is scheduled for 9:15 p.m. and will be carried live on NBC. The second run will air live on the network's late-night coverage. USA Network will also have live coverage of the first run.

The team event is also part of NBC's live coverage in prime time. That competition finishes up with the pairs' free skate, free dance and women's free skate.

The five countries that advance to that stage are allowed to make a maximum of two substitutions to their lineups. American ice dancers Madison Hubbell and Zachary Donohue turned in the top performance of the rhythm dance, when they skated to a Janet Jackson medley.

The U.S. has won both men's slopestyle snowboarding events at the Olympics — Gerard in 2018 and Sage Kotsenburg in 2014. Five of the six medals in those years went to North Americans.

NBC plans to show the slopestyle final during its late-night coverage.

Competitors will jump at Big Air Shougang, a repurposed steel and iron mill that now holds the world’s only permanent Big Air facility — and does so within Beijing’s city limits. Temporary structures have been built for events at Boston’s Fenway Park and Atlanta’s Truist Park in recent years as the mountain sport tries to expand its reach into metropolitan areas.

U.S. freeskier Colby Stevenson has criticized those scaffold-supported temporary jumps as “pretty sketchy." Reviews for the Shougang jump — located next to a trio of abandoned cooling towers — have been positive.

“They pretty much just spliced a mountain jump and put it in a city,” teammate Alex Hall said. “It’s pretty perfect looking.”

German luge star Felix Loch is a two-time Olympic champion in singles, but his bid for a third straight title collapsed in shocking fashion when he bumped a wall on the final run in 2018. He's back, although he faces strong competition from countryman Johannes Ludwig, among others.

The U.S. women's hockey team faces Switzerland live at 8:10 a.m. on USA Network, with an encore presentation at 5 p.m. ... Norway’s Johannes Hoesflot Klaebo returns after winning three gold medals in cross-country skiing in Pyeongchang. He did not medal in the skiathlon that year, though, and that's the event slated for Sunday. USA Network is showing it live early in the morning and again during prime time. NBC is slated to broadcast it during the afternoon. ... Swedish speedskater Nils van der Poel, the world record-holder in the 5,000 meters, races live in that event early in the morning on USA Network, with an encore presentation in the afternoon on NBC.