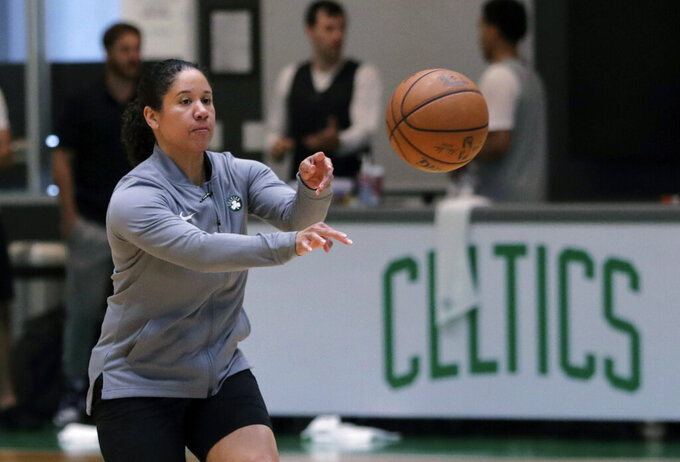 FILE - In this July 1, 2019, file photo, Boston Celtics assistant coach Kara Lawson passes the ball at the team's training facility in Boston. A person familiar with the situation says Duke is in talks with Boston Celtics assistant coach and former WNBA All-Star Lawson to lead the Blue Devils women’s basketball program. The person spoke to The Associated Press on condition of anonymity Friday, July 10, 2020, because the school has not commented publicly on its search. (AP Photo/Charles Krupa, File)

The school announced the hiring in a social media post Saturday, a little more than a week after Joanne P. McCallie announced she wouldn’t return for a 14th season as she entered the final year of her contract. It is the first college head-coaching job for the 39-year-old Lawson, who played under Pat Summitt at Tennessee before a long WNBA career as well as work in broadcasting.

In a statement, Lawson called it “a dream come true" for someone who “wanted to be a coach since I was a kid.”

“Everybody I spoke with and had a chance to interact with, I immediately felt a great connection,” Lawson said. "It wasn’t a decision based on emotion, but there was a lot of emotion involved in it because of how excited I am and how ready I am to get started and to work with the players.”

Lawson appeared in three Final Fours at Tennessee and then played in the WNBA from 2003-15, winning the 2005 championship with Sacramento. She also was part of the U.S. Olympic team that won a gold medal in Beijing in 2008. She had also worked as a TV commentator for NBA and college basketball games before the Celtics hired her in June 2019.

Additionally, she has assisted USA Basketball efforts to prepare 3-on-3 teams for the Tokyo Olympics.

In statements, athletics director Kevin White called Lawson “the ideal fit” while university president Vincent Price said Lawson “has proven herself as a skilled coach and a committed mentor.”

Duke is the second Atlantic Coast Conference program this offseason to hire a woman working as an NBA assistant to be its head coach. Notre Dame hired Memphis Grizzlies assistant Niele Ivey – a former Fighting Irish player and assistant – to replace Hall of Famer Muffet McGraw in April.

Lawson inherits a Duke program that regularly goes to the NCAA Tournament, yet hasn’t won a league title since the ACC added national powers Notre Dame (2013) and Louisville (2014) to what was already a top-flight conference.

McCallie led Duke to at least a share of the regular-season title four times and three ACC Tournament titles while also making 10 trips to the NCAA Tournament, including four straight trips to the Elite Eight from 2010-13.

But the Blue Devils have failed to finish in the top three of the league regular-season race in four of the past seven years since the last wave of league expansion.

It’ll be up to Lawson to shake things up and give the Duke program a jolt.