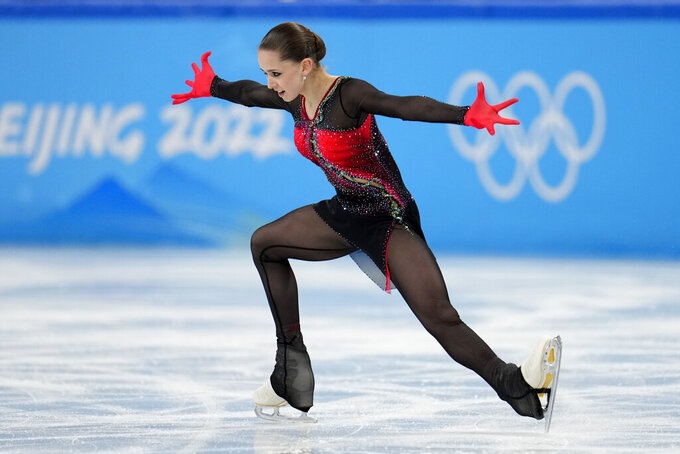 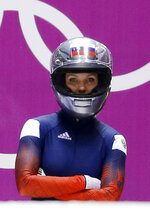 BEIJING (AP) — Kamila Valieva was back on the Olympic ice at the Beijing Games for the individual competition Tuesday, skating into the lead hours after details of her legal defense in a doping case were revealed.

Lawyers for the 15-year-old Russian figure skater argued contamination from the heart medication trimetazidine her grandfather was taking caused the positive test in a sample taken weeks before the Olympics opened.

The argument was made at the Court of Arbitration for Sport hearing late Sunday night, according to IOC member Denis Oswald, a veteran sports lawyer and judge in previous Russian doping cases.

Oswald confirmed lawyers for Valieva “presented elements that brought some doubts about her guilt” — a factor which helped persuade the three CAS judges to let her continue to compete at the Olympics.

Valieva is favored to add the Olympic title Thursday to the team gold she won with the Russians last week. Neither medal will be presented in Beijing by the IOC because the Olympic body is waiting for the longer-term investigation of her doping case to play out.

Here's a look at what we know about Valieva's legal issues.

WHAT IS THE DRUG?

Trimetazidine is a metabolic agent that can help prevent angina attacks if used as an “add-on treatment,” according to the European Medicines Agency.

It can increase blood flow efficiency and improve endurance — both crucial to any high-end athletic performance.

The European agency recommended in 2012 that doctors no longer prescribe trimetazidine for “tinnitus, vertigo and visual-field disturbances.”

It is on the prohibited list managed by the World Anti-Doping Agency in the category of “hormone and metabolic modulators.”

The drug shows a small improvement in exercise tolerance for older patients who already have severe heart disease, doctors in Russia told The Associated Press.

“The medicine wasn’t, of course, tested on athletes, and it wasn’t designed for athletes,” said Dr. Anton Rodionov, a prominent cardiologist in Moscow.

Alexei Erlikh, head of cardiac ICU at Moscow Hospital No. 29, said trimetazidine was once heavily promoted in the country by a manufacturer so “its use in Russia is catastrophically huge.”

The effect of the drug on healthy people — like a 15-year-old elite athlete — is likely to be “smaller than small,” Rodionov said.

“But on the other hand, we understand that high-achieving athletes are fighting for every millisecond, for every 0.0001%, believing, as some say, that every speck of dust is a vitamin pill,” Rodionov said.

The three-time Olympic champion served a three-month ban in 2014 in a ruling that was published by China’s anti-doping agency only when it was over.

That was Sun’s first doping offense. He was punished more severely for his second, and more high-profile, offense of refusing to cooperate with a sample collection team at his home in China.

Russian bobsledder Nadezhda Sergeeva tested positive for trimetazidine at the 2018 Pyeongchang Olympics. She was disqualified from the two-woman bob event and served an eight-month ban. Sergeeva is back at the Beijing Olympics and placed 10th in monobob on Monday.

WHEN DID VALIEVA TEST POSITIVE?

Valieva won the women’s individual event at the Russian national championships on Dec. 25 in St. Petersburg.

The urine sample taken that day by the Russian anti-doping agency, known as RUSADA, was sent to a WADA-authorized laboratory in Sweden. Russia does not have its own accredited lab. The discredited Moscow operation was shut down after Russia's state-backed doping scandal broke in 2015.

When Valieva's sample was sent and when it arrived in Stockholm has not yet been stated publicly.

The turmoil at the Olympics came because the Stockholm lab didn't flag up the positive test until Feb. 7, hours after Valieva's standout skate in team event helped the Russians take gold.

In defense of its lab, WADA has said Russian officials failed to label the batch of samples as a high priority for analysis so close to the Winter Games. Only priority tests were being handled while the lab was short-staffed during a January wave of COVID-19 cases.

WHO IS HANDLING THE CASE?

The legal process in Beijing became one of the biggest stories of the Olympics.

RUSADA is responsible for the pre-Olympic sample and was obliged to impose a provisional ban on Valieva. That was done last Tuesday, and lifted one day later when an appeal on Valieva's behalf was upheld by a RUSADA disciplinary panel.

That triggered appeals by the IOC, WADA and the International Skating Union to the Court of Arbitration for Sport's special Olympic operation in Beijing. They asked for a new interim ban, which would effectively end the Olympics for Valieva.

After a nearly six-hour hearing through Sunday night, the victory for Valieva was announced Monday afternoon.

A full doping investigation of the doping case will be prosecuted by RUSADA and include Valieva's entourage. WADA is watching closely and can appeal against any Russian verdict.

The likely path is another hearing at CAS in Lausanne, Switzerland, with a different panel of three judges. That would take at least several months to stage.

Only when the process is over at CAS will there be clarity for the result of Valieva's events in Beijing and who gets the medals. A further appeal on narrow procedural grounds is also possible at Switzerland's supreme court, also in Lausanne.

AGE IS A FACTOR

Valieva’s age can give her exemptions and leniency as a “protected person” in the World Anti-Doping Code.

An investigation of “athlete support personnel” is mandatory when a protected athlete is implicated in a doping case.

If doping is proven, a 15-year-old athlete like Valieva faces a maximum two-year ban instead of four. The minimum sanction is no ban and a reprimand "depending on the protected ... athlete’s degree of fault.”