EXPLAINER: How does curling scoring work? 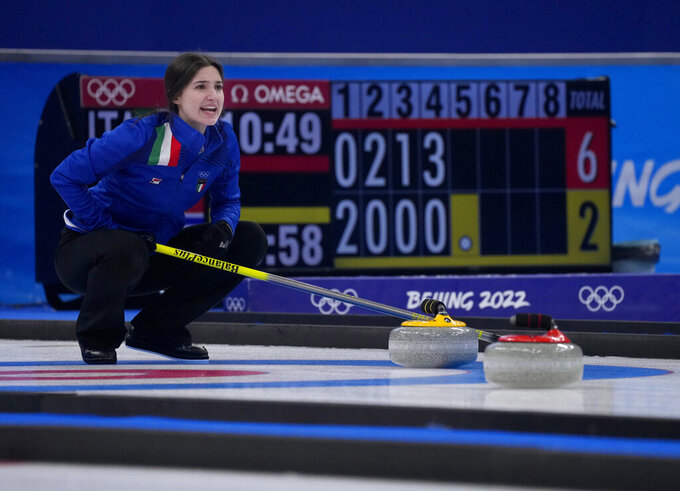 BEIJING (AP) — Amid the clattering of the rocks and the shouting and sweeping and chess-like strategy, curling has a simple goal: position as many stones as possible closest to the center of the target.

All that is left then is to tally up the points. And while curling technique and strategy can be complicated, the scoring isn’t.

Here is an explanation of how the game is scored:

The target area is called the house, and at its center is the button. The rock closest to the button is the shot rock, and the team that played the shot rock will score at least one point in that end. (Think of an end like a baseball inning.)

The Olympics is using stones with yellow and red handles. So if the closest rock is red and the next-closest one is yellow, the red team will score one point. (Only one team scores in each end.)

COUNTING IT ALL UP

If the two stones closest to the button belong to the same team, that team gets two points. Three is three points, and so on until an opposing rock is closer, or until there are no other stones in the house.

Usually, the players themselves will eyeball the stones and agree which are scoring rocks. If it is too close to call, the referee comes in with a contraption that extends from the button to measure which is closer.

The team that throws last in an end has a big advantage, which is called the hammer. In many ends, the hammer is used to take out an opposing rock, or rocks, or simply aimed at the button, called a draw.

The last rock is such an advantage that a score of one point with the hammer can be considered a disappointment, because the scoring team must give up the hammer for the next end.

If the team without the hammer scores, it is known as a steal.

If there are no stones in the house when all eight have been played -- called a blank end -- the hammer stays put.

That doesn't necessarily mean someone messed up: Because the hammer is considered more valuable than a single point, teams will sometimes intentionally blank an end to retain the last-rock advantage in the next one -- especially approaching the final ends in a close match.

In traditional team curling, each team throws eight stones per end -- four players, throwing two stones apiece. Although the maximum score would be eight, there has never been an eight-ender in the Olympics. (Among other things, teams typically deploy some of their stones as guards, to block their scoring rocks from an opponent’s takeout. So it is rare that a team even tries to put all eight stones in the house.)

Britain’s Eve Muirhead scored a seven-ender against the United States in the 2014 Olympics round-robin. In the Pyeongchang championship, John Shuster’s American team scored a five-ender that helped clinch the gold medal against Sweden.

Mixed doubles curling has a maximum score of six.