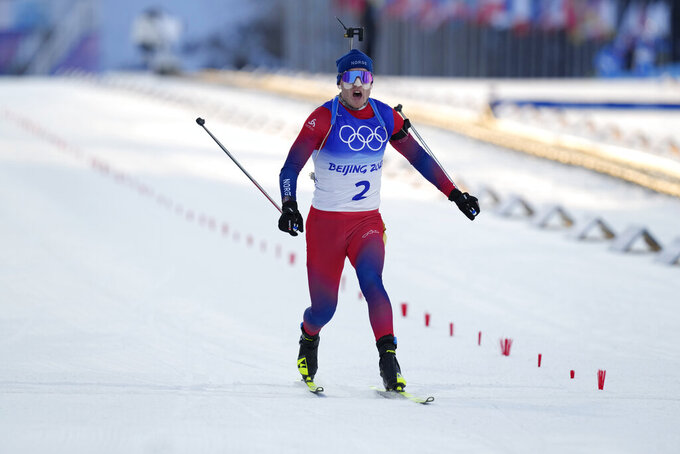 The Frenchman won the the 20-kilometer individual biathlon race on Tuesday, adding a gold medal to the silver he won in the mixed relay over the weekend.

Fourcade, a five-time Olympic champion from France, retired from the sport in 2020. Norwegian biathlete Johannes Tingnes Boe took over as the top competitor on the World Cup circuit after Fourcade, but Fillon Maillet has been the one to beat this season.

“Maybe it looked easy but it was so hard today,” Fillon Maillet said. “With two misses in the shooting I never expected the victory. Maybe the podium. It was amazing.”

Fillon Maillet has 10 World Cup podium finishes this season, half of them on the top step, to lead the World Cup standings.

On Tuesday, he missed two of 20 targets and finished the race in 48 minutes, 47.4 seconds.

Anton Smolski of Belarus shot clean — hitting all 20 targets — and came in 14.8 seconds behind the Frenchman.

Boe, the defending individual Olympic champion, also missed two targets and earned the bronze medal, 31.1 seconds behind Fillon Maillet. He had outsprinted the Frenchman in the mixed relay Saturday to secure gold.

Boe and Russian biathlete Maxim Tsvetkov raced most of the course together, heading out with bib Nos. 1 and 2, but Tsvetkov missed his last shot and finished 34.9 seconds behind Fillon Maillet in fourth.

“I did quite a good job with bib No. 2," Boe said. “I was early on the course, fighting, and on the range. I was well prepared mentally, and I had a good feeling during the race.”

Competitors raced 20 kilometers in five ski loops, shooting twice in the prone position and twice standing between each lap. In all other biathlon events, they ski a 150-meter loop for each missed shot, which takes about 20 seconds. But in the individual race, one minute is added for each miss, making shooting accuracy especially important.

Boe led the World Cup standings three years in a row. He was unrivaled on skis and became tough to catch after he improved his shooting accuracy. But his results faltered this season. He went 17 races without an individual win until finally a victory in a sprint race in France in December.

He sprinted away from Fillon Maillet and Russian rival Alexander Loginov to take the gold in Saturday’s mixed relay — the first biathlon event of the Beijing Olympics. Although he couldn't catch the Frenchman in Tuesday's race, he still has a gold and a bronze.