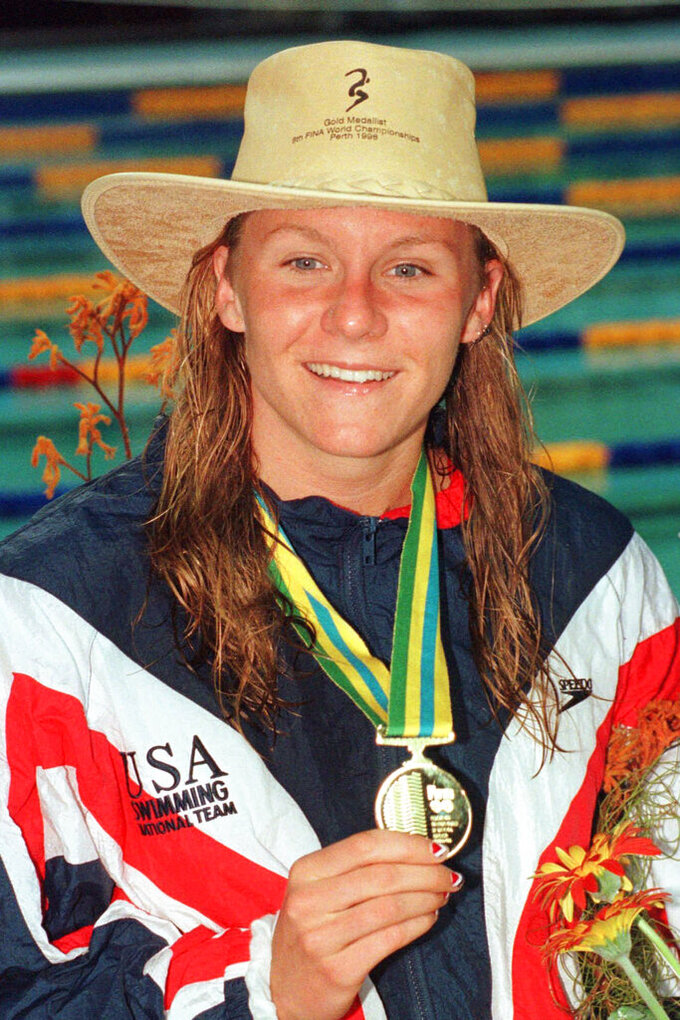 FILE - In this Jan. 15, 1998, file photo, Jenny Thompson shows off the gold medal she won in the womens 100 meter butterfly final at the World Swimming Championships in Perth, Australia. One of America's greatest Olympic swimmers, Thompson is now on the front line of the fight against coronavirus as an anesthesiologist at the VA hospital in Charleston, South Carolina. (AP Photo/Rick Stevens) 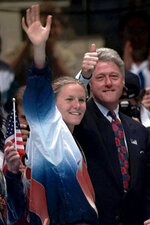 Only now, she performs in an operating room rather than the pool.

One of America’s greatest Olympic swimmers, Thompson is on the front line of the fight against coronavirus as an anesthesiologist at the VA Medical Center in Charleston, South Carolina.

“I like things that happen fast,” she said in a telephone interview with The Associated Press. “In the operating room, things happen fast.”

Thompson competed in four Olympics, winning eight golds and 12 medals overall before she retired after the 2004 Athens Games. Then she turned to her other passion.

The Massachusetts native chose anesthesiogy because it fit the persona of a swimmer who specialized in shorter races.

“I loved the acute nature of helping patients during surgery,” Thompson said. “As a sprinter, I really appreciated the fast changes you see in physiology. You’re giving drugs and seeing immediate results.”

After working in a private practice in Maine for seven years, she moved to Charleston in 2018 along with her husband and their two young sons, now 4 and 7.

The coronavirus outbreak added a whole new element to her job.

“When I saw it coming our way, I had a lot of fear about being protected,” the 47-year-old Thompson conceded. “Once we had adequate PPE (personal protective equipment), I felt like I was ready.”

The virus has yet to have a major impact in South Carolina, which has recorded about 6,500 cases and less than 300 deaths. The VA hospital in Charleston has dealt with only one serious case of Covid-19, according to Thompson, and a handful of other patients who were stricken milder symptoms.

But aging veterans are an especially vulnerable group. Thompson knows the numbers could get worse, especially with South Carolina joining a growing list of states that are taking steps to reopen even as the death toll in the United States climbs toward 70,000.

“The end is not anywhere in sight. I know we will see more patients,” Thompson said. “We’re prepared and we’re ready.”

She has mixed feelings about lifting restrictions that have helped curb the spread of the highly infectious virus, but have sent the economy into a record-setting plunge.

“I’m worried there’s going to be another surge of cases,” Thompson said. “I also think it’s a delicate balance of what people can handle, and what the economy can handle. Unemployment is the worst it’s been in history, but people need to be accountable for their actions.”

This past weekend, there were scenes around the country of people gathering in large numbers, many of them not wearing masks or staying the recommended 6 feet apart. Some headed to the beach. Others congregated in city parks. There were even reports of people lining up at an Atlanta mall to purchase a newly released Air Jordan sneaker from Nike.

That is troubling to health-care workers such as Thompson.

Thompson looks back fondly on her athletic career. She was one of America’s greatest relay swimmers, capturing 10 of her 12 Olympic medals while teaming with others. She is tied with fellow swimmers Dara Torres and Natalie Coughlin for the most overall medals by an American woman. Only Michael Phelps has won more.

“For a long time, I was so immersed in my medical training and starting a new career and having a new family, I didn’t think about it too much,” Thompson said. “But as time goes on, and people are still talking about what I did, it’s becoming more clear that it was a really special career. I’m just so grateful for all the people around me who helped me.”

Swimming, it turned out, merely prepared her for a higher calling.

Thomson still has the fierce competitiveness that served her so well in the pool. Only now, she's taking on a far more daunting opponent.

“Through my swimming career, I learned mental toughness and how to deal with adverse situations,” she said. “I've tried to extend the mental toughness to those around me. This is the ultimate challenge that any of us has ever faced.

“But I've always thrived on challenges.”