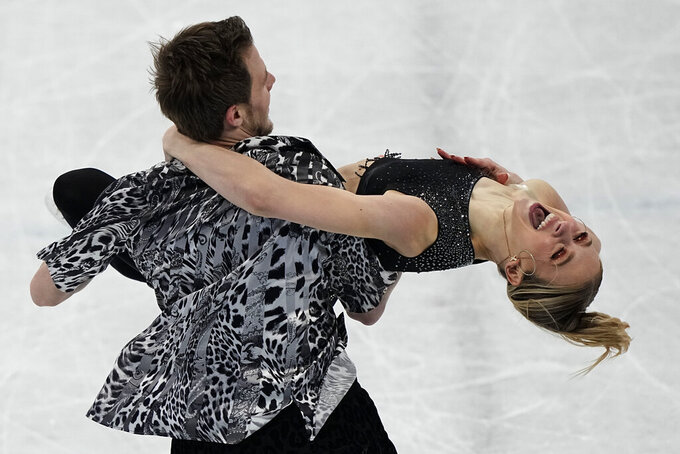 Victoria Sinitsina and Nikita Katsalapov, of the Russian Olympic Committee, perform their routine in the ice dance competition during figure skating at the 2022 Winter Olympics, Saturday, Feb. 12, 2022, in Beijing. (AP Photo/David J. Phillip)

BEIJING (AP) — Many thought Gabriella Papadakis and Guillaume Cizeron deserved to stand atop the podium four years ago in Pyeongchang, when they were edged by their longtime rivals Tessa Virtue and Scott Moir in one of the tightest Olympic ice dance competition in history.

The four-time world champions from France aren't planning to leave anything in doubt in Beijing.

Once more merging their unique combination of technical skill and balletic grace, Papadakis and Cizeron broke their own world record in the rhythm dance Saturday night. Their score of 90.83 points gives them a welcome buffer over their closest rivals, Victoria Sinitsina and Nikita Katsalapov, heading into the free dance.

“It couldn’t be more different because we were pretty disappointed four years ago and we’re very happy now,” Papadakis said.

Sinitsina and Katsalapov, the reigning world champions from Russia, scored 88.84 points to stay within striking distance of gold.

Then came the U.S. contingent: Madison Hubbell and Zachary Donohue, who just missed the medals four years ago, scored 87.13 points to their “Rhythm Nation” program while Madison Chock and Evan Bates scored 84.14 points as they attempt to finally crack the podium in their third Olympics together.

The free dance to decide the medals is scheduled for Monday.

The two American teams are already assured of at least one medal from Beijing after helping take silver in the team event last week. That could eventually be upgraded to gold depending on the outcome of a Russian doping inquiry.

Alexandra Stepanova and Ivan Bukin, who were late arriving to Beijing and did not take part in the team event, were the first to post a real target for everyone else Saturday night. The Russians scored 84.09, just off their season best set at the European championships, to their pop mashup of The Backstreet Boys, Shawn Mendes and Justin Bieber.

The lead lasted through Britain's Lilah Fear and Lewis Gibson and until Papadakis and Cizeron took the ice.

The four-time world champions showed why they have been nearly unbeatable during the past four years, losing only once, at the 2020 European championships. With sharp edges and crisp turns, Papadakis and Cizeron seemed to float across the ice of the historic Capital Indoor Stadium, finally breaking through what had been some stingy scoring.

The two graceful technicians received Level 3 marks for their midline step and pattern dance and Level 4s — the highest mark possible — for everything else, giving them a record score and sending them into first place.

“I think we've been waiting for four years now, but then the last, you know, a couple days, couple of hours, couple of minutes, you know, then it was flight time," Cizeron said. "And once we were in the air, you know, everything disappeared and there was just, you know, momentum.”

That one team that beat Papadakis and Cizeron a couple years back? Sinitsina and Katsalapov.

With an edgy program highlighted by “Brickhouse” by the 1970s and ‘80s American funk and soul band The Commodores, the reigning world champions rocked their way through a strong program. They also earned Level 3s for their midline step and pattern dance and received a score of 88.85 to keep in contention.

“We were really thinking of every edge we did in both footworks,” Katsalapov said. "And sometimes when you see the reviews, you think it’s clean, and sometimes on their reviews, it can be not clean at all. So I think judges were fair because we tried our best.”

Chock and Bates, who is appearing in his fourth Olympics after teaming up with Emily Samuelson in 2010, had some shaky moments during their rhythm dance. Chock fought to hang onto a significant bobble during the midnight blues sequence, and their Level 2 marks for their midline step left them playing catchup for a medal.

Piper Gilles and Paul Poirier, the world bronze medalists from Canada, also struggled through their midline step sequence to a medley of music by Elton John. That left them behind Stepanova and Bukin in sixth place.

“Our score was a bit lower than we hoped,” Chock said. “We need to look at the protocol and see where we lost some levels. That's probably where it was. But yeah, it's not over yet.”