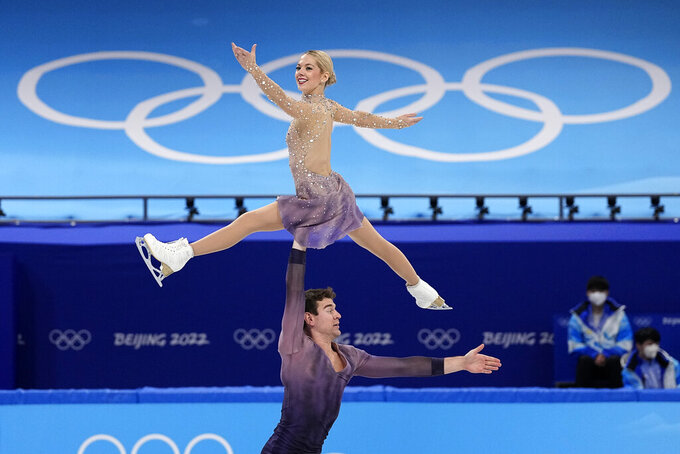 Alexa Knierim and Brandon Frazier, of the United States, compete in the pairs free skate program during the figure skating competition at the 2022 Winter Olympics, Saturday, Feb. 19, 2022, in Beijing. (AP Photo/David J. Phillip)

BEIJING (AP) — American pairs skaters Brandon Frazier and Alexa Knierim said they were left alone to concentrate on their free skate Saturday night while teammates appealed to stage a medal ceremony for their team silver left in limbo amid a Russian doping scandal.

U.S. figure skaters lost their appeal to the Court of Arbitration for Sport early Sunday, failing to overturn a decision by the International Olympic Committee to withhold their silver medals from the team competition as a skater from the gold medal-winning Russian group was investigated.

“Our teammates have done a great job of letting us just focus on our individual competition, so no one brought (it) to our attention for that purpose,” Frazier said after the duo finished sixth in pairs with a strong performance.

Frazier and Knierim said they were not directly involved in the team’s lawsuit demanding a medal ceremony before the Winter Olympics close Sunday.

A team spokesperson said it was other athletes who reached out to the United States Olympic and Paralympic Committee’s ombudsman, who then worked on their behalf to file the suit.

“They should have a ceremony for the clean athletes that delivered. They deserve that,” Knierim said prior to the decision.

Other athletes also said they supported the American team’s last-ditch effort to get their hands on their medals.

“I definitely think it would be a shame if that was taken away from them because they earned it,” said Michael Marinaro, a Canadian pairs skater. “Definitely feeling upset for them, and I hope that they get to stand on that podium.”

At issue was whether the doping investigation declares that Russia’s Kamila Valieva is disqualified for a positive drug test from before the Olympics. The 15-year-old skater helped the Russian team win a gold in the medley team competition during the first week of the Games.

IOC president Thomas Bach has since offered U.S. figure skaters Olympic torches as holdover gifts while they await a resolution. The Japanese team were also contacted for a stand-in memento.

Canadian pairs skaters Vanessa James and Eric Radford — who placed 12th at Saturday’s pairs event — are among those who may or may not ultimately get the bronze for their performance in the team event.

“I think every athlete deserves to have a medal ceremony,” James said. “It’s an Olympic experience.”