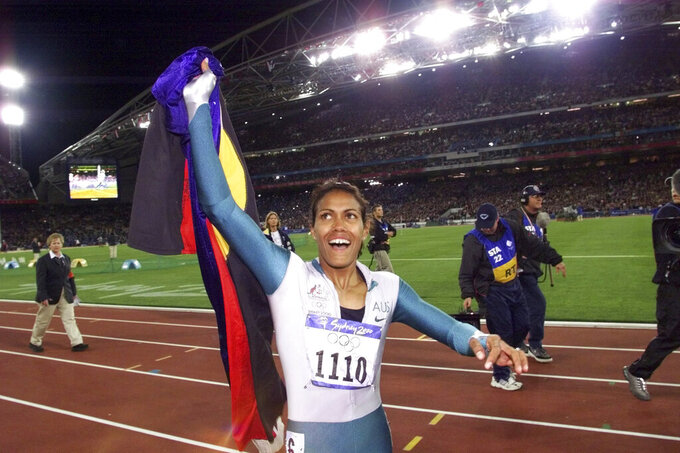 FILE - In this Sept. 25, 2000, file photo, Australia's Cathy Freeman celebrates winning the women's 400 meter race at the Summer Olympics at Olympic Stadium in Sydney. Freeman ignited the Olympic flame to open the Sydney 2000 Games and returned 10 nights later to win a gold medal in the 400 meters that had been a long time in waiting for country. She was the first Aboriginal person from Australia to win an individual Olympic gold. And she celebrated in a bare-foot victory lap with an Australian flag and the red, black and yellow Australian Aboriginal flag together in her hand. (AP Photo/Thomas Kienzle, File)

In a momentary pause between reality sinking in and her victory celebrations fully starting, Cathy Freeman looked toward a track official and twirled her index finger to signal a full circuit.

It wasn’t a question of if, but for how long.

Within seconds, she had an Australian flag and the Australian Aboriginal flag — black on red in the background, yellow sphere in the center —together in her hand as she started a barefoot, triumphant lap of Sydney’s Olympic Stadium.

Six years after an aging team official threatened to send her home from the Commonwealth Games in Canada for running a victory lap with both flags, this was a poignant riposte.

This was Freeman’s moment, which nobody could deny.

She’d ignited the Olympic flame to open the Sydney 2000 Games and she’d returned 10 nights later to win a gold medal in the 400 meters that had been a long time in the waiting for her country.

Freeman was the first Aboriginal person from Australia to win an individual Olympic gold medal. Carrying the Aboriginal flag was her dedication to First Nations people in Australia. And to the Australian nation.

“I have tried really hard each day, each year I get older to really respect the way that people relate to that one race in September in 2000. It is so intense and it is so honest," Freeman said in a reflection for the International Olympic Committee. “The whole story has become larger than who I am.”

The crowd of 112,524, a euphoric mass of humanity, chanted her name. Freeman was given the flags by spectators. She draped them over her shoulders before she found her mother and her brother in the stands and blew kisses to them.

John Coates, one of the key organizers of the Sydney Games and now an International Olympic Committee vice president, simultaneously saluted and breathed a sigh of relief. It was at his invitation that Freeman had agreed to light the cauldron, ramping up the pressure on her athletic performance.

In the seating reserved for athletes, Australian hurdler Kyle Vander-Kuyp was so proud of his friend and long-time teammate that it almost exorcised his own disappointment at narrowly missing out earlier in the night on qualifying for another Olympic final.

He said Freeman, a former housemate and a fellow Indigenous athlete, was instrumental in “setting the scene for Sydney.”

“You run as an Australian, but if you’ve got a chance to express how proud of your heritage you are, and your identity ... I think that’s what she was doing, saying ‘I’m Aboriginal. I’m Australian, but I’m also Aboriginal and I’m proud of it,'" he said.

In the coaching area, Peter Fortune savored a once-in-a-lifetime victory. Her triumph was a first for Indigenous Australians and gave Australia its 100th Olympic gold medal.

Since retiring as an athlete, Freeman has established a successful foundation dedicated to the education of Aboriginal and Torres Strait Islander children.

She is working on another project now, and wasn't available to comment.

Others closely connected to that night — Coates, Vander-Kuyp and Fortune — were unanimous in interviews with The Associated Press that Freeman’s signature moments defined the Sydney Olympics.

“Certainly for me it did,” Coates said.

Fortune, despite being Freeman's coach, wasn’t foretold of her role in the opening ceremony but also didn't get any sense she was under extra pressure.

“There was a lot of hype, a lot of things going on. Given everything, it rates at the top ... of Australian Olympic moments," he said.

He’d sought permission in advance from the IOC to have the Aboriginal flag flying as well as the Australian flag at Olympic venues, as it does now on public buildings.

“It wasn’t a protest,” Coates said. “It had a lot to do with reconciliation.”

Aboriginal and Torres Strait Islands people comprise 2% of Australia’s adult population but 27% of the prison population. Since British settlement in 1788, Indigenous people in Australia have become the most disadvantaged ethnic minority and have higher-than-average rates of infant mortality and poorer overall health, as well as shorter life expectancy and lower levels of education and employment than other Australians.

After some landmark moments in the reconciliation process in the 1990s in Australia, more than 200,000 people joined a reconciliation march across Sydney Harbour Bridge in May 2000, less than four months before the Olympic opener.

Coates had asked Freeman over a dinner that same month if she’d be willing to light the cauldron, telling her “I think this would be important in history. You can play an important role.”

Freeman, then a two-time world champion and Olympic silver medalist, suggested other candidates to light the flame but ultimately accepted.

Coates recalled telling her: “Your primary purpose at this Olympics Games is winning the 400 — You’ve got to be satisfied that this isn’t going to upset your chances there.” She replied, he recounted. ”John, I love pressure. That’s when I perform at my best.”

Aboriginal athletes had overcome discrimination and racism to become stars in rugby league, Aussie rules and boxing, and Evonne Goolagong Cawley is one of the international tennis greats after winning seven Grand Slam singles titles from 1971-80. The Olympics and the timing, though, gave Freeman a truly global forum.

“I think it had a lot to do with changing people’s attitudes,” Coates said. “You couldn’t have got a more high-profile platform.”

It took another seven years before an Australian prime minister made a formal apology to Aboriginal people for injustices and past government policies. Progress on the “closing the gap” process between Indigenous and non-Indigenous Australians has been slow.

Vander-Kuyp, a finalist in the 1995 world championships and 1996 Olympics and now a member of the Australian Olympic Committee's Indigenous advisory group, said the “conversations have gone a bit quiet" but Australians generally are gradually improving their knowledge and awareness of Aboriginal culture.

Freeman helped break down some barriers, he said.

“You hear of the current day Olympians who mention Cathy’s run, they say, ‘When I was a kid I watched the Sydney Olympics and I watched Cathy,’” Vander-Kuyp said. “If they were at the dinner table and they asked ‘What’s that flag? What’s Cathy got there?' They're the conversations that Cathy would have started."

NBA star Patty Mills, who was 12 in September 2000, is among those who were deeply inspired.

The San Antonio Spurs guard is raising awareness of causes in his home country of Australia devoted to reducing Aboriginal deaths in custody and tackling racism. He's has also recently created his Indigenous Basketball Australia to empower Aboriginal and Torres Strait Islander youths.