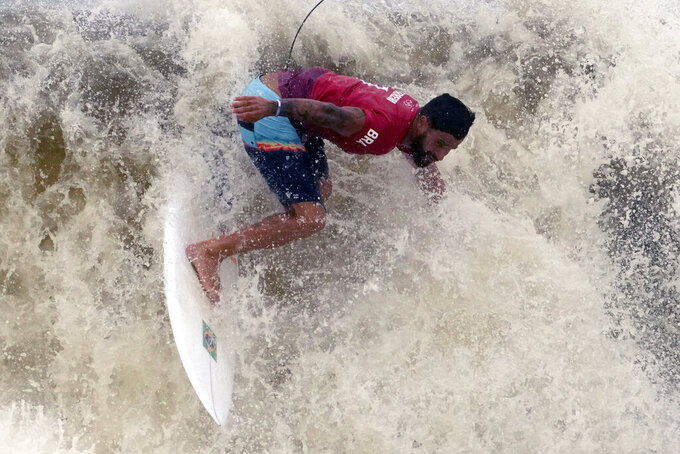 Brazil's Italo Ferreira maneuvers on a wave during the quarterfinals of the men's surfing competition at the 2020 Summer Olympics, Tuesday, July 27, 2021, at Tsurigasaki beach in Ichinomiya, Japan. (AP Photo/Francisco Seco)

TOKYO (AP) — On the beach about 60 miles east of Tokyo, Olympic surfers are enjoying waves created by an approaching typhoon that has disrupted some outdoor events — and made the proceedings feel even more dramatic, both in life and on camera.

The storm is a major win for competitive surfing, given that Tsurigasaki Beach is not generally known for powerful waves, according to Olympic surfing forecaster Kurt Korte. The beach is popular for surfing in Japan — but is hardly a world class location like Hawaii or Tahiti.

Surfers again had powerful waves from the storm but were gifted Tuesday with rain that tamed the winds — as ideal a forecast as could be expected this time of year for this beach.

For photographers trying to capture the moments, the contrast of murky water makes an image pop even more than during sunny, placid days with bluer waves. The three layers — competitor on surfboard, foamy waves and background water — are brought out in even more stark relief, adding to the drama.