Gymnast Oleg Verniaiev out of Olympics after doping ban 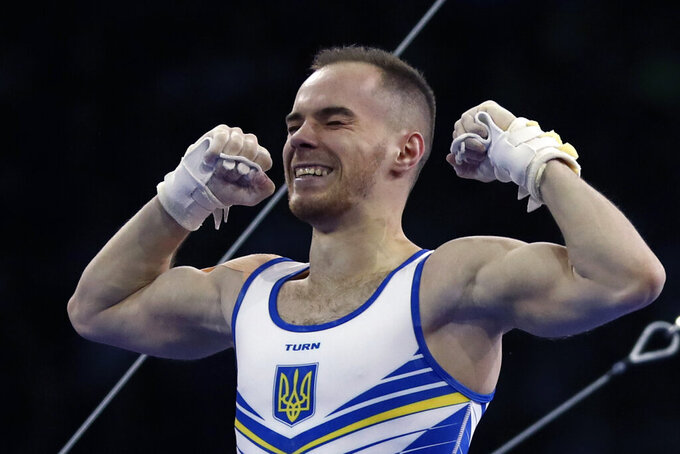 FILE - In this file photo dated Friday, Oct. 11, 2019, Oleg Verniaiev of Ukraine celebrates after his performance on the horizontal bar in the men's all-around final at the Gymnastics World Championships in Stuttgart, Germany. Olympic champion gymnast Oleg Verniaiev will miss the Tokyo Games after testing positive for a prohibited drug and banned for four-years Tuesday July 13, 2021, by the Gymnastics Ethics Foundation. Verniaiev denies wrongdoing and says he will appeal the ruling. (AP Photo/Matthias Schrader, FILE)

KYIV, Ukraine (AP) — Olympic champion gymnast Oleg Verniaiev is set to miss the Tokyo Games because he has been banned for four years following a failed drug test.

The Ukrainian gymnast tested positive for the banned substance meldonium in August 2020 and was banned after a ruling by the Gymnastics Ethics Foundation, which hears disciplinary cases in the sport.

The ban is backdated to run from November 2020 and could also rule him out of the 2024 Paris Olympics. Verniaiev was also ordered to pay nearly 5,600 euros ($6,600) in costs, the GEF said in its statement Tuesday.

Verniaiev denies wrongdoing and said he will appeal the ruling to the Court of Arbitration for Sport.

“The main question is how a banned substance got into my body?” he wrote in an Instagram post Tuesday. “Why did it happen at a time when there were no serious international competitions and there was only light training taking place?”

Verniaiev won gold on the parallel bars at the Rio de Janeiro Olympics in 2016 and was the silver medalist in the all-around, in a dramatic, close loss to Japan's Kohei Uchimura. Since then, his competitive appearances have been limited by injuries and the provisional suspension imposed last year following his failed test, though he won all-around bronze at the last world championships in 2019.

A positive test for meldonium led to tennis star Maria Sharapova serving a 15-month ban. Sharapova said she did not know it had been banned shortly before her positive test.

Meldonium is a heart medication developed in the then-Soviet Union and was banned in sports from 2016.

It was also the substance which caused Russian curler Alexander Krushelnitsky to be stripped of a bronze medal at the 2018 Winter Olympics. Two Russian rowers were removed from their country's Olympic squad last week after positive tests for meldonium.