Home of the huge: China has long history of going really big 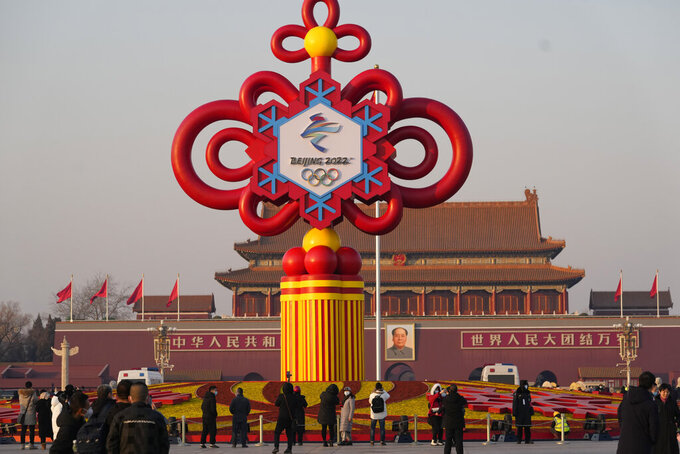 Residents look at a gigantic red ribbon 2022 Winter Olympics sculpture on Tiananmen Square in Beijing, China, on Jan. 18, 2022. China has thousands of years of doing things in a really big way, reinforcing its perceived place in the world and the political power of its leaders — from emperors to Mao Zedong to Xi Jinping. None of this bigness is new. It goes back to a dozen dynasties that ruled China for thousands of years, a tradition of projecting power that was adopted by the Chinese Communist Party when it came to power in 1949. It could be termed simply: big, bigger and biggest — and then some. (AP Photo/Ng Han Guan)

China has thousands of years of doing things in a really big way, reinforcing its perceived place in the world and the political power of its leaders — from emperors to Mao Zedong to the current leader, Xi Jinping.

Beijing becoming the first city to hold both the Winter and Summer Olympics may not be a feature on the actual landscape. But it's in the same realm for the world's most populous country, which has long framed itself at the center of the world, evident in its name in Chinese, “Zhongguo,” or “middle country.”

This affinity for bigness isn't new. It goes back to a dozen dynasties that ruled China for thousands of years — one of which re-created an entire army of terra cotta warriors to be buried with an emperor. It's a tradition of projecting large-scale power that was adopted by the Chinese Communist Party when it took over in 1949.

Writing in his book “Mandate of Heaven,” U.S. China scholar Orville Schell explained how Mao, who led China's communist revolution, expanded Tiananmen Square in the 1950s to make it the largest public square in the world — 100 acres.

That's five times larger than Moscow's Red Square. And Mao even went the Russians one better by adorning the square with Soviet-style architecture, the most famous of which is the Great Hall of the People. Eventually, after Mao's death in 1976, the square came to include his imposing mausoleum.

Schell wrote of Tiananmen, calling it “a propagandist’s dream come true. Everything about it was gargantuan.”

The colossal begins with the country's population of 1.4 billion and extends to public buildings all around China. Towering apartment blocks — some Soviet-inspired, others thrown up in a binge of modern development in the last few decades — are typically set far back from 10-lane avenues, shrinking the size of pedestrians on road-size sidewalks.

The vastness reaches to shopping malls, commercial spaces and to buildings like the Bird's Nest stadium, a 91,000-seat colossus put up for the 2008 Olympics and used a week ago for the opening ceremony of these Winter Games.

A shopping mall in the western city of Chengdu, the New Century Global Center, is billed as the largest building on Earth. How big? Three Pentagons could fit inside. Or at least 300 football fields.

Add the Beijing headquarters of China Central TV, a 768-foot (234-meter), two-leg tower known around town as “Big Underpants" for its unusual design. Architect Rem Koolhaas famously said the building “could never have been conceived by the Chinese and could never have been built by Europeans. It is a hybrid by definition.”

Then there's 40,000 kilometers (25,000 miles) of high-speed rail lines, and the Belt and Road Initiative — often described as the New Silk Road. Many view it as the largest building project in history, stretching from China and East Asia to Europe and consisting of rail lines, ports, highways and other infrastructure projects to expand China's trade and influence. Critics warn of the unsustainable debt burden for many participating countries.

China’s attack on COVID-19 is fittingly mammoth, too, capable of locking down millions in a show of state power built partly on Orwellian surveillance architecture. Need a medical facility? During the pandemic, China built 1,000-bed hospitals in 10 days.

Maria Repnikova, a China specialist at Georgia State University, termed China’s policy of going large as the “politics of grandeur,” something that reaches beyond concrete to include scholarships for foreign students, exchanges, training, and economic aid.

“The idea is to give more to impress upon external audiences that we have so much to give you, that nobody else can compete with that,” Repnikova said in an interview.

“The first thing you see (in China) is the intensity of the scale, whether it’s the presidential buildings or whether it’s other sites or Olympic venues. That’s something that at first catches someone’s eye, and then it makes one wonder — how have they done it?”

But in the China context, what does big really mean? It's impressive and can literally change the landscape. Yet there's massive meaning, too, in the thinking behind it — particularly for a government that has long prized the projection of control outward to its sometimes disobedient hinterlands.

“Authoritarian use of political symbols and propaganda can serve two purposes: to persuade audiences of the regime’s legitimacy, and to demonstrate state power,” Sheena Greitens, who researches China at the University of Texas at Austin, wrote in an email.

“I suspect that Beijing will use both during the Olympics, presenting domestic and international audiences with humanizing stories about ordinary Chinese people while also making sure they witness impressive displays of the CCP (Chinese Communist Party) and state power.”

Diana Fu, a China expert at the University of Toronto, said authoritarian states often build in a systematic way that she terms “spatial governance,” which helps them put down any protests or insurrections.

“Small, winding streets and dense neighborhoods can foster a sense of neighborly feelings and trust, which is critical for collective action,” Fu wrote to AP. “In contrast, large boulevards and predictably geometric patterns of streets and districts allow the state to better surveil and control its population. Authoritarian states like contemporary China are able to do so while facing little opposition from civil society."

For the 2008 Olympics, China even tried to control the weather, claiming to make rain to clear the polluted skies, and then drive rain away when it was called for. The rainmakers had installations outside Beijing, where peasants donned military fatigues and helmets and used anti-aircraft guns and rocket launchers to blast the sky with silver iodide, hoping to coax rain from the clouds.

Sixty years ago, during the Great Leap Forward, Mao Zedong made extravagant claims about new agricultural techniques that could lift China out of starvation. His plans to beat nature were based mostly on ideology and pseudo-science and caused widespread famine.

“Authoritarian parties and leaders try to create a sense of unassailability,” Alexander Dukalskis, who teaches international relations at the University of Dublin, wrote to AP. “Through symbols and displays of state power they communicate that their rule is inevitable and that challenges are bound to be fruitless."

He added: "Projections of state power are also useful for an international audience: They can convince other states or companies that if they step out of line, then they can be punished.”

AP Sports Writer Stephen Wade lived in Beijing for 2 1/2 years covering the run-up to the 2008 Beijing Olympics and their aftermath.