A hug, a wave, a big win for American mixed doubles curlers 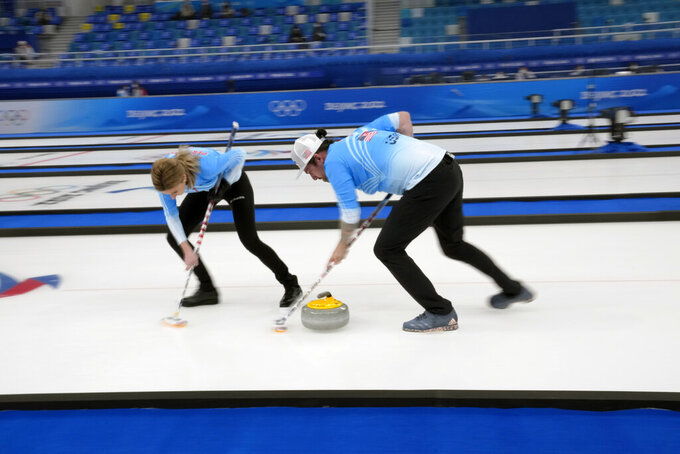 BEIJING (AP) — American mixed doubles curlers Vicky Persinger and Chris Plys survived an extra end against Sweden for a much-needed victory in the Olympics on Friday, quickly hugged and then found two friendly faces to wave to in a far corner of the eerily quiet and mostly empty Ice Cube.

Masked faces, of course, but definitely friendly faces. Persinger and Plys were pretty sure they were waving at team psychologist Carly Anderson and dietician Kaela Colvard, who were among the few spectators who saw the Americans take an 8-7 victory in the round-robin competition to even their record at 2-2.

“It’s hard to tell with the masks on. I think it was our sports psychologist and our dietician who were in the stands,” Persinger said. “They’ve kind of been our team around our team and were cheering us on especially coming back after a two-loss day.”

Every little bit helps in these Games, which are being conducted in a bubble environment because of COVID-19. That means family can't attend. With few spectators allowed in, it’s a far different atmosphere than at the 2008 Summer Olympics, when raucous crowds watched Michael Phelps win a record eight swimming gold medals in the same venue, which was then called the Water Cube.

“We can’t even say enough good things about Carly our sports psychologist and Kaela and our whole team,” Plys said. “It’s been hard on everybody. It’s been hard on them, but they’ve taken a back seat to the way they’re feeling and really made sure that we’re taken care of and in a good spot to keep playing."

The victory moved the Americans into a tie for fifth with China and the Czech Republic in the 10-team field. After the round robin, the top four teams move into the semifinals.

It also put Plys and Persinger in a great mood heading into the opening ceremony a few hours later, when they would follow men’s skip and defending gold medalist John Shuster, the first curler voted to carry the American flag, into the Bird’s Nest.

“Hell yeah, man, it’s going to be awesome,” said Plys, a two-time Olympian who is also on the men’s team. “Before we left for this trip, being able to walk in the ceremonies was already going to be a highlight. Getting to do that with my teammate holding a flag, it’s going to be a night to remember. I’ll probably have the phone strapped to my chest just so I can still soak it all in and be there and enjoy that experience with all of our teammates.”

The Sweden-U.S. game was the last of Friday’s four games to end. The teams swapped leads through the eight ends, including Sweden jumping ahead after a three-ender to go up 5-4 in the sixth and the United States coming back with a three-ender of its own in the seventh for a 7-5 lead. Sweden tied it in the eighth and the Americans won it in the ninth. Plys had a huge shot that cleared two Swedish stones out of the house.

“It’s as exciting for us as it is for the people back home,” Plys said. “I over-swept Vicky’s to give them a shot for three, but I went right down to the other end and it was just like, ‘Let’s get it right back.’ That’s mixed doubles curling. You don’t see that as much in men’s or women’s, but mixed doubles, man, it’s volatile and the swings are crazy and a lot of times it’s which team can manage their emotions through those swings better.”

The Americans lost twice on Thursday.

“We lightened up a little bit,” Plys said. “We had a talk before in the locker room before, had some good jams going and just decided that we were going to forget about all the pressure and everything that happened yesterday and play for each other and play for our families and just have as much fun as we can out there.”

Italy moved to 4-0 with a 10-2 victory against the Czech Republic. Australia, making its first appearance in Olympic curling, remained winless after losing 9-8 to Britain in an extra end.