Humphries has big lead for US at midpoint of Olympic monobob 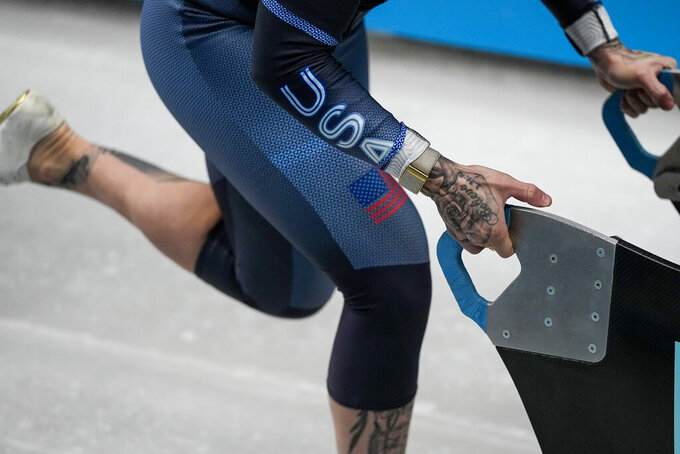 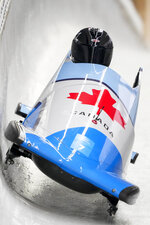 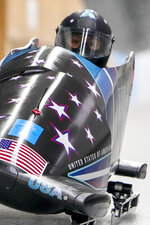 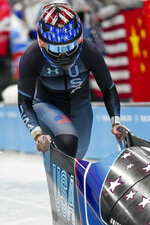 BEIJING (AP) — Usually at the midway point of an Olympic women's bobsled race, the standings are super close.

Kaillie Humphries' first day of Olympic competition for the United States was a runaway, putting the American in complete control of the inaugural women's monobob race. She leads Canada's Christine de Bruin — her former teammate — by 1.04 seconds, by far the biggest halftime lead in Olympic women's bobsled history.

The standings suggest otherwise. The five previous women's bobsled competitions at the Olympics — all of them being the two-person variety, unlike this new driver-only discipline — have seen the midpoint leader ahead of the field by an average of 0.16 seconds. The biggest halftime lead ever was 0.29 seconds.

“You pretend like today didn’t exist and have a fresh race tomorrow,” Humphries said. “Easier said than done, I can promise you that. But at the end of the day, I’ve had practice at doing it. And I’ve won, and I’ve lost in this position. And tomorrow is a brand new day. ... I have to continue to put my best foot forward."

“It’s a consistency race,” de Bruin said. “Anything can happen.”

Laura Nolte of Germany was third in 2:10.32, and three-time Olympic medalist Elana Meyers Taylor of the U.S. was right in the medal hunt — her time of 2:10.42 putting her fourth.

“It's a huge lead," Nolte said of Humphries' margin. “She was the one with the fewest mistakes, or nearly no mistakes."

Barring a big mistake by somebody, it looks like four women remain in the mix for the three medals. They’ll be decided on Monday morning in Beijing, late Sunday night in the United States, right after the Super Bowl broadcast. The gap between Meyers Taylor and fifth-place Huai Mingming of China is nearly a half-second.

“I know I can drive this track better," Meyers Taylor said. “I’m really just going to go tomorrow to try and have some fun. I drive the best when I’m having some fun. And with everything that’s been going on, I have not enjoyed myself. So tomorrow, I’m just going to let it roll and see what happens."

The Olympic experience, so far, has not gone as Meyers Taylor wanted. She tested positive for COVID-19 and had to give up the role as U.S. flagbearer for the opening ceremony. She was isolated and separated from her family. Her son, who turns 2 later this month, is usually by her side almost constantly; their visits have been limited to just a few minutes a day, if that, in Beijing because of virus protocols.

Her son, she said, has handled it better than his mom has. Meyers Taylor confessed that she's been brought to tears a few times in recent days.

“Isolation is not a good thing," Meyers Taylor said. “Everybody who’s been through it knows, but especially when you’re at the Olympics ... we lose all sense of control. You can’t even open your door. You can’t choose what you want to eat. You can’t choose anything. You get all your control taken away from you."

Humphries raced in three Olympics for Canada. She and Meyers Taylor are the only three-time medalists in women’s bobsled history; for Humphries, the haul has been two golds and one bronze.

And now she has a chance at two medals in Beijing, with women having two bobsled events on the Olympic program for the first time. She and Meyers Taylor were the athletes who led the fight for a second medal event, something that men’s bobsledders have had for decades.

“It took a team, a village, a country to get here," Humphries said.

Simply getting to Beijing was a challenge for Humphries on many levels. She left the Canadian program three years ago and began driving for the U.S.; in World Cup races and world championship events, she didn’t need citizenship to do so. But for the Olympics, she needed a U.S. passport — a process that she was told could take four years, and if true, would have rendered her ineligible for Beijing.

But the passport was acquired with just a few weeks to spare. And then she tested positive for COVID-19 last month, further threatening her Olympic hopes.

Now, passport in hand, virus issues behind her, all Humphries has to worry about is the sliding. She skipped the final day of training Saturday, hoping she'd done enough to get ready and trying to give herself a bit of rest before the first day of competition.

So far, so good. Day 1 could not have gone any better.

“It's not lost on me," Humphries said. “I know what it means to represent the United States. I am so proud and honored to be able to be here."