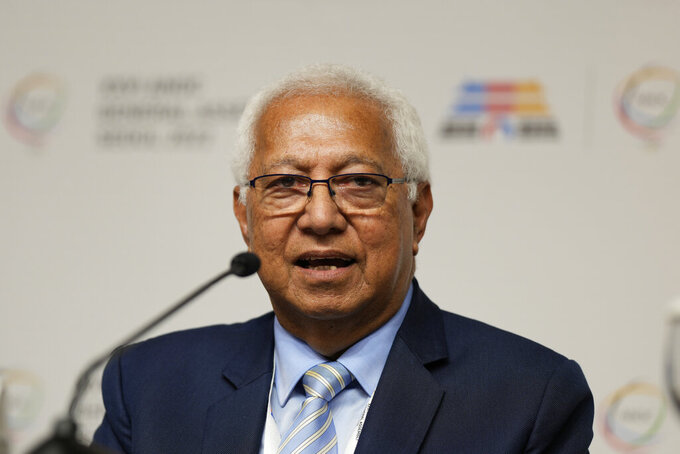 President of the Association of National Olympic Committees's, ANOC, Robin Mitchell answers questions during a news conference in Seoul, South Korea, Thursday, Oct. 20, 2022. The president of Iran’s national Olympic committee claimed Thursday that competitive climber Elnaz Rekabi will not be punished or suspended after competing in South Korea over the weekend without wearing her nation’s mandatory headscarf. (AP Photo/Lee Jin-man)

SEOUL, South Korea (AP) — The president of Iran’s national Olympic committee claimed Thursday that competitive climber Elnaz Rekabi will not be punished or suspended after competing in South Korea over the weekend without wearing her nation’s mandatory headscarf.

Supporters of Rekabi, however, remain worried for the 33-year-old climber as other athletes have been targeted by the government for supporting the weekslong protests rocking Iran. Activists say security forces already have killed over 200 people and arrested thousands in an ongoing crackdown on dissent.

Speaking to The Associated Press in the South Korean capital of Seoul, Mahmoud Khosravi Vafa said there was no reason to take disciplinary measures against Rekabi because not wearing a headscarf, or hijab, was an “unintentional” act on her part.

An Instagram account associated with Rekabi also described the decision as “unintentional,” and she did as well after reaching Tehran early Wednesday. She blamed being rushed to compete, though a video of her climb Sunday showed her relaxed and waving to the crowd.

“It’s a small issue. I’m surprised that it is being talked about so much," Khosravi Vafa said, despite protests over the mandatory hijab reaching over 100 cities in Iran so far. "In our view it was not a big issue.”

“I talked to her and told her that you definitely are very talented in sports and you should continue down this path to maybe qualify for the Paris Olympics and you’ll be fully supported by the Iranian Olympic committee,” he added in remarks made in Farsi.

The International Olympic Committee described Rekabi on Wednesday as having “returned to Iran safely and with her family.”

Khosravi Vafa, however, described Rekabi as being “a guest at Iran’s Olympic committee hotel for one day, along with her family.” It wasn't clear if Rekabi had a choice over the stay. A later image published by Iranian state media showed her in a meeting hours after returning to Tehran in the same black baseball cap and hoodie she wore after her flights.

Khosravi Vafa said Rekabi would return to her hometown Thursday.

Rekabi's competition without a hijab was seized upon by demonstrators who have protested for weeks in the Islamic Republic. Hundreds of people gathered outside Imam Khomeini International Airport for her arrival and cheered a woman they called “Elnaz the Champion” and saw as an inspiration for their continued protests.

When asked whether he discussed the issue with Iranian delegates, Robin Mitchell, a Fijian sports official who was elected the new president of the Association of National Olympic Committees at the assembly on Thursday, said they had not spoken and indicated he wasn’t aware the Iranians were at the meetings.

Khosravi Vafa didn’t specifically address suspicions that Iranian authorities confiscated Rekabi’s passport after the event in Seoul and forced her to leave early.

Iran has been swept by nationwide protests since the Sept. 16 death of 22-year-old Mahsa Amini, who had been detained by the country’s morality police over her clothing.

The demonstrations, which have prompted women to remove their hijabs in public, have drawn school-age children, oil workers and others to the streets and represent the most serious challenge to Iran’s theocracy since the mass protests surrounding its disputed 2009 presidential election.