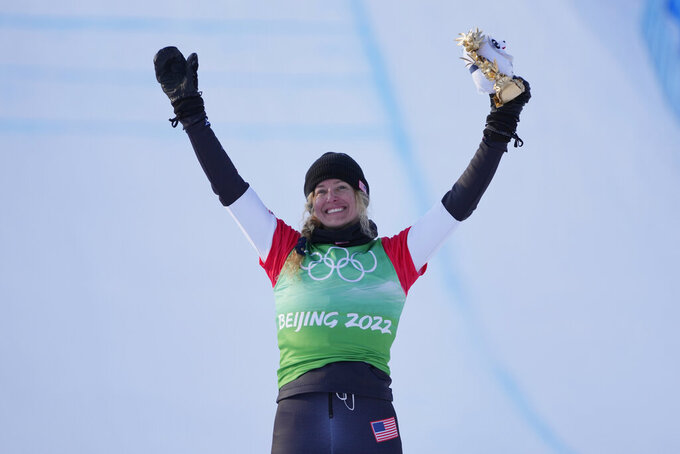 Let that sink in for a moment because Jacobellis has been trying for 16 years.

Jacobellis helped make the wild sport of snowboardcross famous. Who could forget her premature celebration as she approached the finish line in the 2006 Turin Games, an ill-timed board grab that sent her tumbling out of the lead? In a way, she became one of the best-known silver medalists of all time.

Now Jacobellis will be remembered as the first American gold medalist at the Beijing Olympics. She reached the top of the podium hours after Mikaela Shiffrin had another stunning early exit on the Alpine ski hill.

Jacobellis rode hard to the finish of the snowboardcross final on Wednesday, beating Chloe Trespeuch of France and covering her heart with her hands as she slowed.

Jacobellis was 20 when she made the mistake in Turin. Now 36 and in her fifth Olympics, she became the oldest U.S. woman to win a gold. The 16 years is also the longest gap between medals for any U.S. woman.

She never stopped reaching for a gold medal.

“They can keep talking about it all they want because it really shaped me into the individual that I am,” Jacobellis said. “It kept me hungry and really kept me fighting in this sport.”

A glum Olympics for the Americans actually began to brighten a few hours earlier when California snowboarders Chloe Kim and Shaun White, the defending gold medalists, had joyful rides through the halfpipe. Kim earned the top spot in women’s qualifying while White, a three-time gold medalist in his fifth and final Olympics, was fourth in the men’s qualifying.

“This feels incredible because the level that all the women are riding at today is so much higher than it was 16 years ago,” Jacobellis said.

Jacobellis said she’d advise young riders to not let mistakes define them. “Especially if you’ve made it to this stage, you’re a winner. And look at what you’ve learned from the experience and take that with you later in life.”

Mikaela Shiffrin arrived in Beijing heavily favored to add to her collection of two Olympic gold medals but instead is 0 for 2, a shocking development that has left her shaken.

She skidded out just a few seconds into the slalom, a quicker exit than two days earlier when she crashed out of the super-G.

“I’ve never been in this position before and I don’t know how to handle it,” said the teary-eyed Shiffrin, who won the slalom at the 2014 Sochi Games and the giant slalom at the 2018 Pyeonchgang Games.

The seventh racer on Wednesday, she began losing her balance and teetering out of control just four seconds and four gates in. She swerved too far as she veered to her right and she ended up way wide of the fifth gate.

“I was pushing and maybe it was past my limit.”

There was nothing left to do but ski to the side of the course known as the Ice River, click out of her skis and sit on the ground, her head resting in her arms.

“GS and slalom, those were my biggest focuses. So it really feels like a lot of work for nothing,” she said.

Shiffrin had planned on entering all five individual Alpine races. Her next opportunity could come Friday in the super-G, but she raised doubts about that.

“It would be a pleasure to ski. But I also have some teammates who are really fast, and we have the athletes who can fill the spaces. So if I’m going to ski out on the fifth gate, like, what’s the point?” she said.

Shaun White failed on his signature trick on his first run down the halfpipe, the Double McTwist 1260, and was in 19th place in men’s qualifying. But the defending Olympic champion came back in his second try and nailed the same run to make it through to the medal round.

The 35-year-old stomped every landing and when he reached the bottom, he tore off his goggles and let out a “Yeahhhh.” He qualified behind two-time silver medalist Ayumu Hirano, 2018 bronze medalist Scotty James and Hirano’s Japanese teammate, Ruka Hirano.

“I can’t tell you the relief I felt off that last hit,” White said. “It was just the thrill and excitement to be going to finals.”

Defending women’s Olympic champion Chloe Kim breezed through qualifying with a score of 87.75. The 21-year-old cranked it up in her second run but fell on her switch backside 720. She raised her hand as if to say, “Oh well” and playfully stuck out her tongue while waiting for her score.

Mitsuki Ono of Japan was second in qualifying and Cai Xuetong of China was third. American Maddie Mastro finished just outside of the top 12 who advanced to Thursday’s final.

Birk Ruud of Norway won the gold medal in the Olympics’ first men’s freestyle big air event and then honored his father, who died of cancer last year.

After landing at the bottom of Big Air Shougang and unfurling a Norwegian flag, the 21-year-old pulled down his sleeve to reveal a gold bracelet, a gift from his father.

“Papa, you’re with me,” he said, tapping his heart.

Hwang Daeheon became the fourth South Korean in six Olympics to win the gold medal in the men’s 1,500-meter short track speedskating when he stuck his skate in front in a tight finish of the 10-man final. Six skaters lined up on the start and the other four in back, and the pack circling the rink looked more like a relay than an individual final.

Tobias Wendl and Tobias Arlt won their third straight Olympic doubles luge gold medal, holding off German teammates Toni Eggert and Sascha Benecken by 0.099 seconds. Germany is 3 for 3 in luge gold medals at the Beijing Games and will go for a sweep in the team relay.