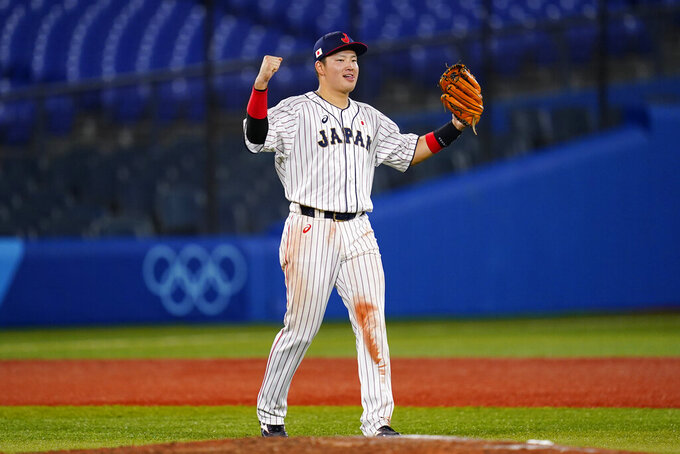 YOKOHAMA, Japan (AP) — Japan's players sprinted onto the mound and the collection of All-Stars hoisted their manager up and down as if on a trampoline.

They beamed when hanging shiny gold medals around each other's necks, fullfilling a national mission with the first Olympic baseball title in their history.

American players didn't seem overly upset. The released veterans, prospects and career minor leaguers thought they had given their best.

“I really feel like we left it all out there," pitcher Nick Martinez said after Japan eeked out enough runs to win Saturday night's gold-medal game 2-0.

Munetaka Murakami, at 21 the youngest player in Japan’s starting lineup, hit an opposite-field homer over the 16-foot wall in left-center on a 2-2 pitch from Martinez (1-1) in the third. Martinez winced as the ball landed in the fourth row of the empty blue seats.

“I thought we had him set up nice for a changeup there," Martinez said. “Just a nice piece of hitting,"

Japan added an unearned run in the eighth when Tetsuto Yamada singled off reliever Scott McGough leading off, Hayato Sakamoto sacrificed, Masataka Yoshida singled and center fielder Jack López heaved the ball past the plate for a run-scoring error.

Masato Morishita (2-0), a 23-year-old right-hander, gave up three hits over five innings, struck out five and walked none.

Kodai Senga, Hiromi Itoh, Suguru Iwazaki and Ryoji Kuribayashi finished a six-hitter, and the Japanese men (5-0) matched the accomplishment of the women’s softball team, which upended the Americans by the same score for their second straight gold medal.

“They deserved to win,” said U.S. manager Mike Scioscia, denied in his attempt to match the feat of his mentor, late Los Angeles Dodgers manager Tommy Lasorda, who led the U.S. to the 2000 gold medal.

Japan manager Atsunori Inaba, a former All-Star and batting champion, said the medals seemed shiny and felt heavy. He was proud the Samurai showed off their brand of baseball, which relies on defense, bunting and advancing runners, in defeating the American variety dependant on power and increasingly dominated by the Three True Outcomes: home runs, strikeouts and walks.

“Our team played really under such different circumstances than they usually face back in the States in a normal season. Every game was a Game 7,” Scioscia said. “We got within a couple breaks of winning the gold medal."

Several hundred people who appeared to be team staff and Olympic volunteers cheered on the host nation in a largely empty 34,000-capacity Yokohama Stadium, some wearing orange Japan jerseys and matching facemasks on the warm and humid night.

America, the nation that introduced baseball to Japan in 1872, finished 4-2. Teams were denied access to all 40-man roster players and many eligible top prospects by Major League Baseball and its clubs, hindering the U.S. and other countries whose top stars are in MLB.

Baseball was contested in the Olympics for just the sixth time, the first since 2008, restored at the request of Japan as the host nation. It already has been dropped for the 2024 Paris Games but may return for 2028 in Los Angeles and 2032 in Brisbane, Australia.

“Baseball is played in so many countries around the world and it continues to keep growing,” Scioscia said. “And I think that it’s an incredible oversight not to have baseball included as a perennial sport in the Olympics."

Frazier spoke next, and in making the case for baseball's inclusion, he inadvertently pointed out who was missing: the current generation's best.

“It's the excitement, emotion, the enthusiasm,” he said. “Little kids, focused on trying to be the next Mike Trout or the next Jacob deGrom.”

While the Japanese team lacked MLB stars Shohei Ohtani and Yu Darvish, it was the class of the six-nation field.

American pitchers led the Olympics with a 1.58 ERA to Japan’s 2.28, but American batters hit .236, well below Japan’s .287 and South Korea’s .302. The U.S. stranded nine runners in the gold medal game and went hitless in four at-bats with men in scoring position.

Frazier hit .143 (3 for 21) with one RBI and fell short in adding gold to the Little League World Series title he won with Toms River East American in New Jersey in 1998.

Second baseman Eddy Alvarez became just the third American and sixth athlete overall to win medals at the Winter and Summer Games. He had hoped for gold but went 6 for 24 with three RBIs and matched the silver he earned as a speedskater in 2014.

“Feels like déjà vu," Alvarez said. "It’s just as heavy as the other one. Same color, little different design, but it’s still an incredible journey, an incredible experience.

"It’s a tough pill to swallow when you’re so close to winning and you fall short, but at the same time it’s one of those things that I know will hit me eventually, of how incredible and blessed I am to be a part of this.”

Kuribayashi gave up a one-out single in the ninth to Nick Allen, then retired López on a forceout for his third save — with Alvarez on deck.

"It is kind of a strange feeling,” Tanaka said through a translator.

After the initial celebration, Japan’s players lined up on the third base line and bowed to their supporters, then to the U.S. team.

Scioscia, standing in front of the first base dugout, tipped his cap in reply.

No feelings of sadness. Instead, adminiration.

“It's been a great experience, man,” Frazier said. “I can't say it enough.”