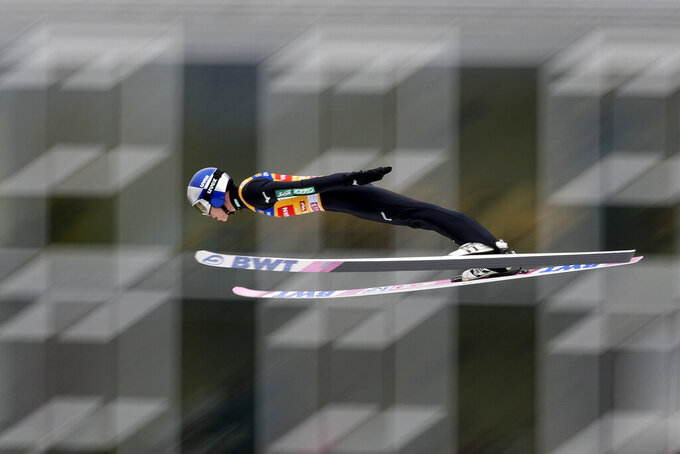 FILE -Ryoyu Kobayashi of Japan soars through the air during his second trial jump at the third stage of the 70th Four Hills ski jumping tournament in Innsbruck, Austria, Monday, Jan. 3, 2022. Even World-class athletes who compete in ski jumping and a former Olympian paid to analyze the sport have no idea who will win gold in Beijing. Defending Olympic champion Kamil Stoch has an injured left leg that is knocking him out of World Cup competition this week in his native Poland and puts his status for the 2022 Winter Olympics up in the air. Japan's Ryoyu Kobayashi is the world's top-ranked ski jumper. (AP Photo/Matthias Schrader, File)

Even athletes who compete in ski jumping and a former Olympian paid to analyze the sport on TV have no idea who will win gold at the Beijing Games.

That’s because more than a dozen men seem to have a shot.

Three-time Olympic champion Kamil Stoch has an injured left leg that is knocking him out of World Cup competition this week in his native Poland, and the ailment jeopardizes his chances of competing in the Olympics next month.

Stoch won on the large hill at the 2018 Olympics, elevating his status as a superstar in a country obsessed with ski jumping. He rose to fame at the Sochi Games in 2014, when he won on the large and normal hills.

If Stoch can't compete in China, there are plenty of contenders ready to soar and take one or both of his titles.

Japan’s Ryoyu Kobayashi is the world’s top-ranked ski jumper and Germany’s Karl Geiger is right behind him. Some talented and experienced Norwegians — including three-time Olympic medalist Robert Johansson — are expected to also contend in a wide-open competition.

“Ski jumping is a sport that’s about what have you done for me lately and it’s all about who can get hot at the Olympics,” said NBC analyst Johnny Spillane, a three-time Nordic combined Olympian. “It’s not uncommon to have a surprise winner.”

Ski jumping will be held in the mountainous Zhangjiakou competition zone, about 100 miles (160 kilometers) northwest of Beijing.

The men will compete individually on the normal hill Feb. 6 and on the large hill on Feb. 12.

The women will go for gold on Feb. 5 in an individual competition and for the first time, they will be part of a mixed team event with men on Feb. 7.

Ski jumpers have competed at the Olympics since the first Winter Games in 1924.

With technological advances in suits and skis, the fearless athletes approach 60 mph (about 100 kph) before launching themselves off a jump and soaring the length of an American football field plus the end zones.

Ski jumpers lean forward in flight, nearly parallel to their skis that form a V to take advantage of aerodynamics. They earn points for distance as well as style, which is scrutinized by five judges with the low and high scores eliminated.

Maren Lundby chose not to defend her Olympic gold in women's ski jumping, saying she didn’t want to make the sacrifices necessary to fight her body’s natural changes and compete at a top level in Beijing.

The sport has attempted to address eating disorders that have historically been a problem, with rule changes designed to make it a disadvantage to cut too much weight. The laws of physics give lighter jumpers an advantage, and some have been willing to go to extreme measures to be thin to win.

“It was a bigger issue in the past, but it will always be part of the conversation,” Spillane said. “Lundby is fantastic and I'm sorry she's taking the Olympics off.”

Austria’s Marita Kramer has been dominant on the World Cup circuit, winning events in November and December after finishing first in three consecutive competitions last March.

Sara Takanashi of Japan, who earned bronze at the 2018 Pyeongchang Olympics, won her 61st World Cup title earlier this month to extend her record for a female or male ski jumper.

“Kramer is the strongest jumper and when she's on, she's tough to beat,” Spillane said. “Takanashi is the winningest ski jumper of all time — among men or women — but she doesn't have a gold medal from the Olympics yet.”

Ammann won two more golds at the Vancouver Games in 2010. He appears to be well past his prime, ranking No. 35 in the World Cup standings. But if he can somehow win a fifth Olympic gold, he would break the record he shares with the late Matti Nykanen of Finland. With any medal, Ammann would match Nykanen's mark for the most Olympic medals in the sport's history.

The fifth and final gold medal in ski jumping will be awarded Feb. 14 in a team event. Norway, Germany and Austria have won the last three Olympic team events. The trio of traditional powers will likely contend for medals. Slovenia also has a shot to earn a spot on the podium.

Kevin Bickner won the U.S. trials last month, helping him earn a trip to the Olympics for the second time. The 25-year-old Bickner, who learned how to jump in suburban Chicago at the Norge Ski Club, finished 18th on the normal hill and 20th on the large hill at the Pyeongchang Games.

The United States women's ski jumping team did not qualify anyone for the Beijing games. USA Nordic is developing a lot of young jumpers, including 21-year-old Wisconsin native Anna Hoffman, who won the U.S. trials, and hopes to have competitors at the 2026 Olympics in Italy.