Judo in Japan: Getting unwanted scrutiny for abuse, violence 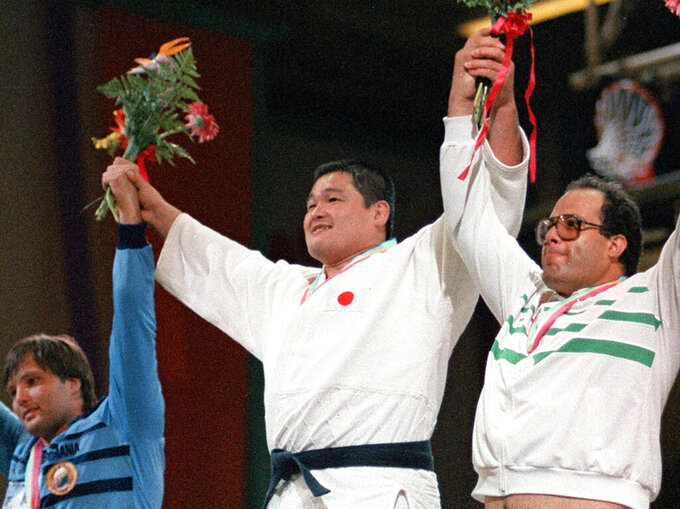 Japan's Yasuhiro Yamashita, center, celebrates winning gold medal at a judo match of the 1984 Los Angeles Olympics in Los Angeles on Aug. 11, 1984. Yamashita overcame a leg injury to win a gold medal at the Olympics, limping to the awards-ceremony podium. He preaches judo’s appeal comes from building one’s body and character. (Kyodo News via AP)

TOKYO (AP) — Japan is the home of judo, and the 19th-century martial art is sure to get more attention at home than any other sport at next year's Tokyo Olympics.

But it’s also drawing unwanted scrutiny over widespread allegations of violence, and accompanying injuries, abuse, and more than 100 deaths in Japan over the last several decades attributed to judo and its military-like training methods.

“I feel it is sad judo is being perceived as extremely dangerous, and Japan’s judo world must take this seriously,” Yasuhiro Yamashita, the head of the All Japan Judo Federation, told Associated Press in an interview at his office.

Yamashita is also an Olympic legend — an Olympic gold medalist, an International Olympic Committee member, and the president of the Japanese Olympic Committee. He acknowledged forthrightly that the problems are serious in Japan with some injuries happening through punishment in training.

The national judo hierarchy says it has been focused on a fix for several years, but more needs to be done.

“The problem is that the message has not reached everyone at the grassroots level yet," Yamashita said.

Yamashita overcame a leg injury to win a gold medal at the 1984 Los Angeles Olympics, limping to the awards-ceremony podium. He preaches judo’s appeal comes from building one’s body and character.

“You share joy with your team, you respect your opponent, you learn self-control. You can learn so much, not just winning or losing,” said Yamashita, who became the head of the Japanese Olympic Committee last year after his predecessor resigned in a bribery scandal.

Judo, designed to use an opponent's force to generate throws and pins, means the “gentle way” in Japanese. But critics say the way it’s playing out in Japan has been anything but.

From 1983 to 2016, 121 deaths were reported in judo in Japan, according to the Japan Judo Accident Victims Association. That number covers schools, but not extracurricular dojos — schools for martial arts — for which there are no data.

The “tough-love” training has come at a high cost. In 2019, a fifth-grader died from a blood clot after hitting his head during sparring. In a separate case, also last year, a fourth-grader was severely injured after getting thrown, according to the victims’ association.

The popularity of judo in Japan also appears to be waning, compared with other sports such as baseball and soccer.

Michel Brousse, an expert on judo in France and elsewhere, believes the problems are so serious that there is “no future for judo” in Japan unless they get addressed soon.

“No other country in the world has so many injuries,” Brousse said in a telephone interview.

One problem is that judo teachers in Japan tend to be good at judo, but not at dealing with the physical and psychological needs of youngsters, said Brousse, a seventh-degree black belt who recently retired from teaching at Bordeaux University.

Sexual abuse is also a problem.

In 2011, Masato Uchishiba, a two-time Olympic gold medalist, was arrested on charges of sexually assaulting one of his judo students. He pleaded innocent, saying the sex was consensual. He was convicted and sentenced in 2013 to five years in prison.

A recent report by Human Rights Watch on sports organizations in Japan, including judo, said a standard for sanctions of abusive coaches was lacking, complaints weren’t being properly handled, and public data on abuse reports or investigations weren’t available.

Noriko Mizoguchi, an Olympic silver medalist teaching at Japan Women’s College of Physical Education, who has also taught in France, recalled her students in France called her “Noriko.” This is unthinkable in rigidly hierarchical Japan.

In Japan, a judo student is expected to just answer with a shouted “Hai,” or “yes,” and never address a superior by first names, Mizoguchi said.

In Japan, beatings and harassment are also part of judo's Spartan-style methods, thinking rooted in the nation’s brutal militaristic training, before and during World War II, she said.

A ban on corporal punishment was declared law in Japan only this year. Pressures are extremely high in Japan to win medals and trophies. Students and parents have kept silent, and abusive coaches have gone unpunished.

“I feel I must speak up to stop the violence because I love judo, and I was getting afraid lives would be lost,” Mizoguchi said.

“We have just come halfway, and there is definitely more work to be done.”

Keiko Kobayashi, a representative of the judo victims’ association, stressed safe judo is possible, noting that not a single child has been reported to have died from judo in the last 20 years in the U.S., France, Australia, and Britain.

Kobayashi’s son suffered a brain hemorrhage 16 years ago after his junior high school teacher penalized him with judo choke holds and throws, leaving him seriously injured. The reason: He had refused to go to a sports-oriented high school the teacher had recommended.

In a pattern that critics say gets repeated over and over, the teacher’s actions were ruled an unfortunate accident. Kobayashi stressed she is not opposed to judo, just the violence in judo.

“I am simply determined to be the last person who has to go through such suffering,” she said.