Knierim, Frazier give US first pairs world title since 1979 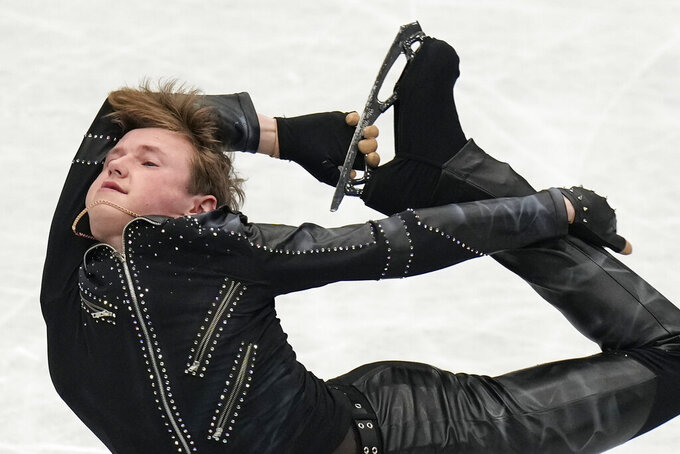 Alexa Knierim and Brandon Frazier became the first American pairs team to win the figure skating world championship in more than 40 years, performing a clean program Thursday minutes after watching teammate Ashley Cain-Gribble taken off the ice on a stretcher in Montpellier, France.

Knierim and Frazier played it somewhat safe in their free skate, doing a double toe loop rather than a triple on their first jumping pass. But their side-by-side triple salchow was perfect and the rest of their program a dramatic coronation for the first American champions since Tai Babilonia and Randy Gardner stood atop the podium in 1979 in Vienna.

“I couldn't ask for a better way to end the season,” Frazier said. “For Alexa and I, this was such a personal journey. To finish the season on this kind of program — I've dreamed of this moment so many times, but this is even better.”

She appeared to be immobilized for a moment before eventually getting to her feet. Cain-Gribble took a seat on a stretcher and was in tears as her parents, who also serve as their team's coach, accompanied her off the ice.

Earlier in the day, Olympic bronze medalist Shoma Uno performed flawlessly to a Vivaldi concerto to edge silver medalist Yuma Kagiyama to lead a Japanese sweep of the first three spots after the men's short program.

Uno scored 109.63 points for his program for the second-highest score in the world this season behind Olympic champion Nathan Chen's program at the Beijing Games. Kagiyama finished with 105.69 points while Kazuki Tomono edged 17-year-old American phenom Ilia Malinin by less than a point for third place.

“It is really difficult to put all the power I have in my training into the competition,” Uno said, “so I'm glad it worked out.”

The race for world medals is wide open after Chen, the three-time reigning champ, was forced to withdraw last week with an injury sustained in training. Yuzuru Hanyu, the two-time world champion, also withdrew because of an injury.

Uno twice won the silver medal at the world championships, but he's never climbed to the top step of the podium. He'll try to finish off a remarkable career resurgence when he performs his entertaining “Bolero” free skate on Saturday.

“In the past three years I have changed so much,” he said. “Three years ago I was skating toward the end of my career, but now I am skating for the future. I am amid the journey of my growth, so I want to show that.”

Malinin dominated the Junior Grand Prix series this season and was second at the U.S. championships in January, where he unleashed some of the incredible jumps that earned him the nickname “QuadGod.” But he was somewhat controversially left off the American team for Beijing in favor of veteran Jason Brown, who went on to finish in a respectable sixth place.

Now, the son of Russian-born Uzbekistani skaters Tatiana Malinina and Roman Skorniakov is trying to stamp himself as the heir apparent to Chen in American figure skating and one of the favorites for the 2026 Winter Games in Milan and Cortina.

Malinin's teammate, Vincent Zhou, was sixth after the short program. But given what he went through during the Olympics, it felt like a win. Zhou performed poorly in the team competition, when the U.S. went on to win the silver medal, but tested positive for COVID-19 before he was able to take the ice for the men's event.

“The short program was definitely a great moment for me, all the stuff I've been through,” he said. “Obviously I want to skate well in the free skate. I've been skating well in practice. But simply being here is a big win for me, and I'm doing my best to enjoy myself out there, enjoy my time here in France and make the best of it.”