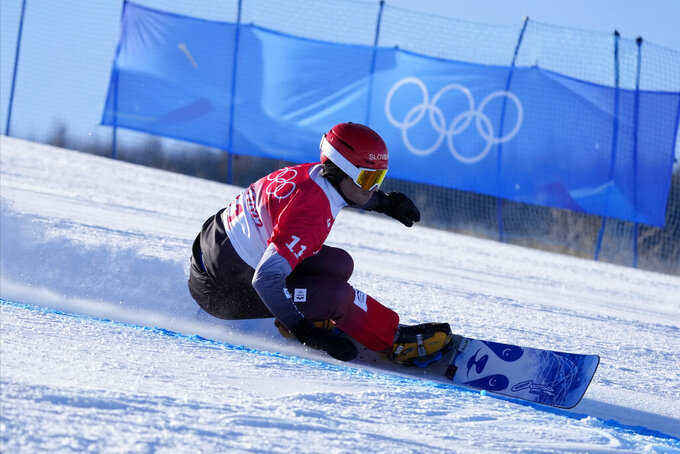 Something else, too: Both spent time in isolation leading into their races because of virus protocols.

For Kummer, it was 21 days away from other people after arriving for the Olympics instead of getting a COVID-19 vaccination.

For Kosir, it followed a positive COVID-19 test upon arriving in Beijing. He spent 11 days in isolation.

Both were out in the first heat Tuesday at Genting Snow Park. Just like that went Kummer, the 2014 Olympic champion, and Kosir, whose three Olympic snowboarding medals are the record — along with Shaun White, Kelly Clark, Jamie Anderson, Mark McMorris and Tuesday's winner, Benjamin Karl, and bronze medalist Vic Wild.

The time in isolation impacted the riders differently. The Swiss racer, Kummer, was convinced it wasn't a hindrance. Kosir, who is from Slovenia, felt the opposite.

“It’s difficult because there’s nothing to do,” said Kosir, who’s earned two bronze medals and a silver in his career. “You’re locked in the room. You have no information. It was tough for my mind."

Kummer described her quarantine as “no problem.”

“Everything's in your head,” she explained. “You can do good when you're prepared in your head.”

She said she got most of her strength work in before she left for China. In her room, she focused on working on her quickness.

Olympic rules called for all participants in the Beijing Games to either show proof of vaccination or spend 21 days away from contact with others upon arriving in China. Kummer defended her choice.

“Everybody needs to decide on their own and nobody’s in my body, so who the hell thinks they can decide for me?" she said. "I don’t care what everybody else thinks.”

She said she has acted as responsibly as anyone else over the course of the COVID-19 pandemic.

“I still have to do good things (so) that they don’t get the virus from me. And I’ve never been sick until now and that’s not that easy, right?" she said.

Kummer said those caring for her even gave her presents to celebrate the Lunar New Year holiday in China. She received a stuffed animal tiger and a piece of art with two pandas on it.

“It’s so crazy beautiful,” said Kummer, who lost to Julia Dujmovits of Austria.

Kosir never got a chance to fully dial in his setup. Three days after getting out of isolation, he was beaten by Roland Fischnaller.