The Latest at the Australian Open: 5th-seeded Sakkari wins 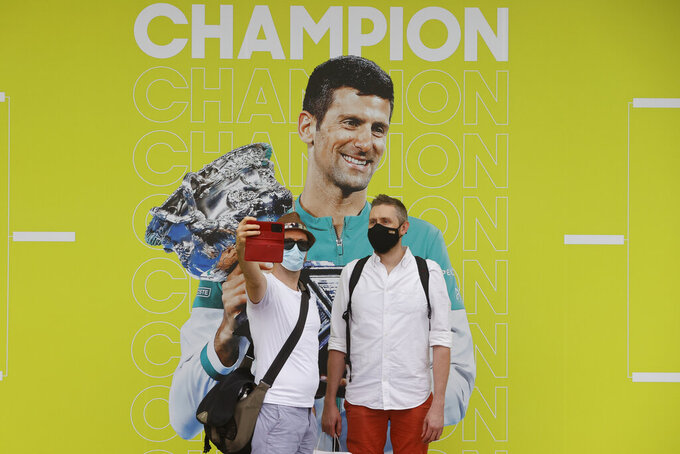 Fans take a selfie with a photo of defending champion Novak Djokovic of Serbia ahead of first round matches at the Australian Open tennis championships in Melbourne, Australia, Monday, Jan. 17, 2022. Djokovic was deported from Australia Sunday, Jan 16, after losing a bid to stay in the country to defend his Australian Open title despite not being vaccinated against COVID-19. (AP Photo/Hamish Blair)

MELBOURNE, Australia (AP) — The Latest on Monday from the Australian Open at Melbourne Park (all times local):

Fifth-seeded Maria Sakkari beat Tatjana Maria 6-4, 7-6 (2) in the first match completed on the main show court in the first Grand Slam tournament of the year.

She said the experience was “weird ... in a good way.”

“I was a little bit stressed, opening the tournament on this wonderful court,” she said. “It’s a privilege to have my first match here.”

Showing evidence of vaccination has been a requirement for all those entering Melbourne Park on Day 1 of the Australian Open, the morning after nine-time champion Novak Djokovic was deported for not meeting the country’s strict COVID-19 vaccination rules.

A security official with a loud speaker reminded people queuing outside the complex that hosts the first Grand Slam tennis tournament of the year to have their proof of vaccination ready for inspection and added, “oh, a ticket would be handy, too!”

The Australian Open begins under mostly cloudy skies with a threat of rain showers.

Nadal is seeking a men's record 21st Grand Slam singles title. He is tied with Djokovic and Roger Federer on 20. Djokovic was a late withdrawal because he's not vaccinated and failed to have his visa cancellation overturned in a Federal Court hearing on Sunday. Federer is still recovering from a knee injury.