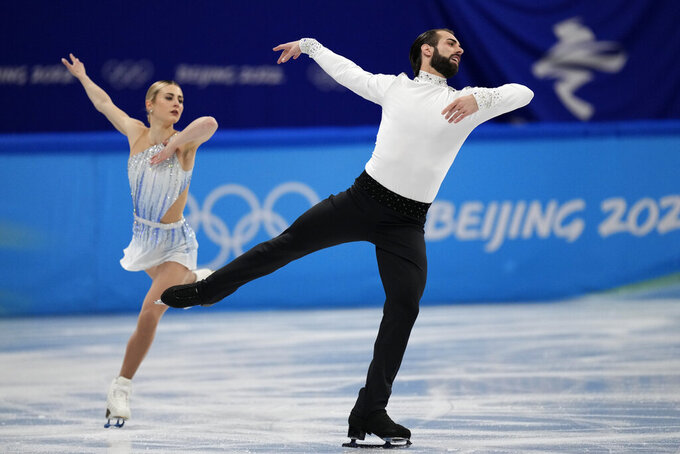 Ashley Cain-Gribble and Timothy Leduc, of the United States, compete in the pairs short program during the figure skating competition at the 2022 Winter Olympics, Friday, Feb. 18, 2022, in Beijing. (AP Photo/Bernat Armangue)

“It was such a joyous moment for us out there today,” LeDuc said.

The 31-year-old LeDuc and pairs partner Ashley Gain-Gribble placed seventh in their Olympic debut. LeDuc wore a white shirt with sparkles and Cain-Gribble an ice blue dress as they performed to music by Ilan Eshkeri in a short program filled with smiles.

When the music ended, Cain-Gribble took a small jump in excitement.

“I think both Ashley and I have had to overcome so many different things, so many times, where people who told us no or we don’t belong,” LeDuc said.

“Hopefully people watching this feel that there is space for them to come into figure skating and for them to be able to celebrate what makes them different,” LeDuc said.

LeDuc — from Cedar Rapids, Iowa — came out as gay at the age of 18 and went public as nonbinary last year. The term is used to describe a person who does not identify as exclusively male or female. The Human Rights Campaign says it can also encompass agender, bigender, genderqueer and gender-fluid.

LeDuc's Olympic debut was hard fought — having just missed making the team for Pyeongchang — especially as their team was nearly derailed by an injury two nights ago.

Cain-Gribble suffered an ankle sprain that affected her right landing foot. She said she was able to recover doing manual therapy with the team doctor.

“It was crazy that we had gone this far — you know, we’ve been here for over two weeks ... it had to happen right before the short,” Cain-Gribble said. “Those things happen, but you just have to learn to move forward.”

That setback showed in their performance when she two-footed the landing on their throw triple lutz. But they also landed their triple loop and received Level 4 grades on every other element.

“To see the people reaching out to both of us really means a lot,” LeDuc said. “It also reminds us that we are one of many, laying the ground for more people to come. I know for me to be openly nonbinary is only possible because amazing, great people before me had laid the groundwork for me.”