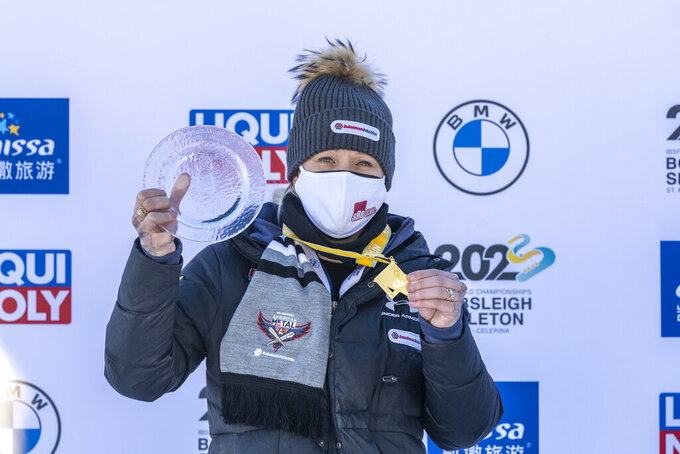 Winner Kaillie Humphries of USA on the podium after the Women's Monobob World Cup in St. Moritz, Switzerland, on Saturday, Jan. 15, 2022. (Mayk Wendt/Keystone via AP)

BEIJING (AP) — This road started in 2014, when Kaillie Humphries and Elana Meyers Taylor started driving four-man bobsleds against men with hopes of getting a second medal event for women added to the Olympic program.

And now, it truly becomes reality for the top American pilots and the other best women’s bobsledders in the world.

The inaugural Olympic monobob event — only one woman in the sled — starts Sunday, with reigning world champion Humphries and this season's monobob World Series overall champion Meyers Taylor expected to be among the top contenders. Medals will be awarded in the new event on Monday and the traditional two-woman competition then starts Friday.

“I hope that more women get into the sport,” Humphries said. “I hope that I can change the direction of the sport. I fought really hard to get women a second medal opportunity, to be the same as men, and I will continue to fight for more opportunity for women in sport. I don’t believe that opportunities should be limited because we’re female. Not everybody thinks that same way.”

She sees the potential. So does Meyers Taylor. They’ve been fighters. They still are.

Each has won three Olympic medals already; Humphries two gold and a bronze in her previous stint driving for Canada, Meyers Taylor two silvers and a bronze for the U.S. Humphries had to fight to get the American citizenship that she needed to compete for the U.S. in the Beijing Games; Meyers Taylor has fought to dispel any notions that a woman who was a world-class athlete, then became a mother, can’t become a world-class athlete again even while dealing with the challenges that come with parenting a special-needs child born with Down Syndrome and profound hearing loss.

And in recent weeks, Humphries and Meyers Taylor both were fighting COVID-19 as well, yet recovered just in time to keep their Olympic hopes going.

“One of the biggest things I’ve learned is just to take things as they come,” Meyers Taylor said. “And as any parent knows, have a lot of patience because things are different day to day. What time I work out changes, what exactly my meal structure looks like changes, I’ve got to make sure he’s taken care of ... this has all been one learning process.”

In a way, the monobob competition represents both victory and defeat for the top U.S. drivers.

They originally wanted four-man to be the second event for women at the Olympics. Male bobsledders have always had two- and four-man events; Humphries and Meyers Taylor wanted the women to have the same opportunity, so they began driving four-man sleds against the men to show what was possible.

Humphries was racing for Canada at the time. Canada wouldn’t have much problem finding three other women to push a sled. Same goes for Meyers Taylor and the American team; there were about a half-dozen women with legitimate chances to make the Beijing Games roster as push athletes and only two wound up being selected. But most other nations in the women’s bobsled world simply do not have the same riches when it comes to depth within the female programs, so international officials began thinking monobob was the better choice for a second Olympic event.

In 2018, it was added to the program to start in Beijing. And here we are.

“I think it’s going to be an interesting competition,” Meyers Taylor said. “Obviously, it wasn’t what me and Kaillie intended when we started this journey. We intended to try and get more women in, to give more medal opportunities to also the female brakemen, too. ... This is something worth fighting for, to continue to fight for greater and greater participation numbers among women.”

Put simply, if monobob existed 20 years ago when women’s bobsledding was first part of the Olympic program, Meyers Taylor and Humphries would almost certainly have more medals in their collections. They’ve been the dominant drivers in the world for years; Humphries won her first gold in 2010 as a driver, the year Meyers Taylor won her first bronze as a push athlete. She switched to the driver spot after those Vancouver Games and has piloted her way to two silvers since.

But they have both said from the beginning the push for a second Olympic event wasn’t about them. It’s about the next generation, about the future, about equality, about growth. Already, the payoffs are obvious — 16 nations will compete in the women’s monobob event, more than any other women’s bobsled race in Olympic history.

Plus, here's another huge win. The medals will be decided around noon Monday in Beijing, which will be late Sunday night in the United States — and just after the Super Bowl on NBC, the network that also holds the Olympic broadcast rights.

Yes, the Super Bowl is essentially the pregame show for women's monobob at the Olympics. It's safe to say that bobsled is about to have more eyeballs on it than ever before.

And it all really started by two women deciding to drive in those four-man races eight years ago, where Meyers Taylor and Humphries — even while often finishing in the very back of the pack — dared to dream that they could make their sport bigger.

“You see certain countries that you’re not used to seeing be able to have access to the sport, which again is changing worldwide the opportunity women have in order to not only seek our sport, but to get to an Olympics and be the best versions of themselves,” Humphries said. “And I think that’s super cool.”