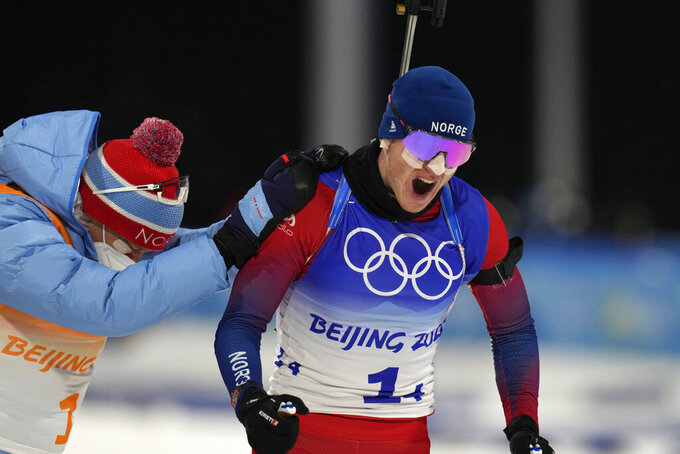 ZHANGJAIKOU, China (AP) — Johannes Thingnes Boe of Norway moved ahead of his French and Russian rivals in the final meters of the mixed relay to take gold Saturday in the first biathlon race of the Beijing Olympics.

Boe, Quentin Fillon Maillet of France and Eduard Latypov of the Russian team left the range close together after the last round of shooting and raced for position until the final stretch, when Boe sprinted for the win in 1 hour, 6 seconds.

“With the 2-kilometer course here, I knew it was going to end up in a sprint and I prepared for this since I came here Monday," Boe said. "I knew what to do and gave my best performance.

"I had already prepared for the last loop in my head 100 times.”

Each biathlete on the two-woman, two-man teams skied a 2-kilometer (1.2-mile) lap, shot prone, skied the lap again and shot standing before returning to the stadium to tag off to the next skier. Each racer was allowed to use up to three extra rounds per shooting bout.

Norway, which came into the relay as the World Cup leader, also saw strong performances from Marte Olsbu Roeiseland and Tarjei Boe. But they trailed early in the race when Tiril Eckhoff struggled on the range, thanks to gusty winds.

“We did a great job, the whole team, and I’m so happy to race with such good teammates," Roeiseland said. “It’s my first Olympic gold, so I’m super happy.”

It was Norway's second Olympic mixed relay gold after winning the race at the 2014 Sochi Games. The only member from that winning team still racing is Eckhoff.

Temperatures hovered around minus-16 degrees C (3.2 degrees F) and a steady wind blasted the skiers as they worked their way around the course. Racers covered their faces with tape to protect against wind chill that reached minus-30 C (minus-22 F).

France was the defending champion but settled for silver. Fillon Maillet was joined on the French team by Emilien Jacquelin, Julia Simon and Anais Chevalier-Bouchet, who said the windy conditions made the race challenging.

“It is a good finish for us, but the wind is hard to manage,” she said. "I have to enjoy it because it is a silver medal, but I am not very proud of my leg. But we are a team and when someone is not very good, the others are better.”

Jacquelin said they tried to stay focused on the job.

“That’s biathlon — biathlon with wind is crazy," he said. "We knew that it’s all possible. Maybe I have to keep that in my head, too, for the next races; it never ends, it’s never finished. It will be like that throughout the Olympics.”

The Russian team of Latypov, Uliana Nigmatullina, Kristina Reztsova and Alexander Loginov was leading after the last hand-off, but everything tightened up on the last lap.

Sweden, Germany and Belarus followed the front three to the line while the United States came in seventh, the team's best-ever mixed relay result at the Olympics.