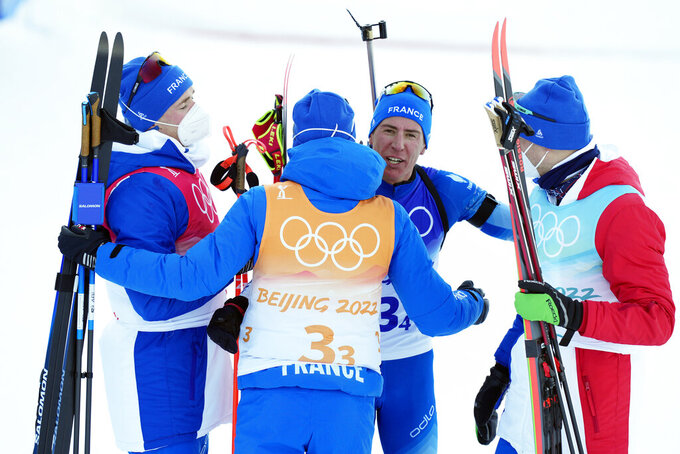 ZHANGJIAKOU, China (AP) — The Russians took the lead right at the start of the Olympic four-man biathlon relay Tuesday and stayed well out front until a shooting meltdown at the very end allowed Norway to get a glimpse of gold.

Eduard Latypov arrived at the range all alone but missed four of the five targets. He used all three of his spare rounds and still had to ski two penalty loops as France, Norway and Germany closed in.

Norwegian anchor Vetle Sjaastad Christiansen hit all five of his targets and left the range first. He took off for the finish line and crossed first, helping the Boe brothers to win another Olympic gold medal.

“It was such high pressure,” Christiansen said. “It was the perfect race for me. I was completely blacked out or I don’t remember anything, but I woke up and we’d won the gold medal.”

The Norwegians won the race in 1 hour, 19 minutes, 50.2 seconds, giving Johannes Thingnes Boe his third gold medal and fourth overall at the Beijing Games. Tarjei Boe won his second gold to go along with a silver and a bronze.

France's final skier, Quentin Fillon Maillet, missed twice and needed two spares before leaving the range in second place. He finished 27.4 seconds behind Norway for silver. The Russians earned bronze, 45.3 seconds behind the winners and just ahead of Germany.

The silver was Fillon Maillet's fifth medal of the Beijing Olympics. He had already won two gold and two silver.

“I’m just really happy to share this moment with my team," Fillon Maillet said, adding that his latest medal was unlike the others. "It’s different because we share all of this with the team, the physio, the coach, the technician and everyone else. It’s very good because it’s a gift for everyone.”

The relay race had been scheduled to start at 5 p.m. but was moved up 2 1/2 hours because of frigid temperatures at the stadium. The cold was expected to drop to minus 20 degrees C (minus 4 degrees F) by 6 p.m., making it dangerous for the athletes to compete.

Strula Holm Laegreid skied the first leg for Norway but some missed shots set the team back and handed the Russians the lead.

“I was quite far down after my leg,” Laegreid said. “I got a penalty loop in the standing and I have never done that before in the relay so I was very disappointed with myself.”

Laegreid handed off to Tarjei Boe, who then made way for his brother as the Norwegians slowly moved to the front group.

“I did OK. Not my best race here, but still OK in tough wind conditions," Tarjei Boe said. "These two bad boys after me were just incredible. It’s a team event and it’s team work. It didn’t look so good after 50% of the race, but anything was possible at that point.”

Norway has won two of the three men’s relay events in the World Cup this season.

“We’ve won many relays in the World Cup before this Olympic relay, and we really wanted to win today as well," Johannes Thingnes Boe said.

Latypov crossed the line and crumbled to the ground. His teammates came to comfort him.

“I tried at first to wait, but I understood that I have to work faster,” Latypov said. “There was this gust of wind and my feeling was not so good, the concentration was not what I wanted it to be. That with the gusts of winds made me make the misses."

Philipp Nawrath of Germany had also struggled on the last shooting, using all three spares and still needing to ski a penalty loop. The team finished 1:04.3 behind.