Olympics carry a question: What does it mean to be Japanese? 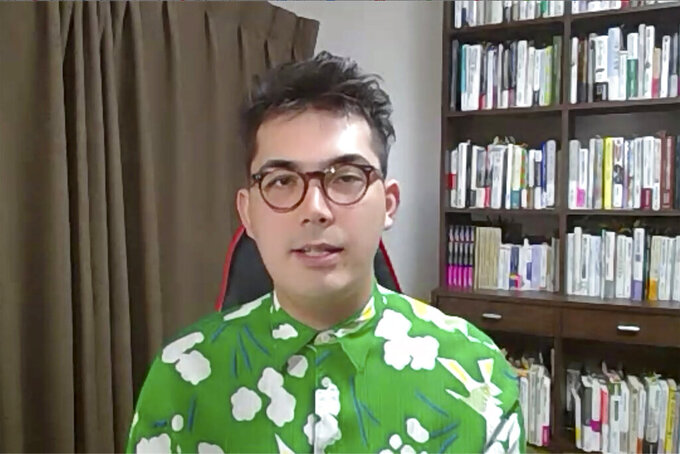 In this image made from video, Julian Keane, sociologist at the Urban-Culture Research Center of Osaka City University, speaks during a video interview from Osaka, western Japan, on July 27, 2021. The racial diversity Japan showcased at the Olympic opening ceremony also highlights its lack in Japanese society. The population of people with multiracial and cultural backgrounds continues to rise through more international marriages and an influx of foreign workers, but tolerance to diversity still lags in a country that values homogeneity and conformity. (AP Photo)

TOKYO (AP) — Two multiracial athletes, two high-profile roles: Rising NBA star Rui Hachimura carried the Japanese flag at the Olympics' opening ceremony. Tennis superstar Naomi Osaka lit the Olympic cauldron. For Japan, it was a remarkable showcase of racial diversity — but one that also highlighted how much remains missing in a nation that values homogeneity and conformity.

Osaka and Hachimura, both of whom have one foreign parent and one Japanese parent, were cheered warmly by many even as some nationalists pounded them online for not being “pure Japanese.” It has rekindled a debate on racial identity that points toward a particular and thorny question: What does it mean to be Japanese?

Osaka and Hachimura have many fans here. Both appear in commercials for Nissin Cup Noodle. Osaka recently signed with Panasonic, and Hachimura, a Washington Wizards forward, appears in ads for a Taisho Pharmaceutical energy drink and for Sumitomo Mitsui Banking Corp.

Their success coincides with an increase in the number of people with multiracial and diverse cultural backgrounds in Japan that comes as more people marry foreigners and more foreign workers arrive.

Tolerance to diversity, however, still lags.

Children from mixed race families in Japan, often called “hafu,” or half, account for about 2% of babies born every year. They are often chided for not being “fully Japanese” or bullied for looking different.

Melissa Luna Isomoto, who is of Japanese and Kenyan descent and grew up in Japan, was delighted to see her role model, Osaka, represent Japan as the torch bearer in the July 23 event. But she said her heart sank when she saw online comments criticizing Osaka for not being Japanese enough.

“Those slandering Naomi-san also hurt me and others of mixed-race roots,” Isomoto said in a recent interview in Japanese from her home in Yokohama. “It was so painful I tried not to read them.”

“She hardly speaks Japanese, and she is not pure Japanese,” one Twitter posting said. “No way. We wanted pure Japanese, or as a compromise, at least a Japanese-speaking ‘hafu (half-Japanese)’ like Rui Hachimura,” another tweet said.

Attacks escalated after Osaka's surprise third-round loss to Marketa Vondrousova of the Czech Republic four days later, and some people even celebrated her defeat.

Many critics posting online suggest they define “Japanese” as those whose parents are both Japanese and speak the language perfectly. Many consider those born and raised in Japan, such as Hachimura, as Japanese, but think of Osaka, who grew up mostly in the United States and doesn’t speak fluent Japanese, as more Japanese-American.

There were also complaints about Osaka's support of the Black Lives Matter anti-racism movement and her comments about mental health. In addition to her Haitian roots, Osaka tends to be an easy target in Japan, where experts say biases against women and mental health issues persist.

Growing up with African roots, Isomoto was repeatedly reminded that she looked different.

“I was often called a foreigner, or told to go back to Kenya as other kids knew my Kenyan roots, and sometimes called a gorilla,” she said. “Because of bullying and racism, I often disliked my own roots and wished I was Japanese."

She gained confidence and started learning more about her African background when she met other students of multiracial or different cultural backgrounds in high school. Still, pressure to conform was so strong she got her hair straightened like other Japanese students, trying to blend in.

Japan’s lack of tolerance also affects sexual minorities and ethnic Koreans and Chinese, who are not bullied for their physical features but are discriminated against for historical and political reasons, said Julian Keane, an Osaka City University sociologist.

“Naomi Osaka's torch highlighted the use of diversity only when it is convenient for Japan and brings benefits," Keane said. Multiracial people are seen as “human resources” and considered Japanese only when they achieve results without interfering with the privileges of the “majority," he said.

For example, Japan has eased its immigration policy to allow more unskilled foreign workers to make up for a declining workforce in the world's fastest aging country — but on the condition that they come without their families and leave after their contracts end.

The term “pure Japanese” is often used to promote unity and national identity, and to target and exclude others. There is a growing presence of mixed-race people in entertainment and sports, where their roles are expected and they are marketed for their looks and physical performance.

Japan’s 580-plus-person Olympic team has at least 30 mixed-race athletes, including Abdul Hakim Sani Brown, a sprinter born in Tokyo who is the son of a Japanese mother and a Ghanaian father, and Olympic judo gold medalist Aaron Wolf, an American Japanese born and raised in Tokyo.

There are also diverse stars from the past: home run king Sadaharu Oh, a Chinese citizen who grew up in Japan, for example, and baseball star Sachio Kinugasa, born to a Japanese mother and an African-American soldier, were largely accepted as Japanese and both received the government's prestigious People's Honor Award. Kinugasa, who was bullied for his mixed race as a child, died in 2018. Oh participated in the Olympic torch relay last month at the Games' opening ceremony.

Still, in a country where conformity and homogeneity have been emphasized, life can often be difficult.

In May, Hachimura's younger brother Allen, who also plays basketball on a college team, cited a recent slander, saying on Twitter: “People say there is no racism in Japan, but some people make racist comments like this. I don't think the revelation can make a difference, but I just wanted you to be interested in the problem of racism.”

Hachimura responded: “Messages like this come almost every day.”

Isomoto says she is now confident about her mixed roots, and about who she is. Like Osaka, her role model, she hopes to help others who still suffer.

“If asked if I’m Japanese or Kenyan, I choose neither. I was born and grew up in Japan and am bicultural. I cannot choose one or the other,” Isomoto said. “I’d say, `I’m just me.'”