Olympics return to antiquity at the 2004 Athens Games 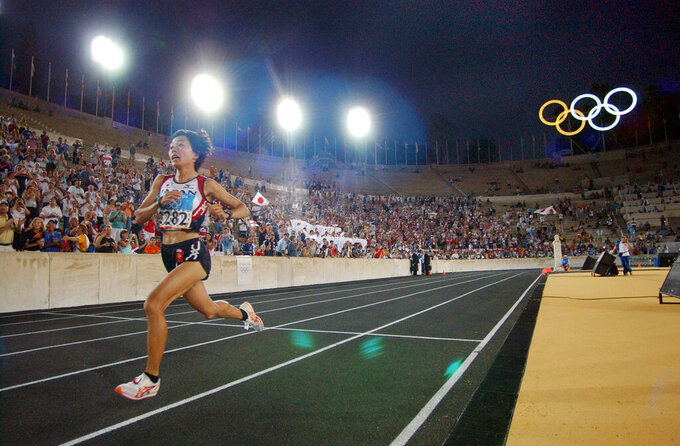 FILE - In this Aug. 22, 2004, file photo, Japan's Mizuki Noguchi takes the final lap inside the Panathinaiko Stadium as she wins the gold medal in the women's marathon in the 2004 Olympic Games in Athens. (AP Photo/Richard Drew, File) 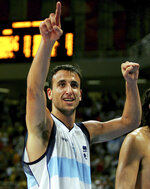 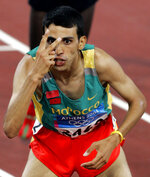 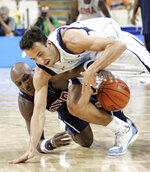 The men's and women's marathon races started in the actual town of Marathon, near the ancient battlefield about 26 miles northeast of the capital on the Aegean coast. They finished in central Athens at the Panathenian Stadium, the marble venue used for the opening and closing ceremonies of the inaugural 1896 Games.

The shot put events were even farther away, taking place in Ancient Olympia, about 120 miles southwest of Athens. Irina Korzhanenko of Russia became the first woman to win a gold medal at the ancient site that birthed the Olympics. Yuri Bilonoh of Ukraine won the men's event.

Both were soon stripped of their Olympic titles for doping, but the splendor of the venue was not in doubt.

“Everybody else has to go to that big, shiny stadium in Athens. We get to do it where it all started,” American thrower John Godina said after qualifying. “I took a lot of classic classes in college. I’ve learned a lot about the whole Olympic movement in ancient Greece. I realize it’s been 1,500 years since anybody has gotten to compete in this stadium."

Back in Athens, the United States won the most medals, but they didn't win the men's basketball tournament for the first time since professional players were allowed into the games in 1992. The gold medal instead went to Argentina, a team led by Manu Ginobili.

On the eve of the opening ceremony, the host country was delivered a blow when its two top sprinters, Kostas Kenteris and Ekaterina Thanou, were apparently injured in a motorcycle crash. Kenteris won the 200-meter gold medal at the 2000 Sydney Olympics and Thanou earned silver in the 100 that same year, making them favorites to win at their home games. The pair was soon accused of faking the crash to avoid doping tests. Neither competed at the games.

Usain Bolt competed at the Olympics for the first time, without winning any medals. The Jamaican sprinter ran in the 200 meters but didn't make it out of the first round. There was much more to come from him in the next three games, however.

Hicham El Guerrouj won a double on the track, while keeping Kenenisa Bekele from doing the same. The Moroccan runner became the first man to win the 1,500-5,000 double since Paavo Nurmi in 1924. Bekele won the 10,000 meters, but ended up second to El Guerrouj in the 5,000. In the women's competition, Kelly Holmes of Britain also pulled off a double, winning the 800 and 1,500. In other track events, Liu Xiang became the first Chinese man to win an Olympic gold medal in the sport when he won the 110-meter hurdles, and Felix Sanchez did the same for the Dominican Republic in the 400 hurdles.

German kayaker Birgit Fischer set an incredible record of consistency in Athens, becoming the first person in any sport to win two medals in five different Olympics. Fischer started her Olympic career at the 1980 Moscow Games while competing for East Germany. After missing the boycotted 1984 Los Angeles Games, she won at least two medals in Seoul, Barcelona, Atlanta and Sydney before doing the same in Athens.