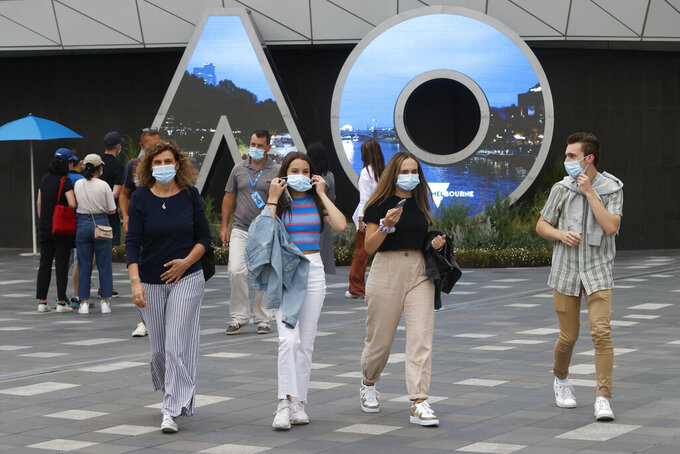 MELBOURNE, Australia (AP) — The first test of Naomi Osaka’s new approach to tennis might have been when she completely whiffed an overhead to give her opponent a break point on Day 1 of the no-Novak-Djokovic Australian Open.

Osaka didn’t chuck her racket. She didn’t roll her eyes. She smiled.

“There are situations where I previously would get upset. But at this point in my life, like, I’m here because I want to be here and because I find that it’s fun for me,” Osaka said. “Might as well enjoy it while I still can.”

In Osaka’s mind, the drama involving nine-time champion Djokovic’s deportation on the eve of the Australian Open was something for the players in the men’s draw to worry about. Her title defense began smoothly enough: She won the first five games on the way to a 6-3, 6-3 victory over Camila Osorio on the main court.

With so much attention on the 11-day saga of Djokovic’s attempt to participate in the year’s first Grand Slam tournament, and bid for a fourth consecutive title at Melbourne Park, the returns of Osaka and Rafael Nadal have been overshadowed.

Osaka wasn’t bothered by that. Nadal didn’t seem to be put off by it, either, renewing his bid for a record 21st Grand Slam singles title with a 6-1, 6-4, 6-2 win over Marcos Giron.

Nadal is tied with Djokovic and Roger Federer with 20 major singles titles each, the most in the history of men’s tennis. With Djokovic unable to defend his crown in Melbourne because he didn’t meet Australia’s strict COVID-19 vaccination criteria, the door is slightly more ajar to Nadal.

Osaka’s main concern, meanwhile, is winning a fifth major title, and her third at the Australian Open.

“To be completely honest, it didn’t really affect me,” Osaka said about what went on with Djokovic. “My goal, like even before this whole situation, is to just focus on myself more, what I need to do to become better.

“Me, I’m a tennis player. I’ll focus on my matches. You as, I guess, an audience, focus on whatever is in the news, no?”

A potential fourth-round meeting with top-ranked Ash Barty could be waiting. Barty, aiming to be the first Australian woman to win the title here since 1978, started with a 6-0, 6-1 win over Lesia Tsurenko.

After winning here last year, capturing her second Australian Open title in three years, Osaka pulled out of the 2021 French Open before the second round, then sat out Wimbledon. She played at the Tokyo Olympics, where she lit the cauldron, but ended her 2021 season early after a third-round loss and a teary news conference at the U.S. Open.

Two of her goals for 2022, she said last week, were to stay completely composed on the court and off, and to enjoy the game.

And, yes, finally, the focus was on tennis in Australia. And it got started in a big way, with a combined 64 matches scheduled on Day 1 in the men’s and women’s singles.

Also advancing were No. 7 Matteo Berrettini, No. 10 Hubert Hurkacz, No. 16 Cristian Garin and No. 17 Gael Monfils and No. 23 Reilly Opelka, while No. 12 Cameron Norrie lost in straight sets to Sebastian Korda.

Nadal won the Australian Open in 2009 and is the only past champion in the men’s bracket after Djokovic’s late withdrawal Sunday. On Monday, the top-ranked Serbian landed in Dubai, then caught a flight to Belgrade.

Monday was Nadal’s first appearance at a major since he lost to Djokovic in the semifinals of the French Open. He missed Wimbledon because of fatigue, skipped the U.S. Open with a painful left foot and, after recovering from COVID-19, started 2022 with a title in a tuneup tournament in Melbourne.

“Honestly, it’s been very tough moments and there are still doubts,” Nadal said. “But here I am and I can’t be happier to be back in this amazing stadium. It’s fantastic.”

The 35-year-old Spaniard said Djokovic's absence would have an impact on the tournament.

“In a personal level, yes, I would like to see him playing here,” Nadal said. “If it is fair or not that he’s playing here is another discussion that I don’t want to talk anymore.”

Salvatore Caruso, who lost in qualifying but became the so-called lucky loser to fill the late vacancy in the draw, lost 6-4, 6-2, 6-1 to Kecmanovic.

It began when he was granted an exemption to strict vaccination rules by two medical panels and Tennis Australia in order to play in the tournament.

That exemption, based on evidence that he recently recovered from COVID-19, apparently allowed him to receive a visa to enter Australia. But upon arrival, border officials said the exemption was not valid and moved to deport him.

Showing evidence of vaccination is a requirement for anyone — players, coaches, fans, others — entering Melbourne Park for the tournament.

A security official with a loudspeaker reminded people lining up outside the complex early Monday to have proof of vaccination ready for inspection and added: “Oh, a ticket would be handy, too!”