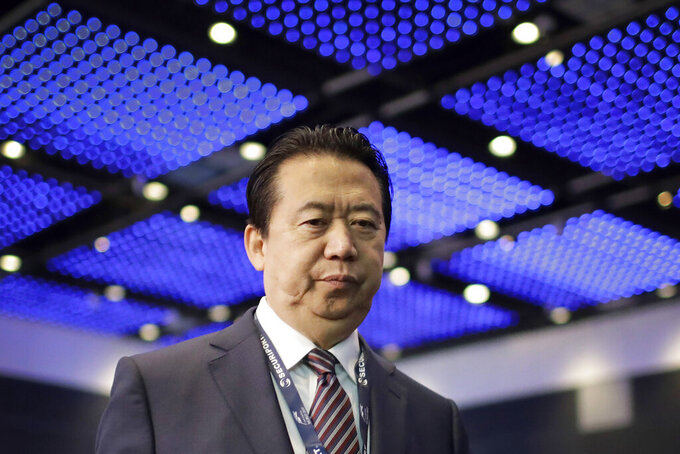 BEIJING (AP) — The drama surrounding Peng Shuai is following a familiar script, in which someone who has run afoul of China's Communist government disappears from view.

What happens next depends on the case, but it is not uncommon for the person in question to disavow the statements or actions that first upset officials. Other times, the person simply keeps a lower profile. Sometimes, their arrest is eventually announced.

Peng's saga began in November, when she wrote in a social media post that a former member of the party’s all-powerful Politburo Standing Committee had forced her to have sex three years ago despite repeated refusals. Her post also said they had sex once seven years ago, and she had feelings for him after that.

The post was quickly taken down and the former top-ranked doubles player dropped out of public view late last year.

After she reappeared weeks later, she denied to a Singapore newspaper that she ever made any accusation of sexual assault. I n an interview published Monday by a French sports paper, the tennis player called the whole situation an “enormous misunderstanding.”

Here's a look at a some other people who have disappeared over the years — a phenomenon that has expanded since President Xi Jinping came to power in 2013:

Among the most high-profile recent disappearances was that of Ma, the founder of Alibaba Group, the world’s biggest e-commerce company.

Ma, China’s most prominent entrepreneur, stopped appearing in public after he criticized regulators as being too conservative in an October 2020 speech.

Rumors on social media questioned whether Ma had been detained. Friends of Ma reportedly said he wasn’t in custody but decided to stay quiet following criticism of his comments. The normally voluble Ma reappeared two months later, in a brief video in January 2021 that made no mention of his absence.

Since then, sightings of Ma, who is officially retired, have been rare. His whereabouts and legal status remain shrouded in mystery.

Fan is one of China's biggest — and biggest-grossing — movie stars. Her star was riding high when she disappeared for about four months in 2018: Her Weibo social media account fell silent, and her management office in Beijing was vacated.

When she finally resurfaced, it was to apologize for tax evasion.

State news agency Xinhua reported that Fan and the companies she represents had been ordered to pay taxes and penalties totaling 900 million yuan ($130 million).

Fan, who had roles in “Iron Man 3” and “X-Men: Days of Future Past,” has managed to revive her film career, to a degree, with roles in international productions. While her case was not overtly political, it came amid a sweeping campaign against corruption waged by Chinese leader Xi Jinping.

Meng, a vice minister of public security and head of Interpol, the France-based organization that facilitates police cooperation across borders, went missing for weeks in 2018.

Chinese authorities soon announced he was being investigated for taking bribes and other crimes. That signaled he was the latest high-ranking Chinese official caught in Xi's anti-corruption campaign — a measure that made the Chinese leader popular but has also been criticized as cover for eliminating political rivals.

Meng was eventually tried and remains imprisoned. His wife Grace Meng has long maintained that the accusations were trumped up and that he was purged because he’d been using his high-profile position to push for change.

Liu, a dissident writer who joined calls for increased freedoms in China in 2008, was detained a day before the appeal for reforms was released. After his arrest, his whereabouts were unknown for a time.

He was eventually accused of subversion and sentenced to 11 years in prison. He was awarded the Nobel Peace Prize and died of cancer before he was ever released. Liu had long been a critic of of China's government and had previously spent time in jail for joining the 1989 student-led protests in Tiananmen Square that were crushed in a military crackdown.

WHAT OTHER KINDS OF PEOPLE DISAPPEAR?

Most notably in recent years, large numbers of Uyghurs and members of other predominantly Muslim minority groups have disappeared as part of what the government calls a campaign against extremism, separatism and terrorism.

China has also grabbed some foreigners.

China delayed announcing their detentions for days, then denied that the arrests were linked while insisting at the same time that Meng be set free. The two were released in September after Meng, no relation to the Interpol chief, was allowed to return to China in what was essentially a high-level prisoner swap.