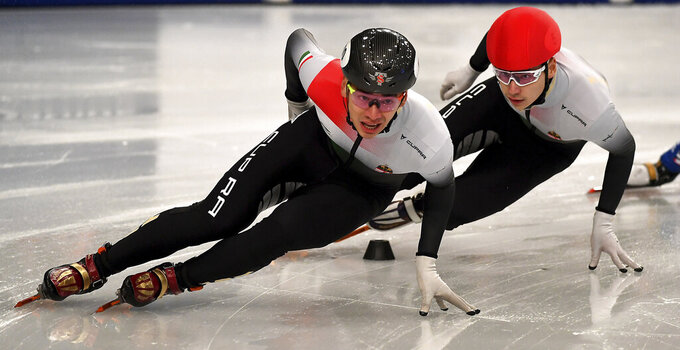 FILE - Sandor Liu Shaolin, left, of Hungary, leads his brother Liu Shaoang to win in men's 1,000 meter final of the ISU European Short Track Speed Skating Championships in Debrecen, Hungary, on Jan. 26, 2020. Born to a Chinese father and Hungarian mother, Liu Shaolin of Hungary is a contender in the 500 meter race at the Winter Olympics. (Tibor Illyes/MTI via AP)

Short track speedskating is already thrilling with its high-speed crashes and elbows flying. Now, there’s a new event adding to the chaos with its Olympic debut in Beijing.

Explosive starts and maximum speed will be on display. There’s no obvious leader in a mixed relay, which makes it even more unpredictable.

Asia is a hotbed for short track and although the arena seats 17,000, there won’t be the usual raucous atmosphere because of COVID-19 restrictions.

China is ranked No. 1 in the world and set the world record at a test event in Beijing in October, making the Chinese the gold-medal favorite on home ice. The Netherlands, Hungary and the Russian Olympic Committee are in medals mix, too.

On the men’s side, China, South Korea and Canada have strong medal contenders in the 500, 1,000 and 1,500. Ren Ziwei of China could make the podium in the 500 and 1,500. Sjinkie Knegt of the Netherlands returns for his fourth Olympics at age 32 with a shot to medal in the 1,500. Born to a Chinese father and Hungarian mother, Liu Shaolin of Hungary is a contender in the 500. In the women’s events, eight-time Olympic medalist Arianna Fontana of Italy is the defending champion in the 500. She’s tied with Apolo Ohno and Viktor Ahn for most Olympic short track medals. Suzanne Schulting is a rare Dutch short tracker; most skaters in her country are known for their success in long track. She will be a favorite in the 500 and 1,500. Kim Boutin and Courtney Sarault are Canada’s top skaters. China’s Fan Kexin owns 14 medals from world championships, but has just one Olympic medal from Sochi in 2014. She’ll try to add to that in the 500.

Canada, South Korea, Hungary, China and Italy are contenders in the men’s 5,000 relay. The Dutch, South Korea, Canada and China have the strongest chances in the women’s 3,000 relay.

It’s been 12 years since Ohno skated in the last of his three games, becoming the most decorated American Winter Olympian with eight career medals.

While his legacy burns bright, the U.S. is a long shot at these games.

Kristen Santos is the lone American skater ranked in the world’s top 10 in any event. She represents the best chance for the women to win their first medal since 2010, ranking second in the world in the 1,000 and fourth in the 1,500.

The only returning Olympian is Maame Biney, born in Ghana and raised in Virginia. Four years ago, she became the first Black woman to make the U.S. short track Olympic team. She finished 14th in the 500 and 31st in the 1,500 in Pyeongchang.

The U.S. men have won at least one medal at the last five Olympics, but failed to qualify a relay team for the first time since 1992. As a result, only two men — Ryan Pivirotto and Andrew Heo — will compete in Beijing, the smallest U.S. contingent since 1992, when the sport made its debut in Albertville.

Capital Indoor Stadium hosts short track and figure skating. It was built in 1968 as the first artificial indoor ice rink in China. It hosted the “ping-pong diplomacy” matches between the U.S. and China in 1971, an event that paved the way for U.S. President Richard Nixon to visit Beijing the following year. Volleyball was played there during the 2008 Olympics.