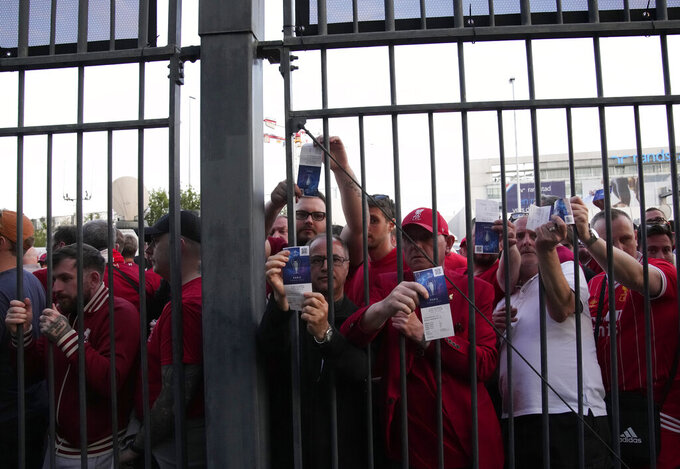 FILE - Liverpool fans wait in front of the of the Stade de France prior the Champions League final soccer match between Liverpool and Real Madrid, in Saint Denis near Paris, Saturday, May 28, 2022. A French Senate commission is releasing its initial conclusions Thursday JUNE 16, 2022 in an investigation into chaos that engulfed the Champions League final last month outside France's national stadium, including police firing pepper spray at fans and families. (AP Photo/Christophe Ena, File)

French senators said the chaos outside the national stadium that marred the Champions League soccer final was due to a series of mistakes by police and officials — and not the actions of previously blamed Liverpool fans — with “malfunction at every stage” before, during and after the game.

The senators made a series of recommendations to fix problems ahead of the Rugby World Cup next year and the 2024 Olympics that France will host. The findings of a report into the May 28 final were released Wednesday after the fiasco drew worldwide attention to heavy-handed policing and raised questions about how France manages security at big events.

Laurent Lafon, the head of one of the Senate commissions involved in the fact-finding mission, urged French authorities to draw lessons from the multiple incidents.

“The seriousness of what happened at the Stade de France shows that there are still many adjustments to be made, and many decisions to be taken to ensure that these incidents do not happen again," Lafon said.

He had no doubt that France is capable of organizing major events in the future but said assurances should be given at the highest level, including French President Emmanuel Macron, about the country's determination to prevent any repeat.

Since the final, where kickoff was delayed by more than 30 minutes, French senators have quizzed supporters and officials. Introducing their findings, Lafon blamed a general lack of coordination and authority, saying there was “malfunction at every stage" of the final.

UEFA has also started gathering evidence about issues that marred one of the world’s biggest games in sports. Real Madrid went on to beat Liverpool 1-0 in the final.

Lafon also apologized to Liverpool and Real Madrid fans, saying they were victims and not responsible for the events as French authorities had initially suggested.

France's interior minister, Gerald Darmanin, initially maintained that the presence of up to 40,000 supporters — allegedly mainly Liverpool fans — without tickets or with forged tickets led to the incidents that marred the event. But only 2,471 forged tickets were identified at the Stade de France.

Darmanin also said that dispersing the crowd that had amassed near the stadium’s fences with tear gas was the only way to prevent people getting crushed.

Many supporters also complained about thefts and assaults after the match as they left the stadium.

Francois-Noel Buffet, the president of the Senate’s law commission, said fans' security was not sufficiently ensured, noting that police forces struggled to put an end to the petty crime that took place around the stadium,

He said this should have been foreseen and better handled.

“The number of people mobilized to fight against delinquency was therefore undersized," he said.

Senators also criticized the decision by the police prefecture to set up a pre-filtering system of fans designed to prevent terror attacks in combination with ticket checks by stewards. Buffet said this had unintentionally created a bottleneck, and should not be repeated in the future.

Senators regretted the automatic deletion of CCTV footage of events outside the Stade de France since judicial officials did not request the seizure of the footage within seven days after the incidents.

Buffet recommended that keeping such video for 30 days would become mandatory.

“What we will miss forever are the images. The real regret is there," said Buffet.

Senators also pointed to the poor handling of fans, and where they tried to enter the stadium, as a consequence of a transport strike. Stewards needed better training in future, with improved coordination with police forces.

The Paris police chief, Didier Lallement, has previously justified the pepper spraying of fans, many with families, amid the chaos. Lafon said Lallement had a clear responsibility in the failure, and Buffet recommended more clarity over when the use of tear gas was justified.