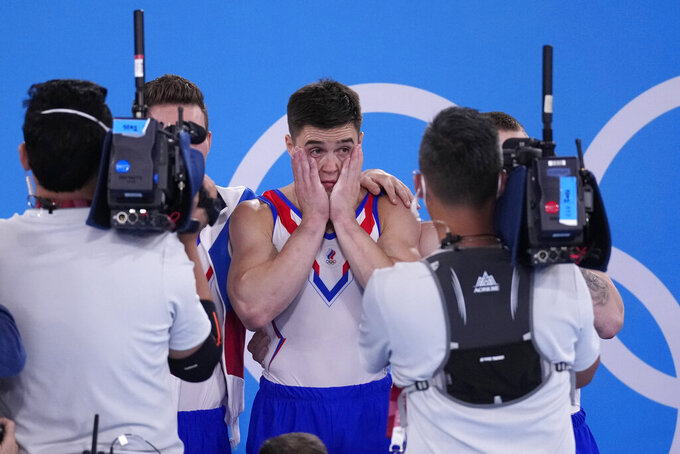 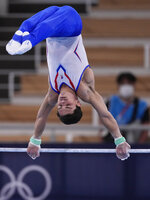 TOKYO (AP) — Nikita Nagornyy huddled with the rest of the Russian men's gymnastics team, stared at the scoreboard and waited.

What in reality was only a few moments seemed like forever to the group representing the Russian Olympic Committee.

For a quarter-century, the Russians had ceded the top of the medal stand at the Olympics to rivals. Japan. China. The United States.

When the score for Nagornyy's floor routine finally flashed — 14.600, just enough to slide past Japan and into first — the reigning world champion erupted in joy, tears and gleeful shouts of his country's name.

“Everyone here deserves this medal,” Nagornyy said. “I knew we’d win all along and we just confirmed it.”

Russia's team total of 262.500 was just ahead of Japan's 262.397 and China's 261.8934. The Russians took the lead after the third rotation, though their grasp on gold appeared tenuous when Abliazin stepped out of bounds on floor exercise. Dalaloyan, competing on a heavily taped left Achilles tendon just three months removed from surgery, bounded out of bounds too.

Rising Japanese star Daiki Hashimoto drilled a 15.1 on high bar to slip by China into first. Russia's hopes of gold fell to Nagornyy, who was born just five months before the 1996 Olympic team triumphed in Atlanta. An early wobble forced him to scrub his initial routine. He improvised brilliantly, avenging a loss to Japan in Brazil five years ago.

“At the Olympics in Rio, we were weaker than the Japanese,” said Abliazin, who was on the 2016 team alongside Nagornyy and Belyavskiy. “Now we are already stronger. We proved it at the world championships (in 2019) and proved it again.”

The fact the Russian flag and the country's national anthem weren’t part of the ceremony — part of the International Olympic Committee's penalty for doping problems in the country — hardly mattered. It didn't change the way the gold felt hanging around their necks. Or the validation the performance provided for a team that is now the best in the world.

“To beat Japan at their home is a great result,” Abliazin said. “I think we can do even more.”

They just might if they can get healthy. Two days after sobbing at the end of qualifying, Dalaloyan pushed aside the ache in his leg and was perhaps even better. He stuck the dismount on his vault, his feet seemingly suction-cupped to the mat.

Even though the momentum from a tumbling pass during his floor routine carried him onto the blue carpet, he recovered to post a 14.066, vital during a meet where every hundredth of a point counted.

“The emotions covered all the pain I felt,” Dalaloyan said. “So I feel fantastic. The emotions of the victory and the medal are great. We started calmly, but there were nerves at the end. It became very passionate.”

The passion could be felt in the roar of the Japanese after the 19-year-old Hashimoto — Japan's heir apparent to two-time Olympic champion Kohei Uchimura — delivered a nervy high bar set. Their cheers echoed throughout the mostly empty Ariake Gymnastics Centre, and for a few minutes, it appeared it might be enough to overcome both the Chinese and the Russians.

Hashimoto didn't let himself go quite that far.

“I knew I wasn't performing by myself,” he said. “I wanted to do it for everyone else. I'm exhilarated. I was very happy when I was done. I didn't even consider the color of the medal. I just knew I had delivered.”

Silver, but not quite gold. While admitting a tinge of disappointment in the final result, Hashimoto was quick to point out the Japanese didn't lose so much as the Russians won. Other opportunities, however, likely await for a team whose members are all 25 or younger.

“Come Paris, we are set on going for gold,” Tanigawa said.

It figures to be tight all the way through. Japan captured gold in Rio de Janeiro in 2016. The Chinese edged Russia for a world title in 2018, then flipped positions a year later. The margins have been razor thin all the way. That's not likely to change.

Great Britain came in fourth. The U.S. appeared poised to come in fourth before a messy floor exercise in the final rotation, the only real mistake in an otherwise solid meet for the Americans in three-time Olympian Sam Mikulak's final meet before retiring.

“Throughout this whole experience these guys were rock solid,” Mikulak said of teammates Shane Wiskus, Yul Moldauer and Brody Malone. “Just really cool to see these first-timers go out and shine like that. We really have a strong future for Team USA.”