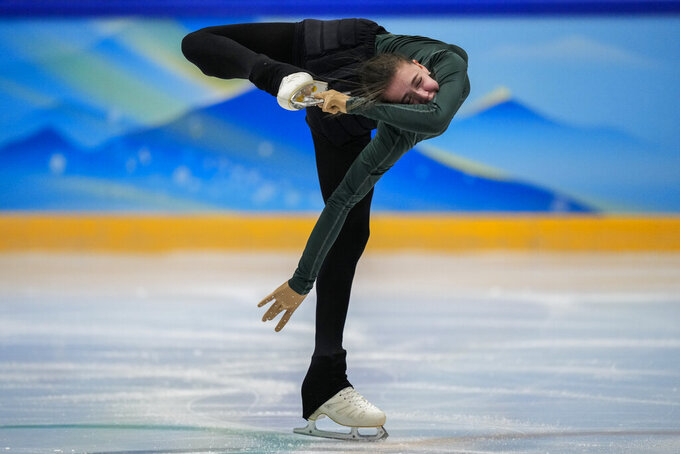 BEIJING (AP) — The coach behind Russia's figure skating dynasty rarely speaks to the media, enhancing her mystique as a guru who produces a line of teenage stars who can land jumps no other women even attempt.

A doping furor around her star pupil has forced Eteri Tutberidze into the spotlight at the Beijing Olympics. She broke her silence on the case against Kamila Valieva on Saturday, telling Russian TV: “We are absolutely sure that Kamila is innocent and clean.”

Tutberidze-trained skaters have dominated competition for eight years, but critics have raised concerns about their short careers - many retire as teenagers - and propensity to suffer serious injuries.

The news that 15-year-old Valieva tested positive for a banned heart medication before the Olympics puts Russia's gold medal in the team event in jeopardy and could kick her out of the women's competition next week.

The positive drug test has been the top story out of the Olympics for days, pitting Russia against world sporting agencies again. Tutberidze and Valieva shared an emotional hug Saturday near the end of practice.

Valieva made her senior debut just five months ago, but she's already acclaimed as a generational talent. She combines spectacular jumping power — landing the first quadruple jump by a woman in Olympic history on Monday — with elegant skills to shatter world-record scores.

When an athlete under 16 — a “protected person” in Olympic jargon — tests positive, the rules say their entourage must be investigated. That means the Russian anti-doping agency is launching an examination of Tutberidze's world-beating, secretive training group in Moscow.

“On one hand, they are professional athletes, and they are competing at high level competitions as other adults (do) and should be ready to bear all their responsibility,” Margarita Pakhnotskaya, former deputy CEO of the Russian anti-doping agency, told The Associated Press.

“But on the other hand, we know that psychologically and mentally, they are not adults. And partly this responsibility should be shared with the senior people who are in their nearest circle.”

Tutberidze's approach to training focuses on athleticism and a fearsome work ethic. She had to work to build a coaching career from a low point as a penniless skater performing in U.S. ice shows in the 1990s. She was stuck in Oklahoma living in a YMCA when she survived the 1995 bombing of the federal building in Oklahoma City.

One person in Tutberidze's orbit who could face questions is sports doctor Filipp Shvetsky, who accompanied Valieva to her first senior international competition in October. The doctor has said he was barred from working with Russia's rowing team after a 2007 doping investigation.

In less than a decade, Tutberidze has gone from being one of many Russian skating coaches to the leader of a dynasty.

Her breakthrough came when Yulia Lipnitskaya helped Russia win the team event gold in Sochi in 2014, becoming the second-youngest gold medalist in the history of the sport.

Four years later, Tutberidze had the top two women, with Alina Zagitova beating Evgenia Medvedeva for the gold. In Beijing, Tutberidze coaches all three Russian women, who could sweep the podium with their high-scoring quad jumps.

Tutberidze can select the most promising young Russian skaters for her camp, which has enviable facilities and funding. At the national championships where Valieva tested positive in December, a Tutberidze skater won for the seventh year in a a row.

Stars trained by Tutberidze have not had long careers.

Defending Olympic champion Zagitova took a break in December 2019 at 17, saying she needed to find motivation after losing to younger Russians with quad jumps. She hasn't skated competitively since and focuses on a TV career. Medvedeva performed at the 2018 Games with a cracked bone in her foot. Three months later, she left Tutberidze’s camp to train with Brian Orser in Canada, saying she wanted to “work together with a coach like (a) friend.”

Lipnitskaya retired at 19, revealing she had struggled with anorexia. Chronic back injuries forced retirement last year for Elizabet Tursynbaeva of Kazakhstan, the first woman to land a quad at the world championships in 2019. Another Tutberidze skater, Darya Usacheva, suffered a serious injury in November and traveled home in a wheelchair.

Tutberidze's outlook and career were shaped by spending much of the 1990s in the United States.

Born in Moscow to Georgian parents, Tutberidze never made it to the elite of Soviet figure skating. After the Soviet Union collapsed, she headed to the U.S. to skate in ice shows.

In a rare interview published on the Russian Figure Skating Federation website in 2015, Tutberidze detailed how the dream turned sour. Other skaters had visa issues and her money ran out while waiting for them to arrive in Oklahoma. Without money, she attended Baptist church services for free food.

“We had to sit through the service, and afterward they brought out water for the congregation and some little sandwiches,” she said.

Tutberidze said she was living in a YMCA just a block away from the federal building in Oklahoma City when she was caught up in one of the worst terrorist acts on U.S. soil. The April 1995 bombing by anti-government extremist Timothy McVeigh left 168 people dead.

“Glass, rubble, smashed paneling, blood, mutilated bodies,” she said. “To begin with we didn't understand what had happened. There was a building and now it's not there, just dust, and on the intersection lumps of rubble instead of cars.”

Tutberidze's name is inscribed on a “survivors' wall” on the site of the blast. She spent six years in the U.S., first as a skater, then as a coach in San Antonio. Her daughter, Diana Davis, competing in Beijing on the Russian ice dance team, was born in the U.S.

She returned to Russia and worked for more than a decade before becoming an internationally recognized coach. Tutberidze has said life's successes require hard times — a philosophy that might also apply to her coaching style.

“It's a very comfortable, quiet life there (in the U.S.). Great people, wonderful relationships,” she said. “But for me, there's a lack of contrast in all that abundance. When there are no difficulties, you can't understand what happiness is.”

Dave Skretta in Beijing and Tanya Titova in Moscow contributed to this report.