Russians expect a 'gold medal, nothing else' at Olympics 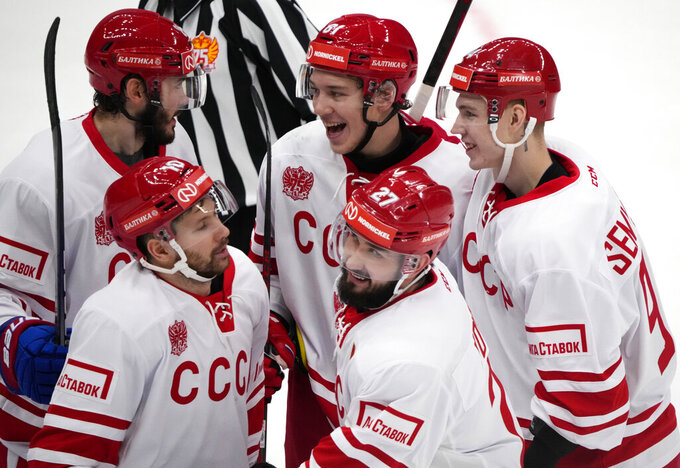 It's quite possible he will have to carry the Russians on the ice, too.

The Russians are the defending champions and favored to win gold again at another Olympics without NHL players. But they don't have Kirill Kaprizov, Ilya Kovalchuk and Pavel Datsyuk or any of their goaltenders back from 2018, so Shipachyov will be expected to lead the way for a team that does not lack confidence.

“We’re here to get the gold medal — nothing else," longtime NHL forward Artem Anisimov said.

The roster is so deep with KHL talent that Anisimov is in the mix but arrived late to Beijing and may not start the tournament on the 25-man roster. That group is led this time by Shipachyov, who has come a long way from a very brief, ill-fated move to the NHL and the Olympics four years ago when he was a nonfactor.

Now 34, Shipachyov is the KHL's leading scorer and the Russians' captain.

“Right now I think he is growing up, and he is playing more consistently every season,” coach Alexei Zhamnov said. “I think he is the leader of the national team right now. This Olympic Games is big opportunity for him to be the leader on our team.”

No one was following Shipachyov as recently as a few years ago.

In 2017, he signed a $9 million, three-year contract with the Vegas Golden Knights and scored one goal in three games before he was sent to the minors. Shipachyov refused the assignment to the American Hockey League's Chicago Wolves, had his contract terminated and returned to Russia.

Months later, he made the roster for the Olympic Athletes from Russia and should have played a prominent role. Instead, he was a healthy scratch for all but one game while Kaprizov and others led the team on a dominant run.

Shipachyov has since been more than a point-a-game player in the KHL. He has 67 points in 48 games with Dynamo Moscow.

“Obviously he’s done a lot of things for the national team and in the KHL, so everyone’s looking up to him,” forward Mikhail Grigorenko said. “He’s one of the best passers in the world and obviously the captain."

Anisimov called Shipachyov a game-changer who can "create a moment from nothing.” If they win gold, Shipachyov would be the first Russian or Soviet hockey player to win a gold medal after carrying the flag since Vladislav Tretiak in 1984.

While Grigorenko said “that’s not up to us to decide” if the Russians are favored, they are indeed the top betting choice on FanDuel Sportsbook.

“I think we’re probably one of the favorites, I would say,” Grigorenko said. “There’s a lot of guys who played in the NHL and played at the national team level.”

Canada captain Eric Staal played against several of the Russian players in the NHL, including defensemen Slava Voynov and Nikita Nesterov and forwards Nikita Gusev and Sergei Plotnikov, and he expects them to be competitive.

“We’re aware of the type of players they have in Russia,” Staal said. “We’d like to think pressure’s on them to defend.”

Zhamnov, who played more than 800 NHL games with Chicago, Philadelphia, Boston and Winnipeg, said there is pressure on Shipachyov to prove what he can do at the Olympics while younger players are looking up to him. With the three goaltenders from 2018 not around, that youth includes Timur Bilyalov, Ivan Fedotov and Alexander Samonov — all in their mid-20s.

From the net out, this is a proving ground for the Russians, who under various names and flags won eight of the previous 10 Olympic men's hockey tournaments without NHL players. The Russians have high expectations but know they have not won anything yet.

“We have a lot of experience here and also a lot of new faces, a lot of new guys, so I think everyone still has to prove ourselves,” Grigorenko said. “It’s a lot of pressure, but I think we can handle it.”