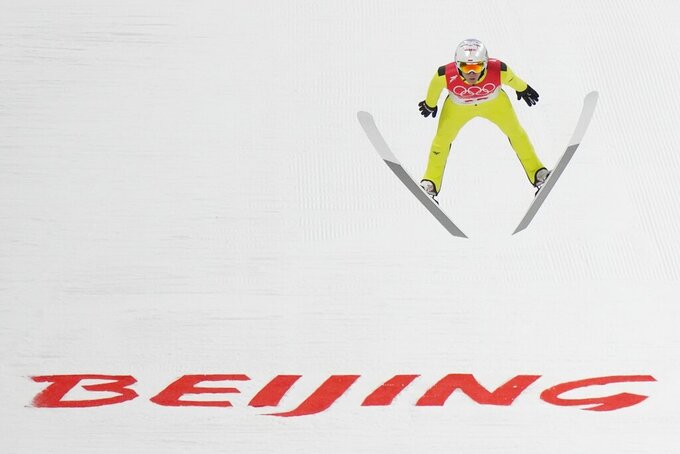 Dawid Kubacki, of Poland, soars through the air during the men's normal hill individual ski jumping first round at the 2022 Winter Olympics, Sunday, Feb. 6, 2022, in Zhangjiakou, China. (AP Photo/Andrew Medichini) 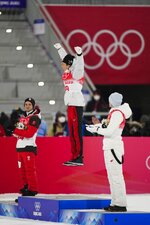 ZHANGJIAKOU, China (AP) — Ryoyu Kobayashi of Japan won Olympic ski jumping gold on the normal hill on Sunday, becoming the first from his country to win the event since Yukio Kasaya in 1972.

“Nothing special I was thinking about before, but I am so happy right now," the 25-year-old Kobayashi said through an interpreter.

Kobayashi is only the third jumper from outside Europe to win gold in an individual ski jumping competition, an event that has been in the Winter Olympics since the first edition in 1924. The other two are Kasaya and another Japanese jumper, Kazuyoshi Funaki, who earned gold on the large hill at the 2018 Olympics.

Kobayashi jumped last and best, clearing 99.5 meters (326 feet) and had 129.6 points thanks to his graceful style from start to finish.

Four years ago in South Korea, Kobayashi finished seventh on the normal hill and sixth on the large hill. He entered the Beijing Games as one of the favorites as the second-ranked jumper in the world.

“I had only good feelings when I was performing," he said. “At the last Olympics, I realized many things that I was missing so this time I did what I had to do. This is why I got the victory.”

The 36-year-old Fettner medaled at the Olympics for the first time. He became the second oldest to earn a spot on the podium in ski jumping, trailing only Noriaki Kasai of Japan, who won two medals in 2014 when he was 41.

“I’m very sure that it means much more to me than if I had won it 10 years ago," Fettner said. “It was a long wait. Tough times. God times. But if you wait for something longer, then you can celebrate it.”

Kubacki joined three-time Olympic champion Kamil Stoch and Adam Malysz as Poles who have medaled on the normal hill.

“All of the hard work paid off, and that’s amazing," Kubacki said.

Karl Geiger of Germany came to China as the No. 1 jumper in the World Cup standings and finished 15th.

“I’m not quite sure what exactly happened and why," he said.

Stoch bounced back from an injured left leg and finished sixth, looking like he's in good enough shape to possibly defend his large hill title on Saturday.

A pair of previous champions finished further back. Forty-year-old Simon Ammann of Switzerland was 25th and Robert Johansson of Norway was 20th.

With so many former champions in the field, Fettner said it meant a lot to him to win silver.

“Otherwise, I wouldn’t stand here and do this thing," he said.

After the first round, Turkish ski jumper Fatih Arda İpcioğlu refused to say if the crescent and star on his blue skis was a statement in support of China’s Uyghur community. The design on the skis used Saturday seemingly represented East Turkestan, the region home to Uyghurs.

“I don’t want to answer about those questions,” İpcioğlu said Sunday.

Human rights groups say the Beijing government has oppressed members of the Uyghur Muslim minority on a massive scale.

For the first time at the Olympics, men and women will compete together in a mixed team event on Monday.