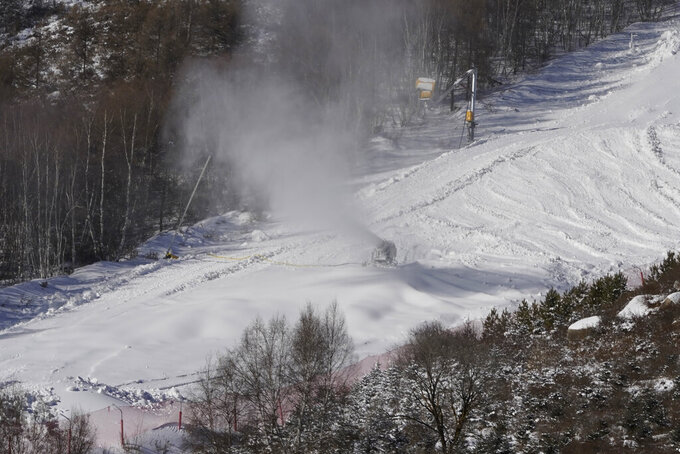 A snow making machine churns out artificial snow for a ski slope in Chongli county near Zhangjiakou in northern China's Hebei province on Wednesday, Dec. 16, 2020. The high demand for artificial snow at February's Beijing Winter Olympics will have a minimal effect on the local water supply, a spokesperson for the organizers said Thursday, Nov. 18, 2021. (AP Photo/Ng Han Guan)

GENEVA (AP) — Two-time Olympic medalist Beat Feuz is not thrilled about heading to Beijing for another Winter Games in a host nation with little ski tradition.

The expected favorite in men’s downhill on Feb. 6 said in comments reported on Thursday by Swiss media that it was “unfortunate” his third straight Olympics will again lack the atmosphere of classic European races in January.

“They’ve been great competitions,” Feuz said of racing at Sochi in 2014 and Pyeongchang in 2018, “but when you go after Wengen and Kitzbühel, it’s a bit of a culture shock.”

“I expect that the races in China will take place again in front of pretty empty stands,” said the four-time defending World Cup downhill champion.

Only Chinese residents can buy tickets for Beijing Olympic events, including alpine ski races on courses created for the games at the new resort of Xiaohaituo in Yanqing district.

International fans are not allowed at the Beijing Olympics because of Chinese travel restrictions during the COVID-19 pandemic.

Still, there were no public health rules in place at the 2018 Olympics where Feuz took bronze in downhill and silver in super-G on a sparsely attended and quiet hill at Jeongseon, South Korea.

The main grandstand was all but empty when Feuz and the other downhill medalists did media interviews in the finish area.

“I find it a shame that we’re again in a place where skiing doesn’t have a big tradition,” said the Swiss star, who will turn 39 during the 2026 Olympics. Then, alpine racing will return to heartland venues at Cortina d’Ampezzo and Bormio in Italy.

Feuz's home country was favored to host the 2022 Olympics until voters in the Swiss region of Graubünden voted down a bid by upscale neighboring towns St. Moritz and Davos. Other European cities also dropped out, leaving International Olympic Committee voters to choose in 2015 between Beijing and Almaty, Kazakhstan.

Feuz has not raced on the next Olympic courses because a scheduled stop on the men’s World Cup circuit to test them in February 2020 was canceled as the coronavirus outbreak spread from China.

This weekend, Olympic contenders in ski cross are in China for World Cup races to test their course at the Secret Garden resort.

Reports back from the Swiss team have concerned Feuz, who is in Canada preparing for the first World Cup downhill of the season on Friday at Lake Louise.

“I’ve heard from the skiers … that the process on arrival (in China) was quite complicated with the many constraints linked to COVID,” Feuz said, adding that one racer “had not yet been able to leave his room.

“These are difficult times.”