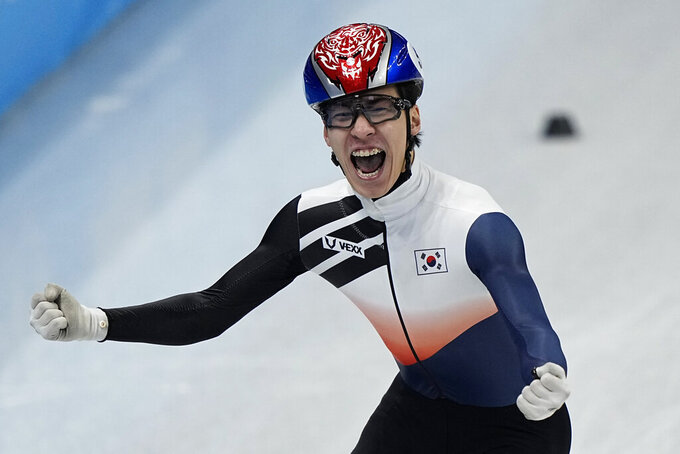 Angered by the disqualifications of two of its short track speedskaters at the Beijing Games, the country filed complaints and its citizens flooded social media urging the team to go home.

They stuck around, and Hwang Daeheon won gold in the men's 1,500 meters on Wednesday.

He edged his skate in front in a tight finish of the 10-man final at Capital Indoor Stadium, giving South Korea the title for the fourth time in six Olympics.

Hwang and teammate Lee Juneseo were disqualified in the semifinals of the 1,000 two days earlier. That triggered the South Korean contingent to complain to the International Skating Union and International Olympic Committee about the referee's judgment.

Hwang downplayed the passionate reaction to the earlier DQs of himself and Lee.

“The judges' decisions came because I didn’t have a clean game,” he said through a translator. “In today’s race it was the cleanest race and that was our strategy as well, so that’s why we could have this great result.”

In the 1,500, Steven Dubois of Canada earned silver. He crashed in his semifinal, but was advanced to the A final when 2018 silver medalist Sjinkie Kneght of the Netherlands was penalized.

South Korea was well represented in the final. Besides Hwang, Lee finished fifth and Park Janghyuk was seventh.

There were so many skaters in the final that six lined up on the start and the other four were on the back line. The pack circling the rink looked more like a relay than an individual final. But there were no crashes, unlike the second night of competition that was loaded with spills and penalties.

“I was starting on the back line so I got kind of squeezed at the start,” Dubois said. “When there’s 10 people in a race you can’t really be in back because there’s no way you’re going to come back. I did one big pass and that’s all it took to get a medal. It was definitely disbelief.”

China had been trying to topple the dominant South Koreans, but the host country failed to advance any skaters to the final. Ren Ziwei was penalized for an arm block in his semifinal.

“I expected too much from this race, so I made a stupid mistake,” Ren said through a translator.

Charles Hamelin of Canada, the 37-year-old world champion, was penalized for a lane change in the same semifinal, leading the referee to advance three skaters to the A final in addition to the top two finishers. That led to the unusual amount of skaters in the final.

South Korea's women had a good night, too.

Kim A Lang could become the first skater to win three consecutive Olympic titles in the same event when she and Seo Whimin, Choi Minjeong and Lee Yubin compete in the 3,000 relay final on Sunday.

South Korea has won gold six of the eight times the relay has been held at the Olympics, including the last two. Kim, Choi and Lee return from four years ago when they won in their home country.

Also moving on to the A final were Canada, China and the Netherlands.

The U.S. team of Kristen Santos, Corinne Stoddard, Maame Biney and Julie Letai will skate in the B final.

Defending Olympic champion Suzanne Schulting of the Netherlands was the top qualifier in the 1,000 heats.

Arianna Fontana of Italy, who is the most decorated short track skater in Olympic history, also moved on to the quarterfinals Wednesday.

Stoddard skated with a white bandage on her broken nose. She got hurt in a crash on the first day of competition.