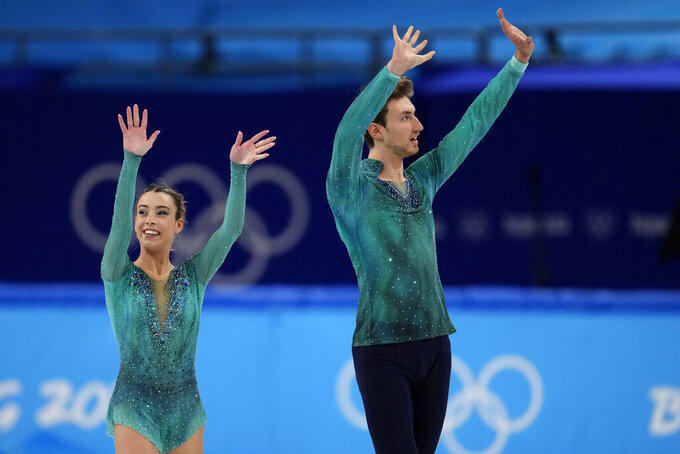 Laura Barquero and Marco Zandron, of Spain, wave after competing in the pairs free skate program during the figure skating competition at the 2022 Winter Olympics, Saturday, Feb. 19, 2022, in Beijing. (AP Photo/Natacha Pisarenko)

BEIJING (AP) — Spanish figure skater Laura Barquero has become the fourth athlete to fail a doping test at the Beijing Olympics after testing positive for the banned steroid clostebol, the International Testing Agency said on Tuesday.

Barquero and her partner Marco Zandron finished 11th in the pairs competition, which finished on Saturday. The ITA said her positive sample was given after the short program on Friday and the case will be heard by the Court of Arbitration for Sport.

The Spanish Olympic Committee said in a statement that it had received notification of the anomalous finding of a “Spanish athlete” without naming the skater.

“From the Spanish Olympic Committee we are waiting for the result of the counter-test, a result that every athlete has the right to request,” it added.

Fifteen-year-old Russian figure skater Kamila Valieva was the focus of attention during the Olympics because a sample she gave before the Games came back positive for a banned substance. Valieva was allowed to keep skating in Beijing in part because her age gives her extra rights in anti-doping matters. She could yet be stripped of the gold medal she won in the team event before the lab analysis was reported.