Swimmer Ryan Lochte miffed at his times in return to racing 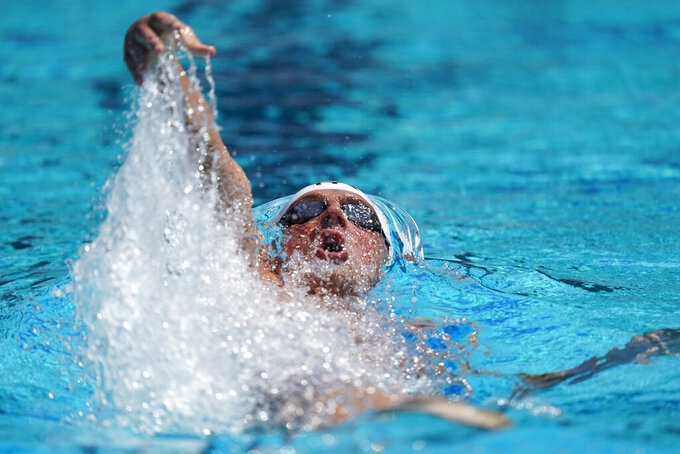 FILE In this July 31, 2019, file photo, Ryan Lochte competes in the men's 200-meter individual medley time trial at the U.S. national swimming championships in Stanford, Calif. Lochte was ticked off about his performances in the pool at the U.S. Open, the first major meet on American soil since the coronavirus pandemic shut down sports in mid-March. Lochte finished third in the 200-meter individual medley with a time 2 minutes, 1.05 seconds Friday — well behind winner Chase Kalisz in 1:59.72. (AP Photo/David J. Phillip, File)

The 12-time Olympic medalist known for his goofy smile and laid-back attitude was ticked off about his performances in the pool at the U.S. Open, the first major meet in America since the coronavirus pandemic shut down sports in mid-March.

Lochte finished third in the 200-meter individual medley with a time 2 minutes, 1.05 seconds on Friday — well behind winner Chase Kalisz in 1:59.72. He was 26th in the 200 freestyle and 51st in the 100 backstroke. Lochte swam the 200 back on Saturday and dropped the 100 free. Times from all nine meet sites were combined to determine overall placement.

“This is probably going to go down as my worst meet that I’ve ever had,” he said by phone from Sarasota, Florida. “I do not like swimming this bad. When I get back (home), I’m going to start turning it up again.”

Lochte's former U.S. national teammate Dara Torres endured her own setbacks in qualifying for a fifth Olympic team in 2008.

“Sometimes it’s good to be discouraged, because you figure out went wrong and get a new attitude,” she told The Associated Press by phone.

At 36, Lochte is taking aim at making a fifth Olympic team. He’s easily the oldest swimmer on deck, surrounded by youngsters who he jokes were in diapers when he won his first gold medal at the 2004 Athens Games.

Time is not on his side. Lochte figures he’s competed in just seven meets since 2016. He only resumed training about five weeks ago, his plans disrupted in part by closures and restrictions put in place because of the coronavirus. Future competitions are up in the air, depending on the pandemic. The U.S. Olympic trials are next June, about a month before the rescheduled Tokyo Games.

“I need to be racing at least once a month with really good competitors,” he said. “I don’t want to lose that confidence.”

Lochte is eager to replace the debacle that was the 2016 Rio Olympics with better memories before calling it quits. He grabbed international headlines after claiming he and three teammates were robbed by armed men with police badges in Rio. Brazilian authorities denied Lochte’s version of events. Eventually, he apologized for lying about the incident that cost him sponsors and a 10-month suspension.

In 2018, he was suspended for 14 months after posting a photo of himself receiving a vitamin injection at a dosage over the allowable limit. The repeated hits to his good-guy image were incalculable.

“I feel like inside I want to prove everyone wrong,” he said. “I want to do it for myself. I guess this year is way more important than any I’ve ever had.”

“I don’t know if I’m mentally tired. I know I’m physically tired,” he said. “I love getting on those blocks and racing again."

Torres said, “Hopefully he’s not training like the young kids. You have to listen to your body.”

Torres was the first U.S. swimmer to compete in five Olympics, including two different appearances eight years apart. She was 41 in 2008 when she won silver medals in all three of her events in Beijing. Torres’ daughter was 2 years old at the time of her mother’s last games.

Lochte's family has expanded, too, since 2016, with wife Kayla, 3-year-old son Caiden and 1-year-old daughter Liv.

“It used to be me going off to the bars,” he said. “Now it’s me going home and chasing kids around and changing diapers, but I love it.”

Torres said Lochte's family responsibilities could actually be helpful in keeping him at home and resting when he's not at practice.

“It’s only November and he and his coach can tweak whatever they need to and figure it out,” she said. “He still has a lot of time. He should take that as a plus, figure out what wrong and do what he has to do.”

Lochte is back with Gregg Troy, his old college coach at Florida who guided him throughout his long rivalry with Michael Phelps. Troy retired from leading the Gators two years ago, although he has remained in Gainesville, where Lochte and his wife are in the process of buying a house.

Lochte said he’s still in touch with Phelps, who retired after Rio and has three boys of his own now.

Lochte looks around the pool deck at his young competitors and admits not knowing their names and who is the fastest.

“They all come up to me for questions because I’ve been in swimming forever,” he said. “I help out the younger generation. It’s still fun.”

Lochte still has his supporters, whether it’s his fans who know he’s always willing to accommodate their requests or those in the sport.

Jon Urbanchek, the 84-year-old retired Michigan coach, had a front-row seat for many of Lochte's successes and failures.

“He’s a beautiful, very loving person. He admits he made some bad judgments,” Urbanchek said. “He deserves to have an honorable exit."