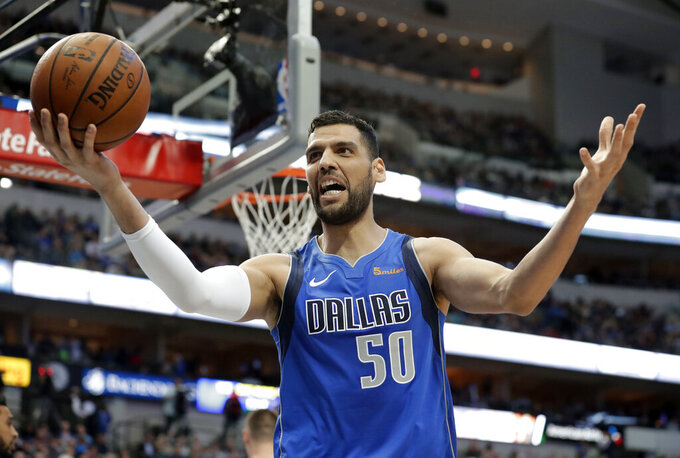 FILE - In this Friday, Feb. 22, 2019 file photo, Dallas Mavericks center Salah Mejri in action during the team's NBA basketball game against the Denver Nuggets in Dallas. While the AfroBasket tournament doesn’t boast the star power of an Olympics, it does showcase ever-competitive and improving quality of basketball on the continent. Mejri, a more slender 7-foot-2 center who played for the Dallas Mavericks from 2015-19, hopes to use his 3-point shooting to draw former NBA draft pick Walter “Edy” Tavares away from the basket. Ugandan players struggled in the paint, knowing Tavares was looming to swat away shots. (AP Photo/Tony Gutierrez, file)

The Real Madrid center has led his squad into the AfroBasket semifinals to face defending champion Tunisia on Saturday, when Senegal squares off with Ivory Coast in the other final-four game in host city Kigali, Rwanda.

While the FIBA tournament doesn't boast the star power of an Olympics, it does showcase the ever-competitive and improving quality of basketball on the continent. It also gives dual nationals and a handful of naturalized citizens — like former UCLA star Michael Roll of Tunisia — a chance to represent a country.

The 260-pound Tavares, selected by the Atlanta Hawks in the second round of the 2014 NBA draft, has been a force inside for his archipelago nation, population about 550,000.

Uganda had no answer for Tavares in their quarterfinal game Thursday, when he scored 23 points and added 15 rebounds, five blocks and four assists. Cape Verde won 79-71.

“It’s going to be a dogfight,” Tunisian counterpart Salah Mejri said of Saturday's game. “Edy is a great player. He’s been the best (center) in Europe. That’s not easy now. There’s a lot of great big men in Europe.”

Mejri, a more slender 7-foot-2 center who played for the Dallas Mavericks from 2015-19, hopes to use his 3-point shooting to draw Tavares away from the basket. Ugandan players struggled in the paint, knowing Tavares was looming to swat away shots.

The 35-year-old Mejri, the tournament MVP in 2011 when Tunisia won for the first time, hit three 3-pointers in their 80-65 win over South Sudan on Thursday. He finished with 20 points and seven rebounds. Mejri was just 1 of 8 from distance in his prior three games, however.

Despite the loss, South Sudan was hailed for reaching the quarterfinals on its AfroBasket debut. Luol Deng, the two-time NBA All-Star who was born in South Sudan, has built the country's program since becoming president of the national basketball federation after retiring as a player in 2019.

"We’ve got a lot to be proud of," said coach Royal Ivey, who is a Brooklyn Nets assistant coach. “You can’t buy experience, you have to go through the fire. The South Sudan national team is on the rise.”

Senegal's big name is big man Gorgui Dieng, an eight-year NBA veteran who signed with the Hawks last month. Dieng, a first-round pick in the 2013 NBA draft, had 13 points and 15 rebounds in Senegal's 79-74 quarterfinal victory over Angola.

“We’re smaller than them. We’re going to use that weakness to our advantage,” Konate said. “I hope for them that they like to run.”

Ivory Coast cruised into the semifinals with a 98-50 win over Guinea, backed by Matt Costello's 14 points and nine rebounds. Costello played for Michigan State.

Senegal is a five-time champion but last won in 1997, while the second of Ivory Coast's two titles was in 1985.

“We have the best team that Cabo Verde has ever had,” said point guard Jeffrey Xavier, a Rhode Island native who played at Providence College. “We’re here in the semifinals and I don’t think we’re done. That’s what we have to understand, we’re not done. We want more.”