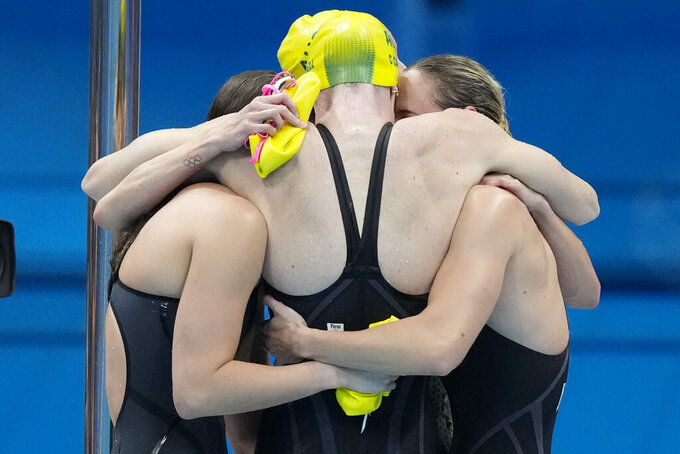 The team from Australia celebrates after winning the final of the women's 4x100m freestyle relay at the 2020 Summer Olympics, Sunday, July 25, 2021, in Tokyo, Japan. (AP Photo/Charlie Riedel)

TOKYO (AP) — You could see by the way they huddled afterward, arms linked and beaming smiles on every face, that this team is tight.

Just about untouchable, too.

Australia claimed a third straight gold in the women's 4x100-meter freestyle relay in world-record time at the Olympics on Sunday.

Bronte Campbell led them off at Tokyo Aquatics Center and her older sister Cate swam anchor to power the Aussies home in 3 minutes, 29.69 seconds, breaking the 3:30 mark and bettering their own world record of 3:30.05 set at the Commonwealth Games in 2018.

The first day of finals swimming at the Olympics was headlined by the United States' haul of six medals. But the session ended with yet another Aussie triumph in the 4x100 freestyle, a result that's almost expected now at the Olympics.

“Yeah, breaking a world record is incredible," said Bronte Campbell. “We were just going out there to do our job.”

Simone Manuel and the U.S. team took bronze behind Canada.

Australia's back-to-back-to-back Olympic victories have all been majorly impressive. The Aussies also won with a new WR at the last Olympics in Rio de Janeiro and set an Olympic record in London.

The Campbell siblings marked what might be their last contributions to the Australian 4x100 tradition by presenting each other with their gold medals. With no officials to hang medals over athletes' necks at these Games because of COVID-19, the Campbells did it for each other, their own intimate family medal ceremony on the podium.

They walked away after the ceremony with their arms around each other.

Bronte has swum in the final on the last two gold-winning teams. Cate swam all three finals.

Having sisters on the team no doubt helps foster unity. The real secret, Cate Campbell said, is ensuring that tight team spirit is blended in the right way with a competitive rivalry between the team members.

“We come together at least once a year and train together for a full week, and we push each other and we challenge each other,” Cate Campbell said. "But we do that in a really supporting way.

“There’s no malice and no animosity towards one another and I think that has just spoken volumes.”

The idea for the Campbell sisters to present medals to each other came from Meg Harris, the 19-year-old newcomer to the team who didn't think she'd be swimming the final.

“I was so happy last night just swimming in the heats with these girls,” Harris said. “To have the opportunity to do it again is insane. I’m just happy to be here at this point.”

Emma McKeon swam a blistering third leg, with her performance inspired, she said, by the reputation of the team and the standards it has set. McKeon was also part of the victorious lineup in 2016.

“With these girls, the adrenaline’s always high,” she said.