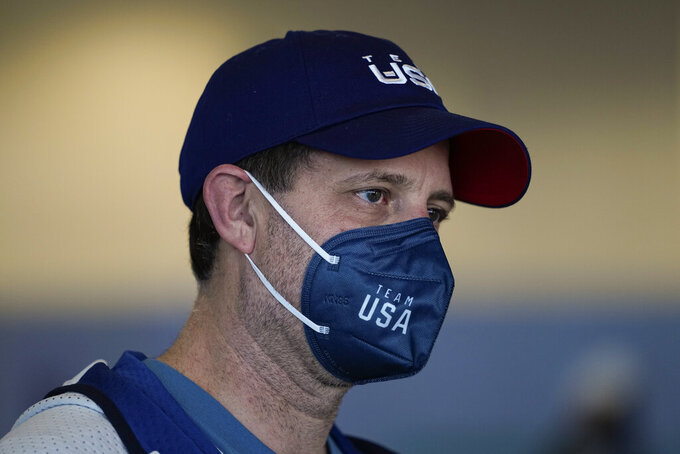 BEIJING (AP) — The referee came out to measure, and the Russians came away with the game-tying point in the final end of regulation against the Americans — the reigning Olympic curling champions.

It only prolonged the suspense for a few minutes.

John Shuster delivered a routine draw with the final rock in the extra end, and the United States opened their title defense with a 6-5 victory over the Russian Olympic Committee team on Wednesday night at the Ice Cube curling venue.

The Americans would have won it in regulation except for a Russian rock that was just millimeters closer to the center of the scoring target. And the Russians had a chance in the 10th for the two points that would have delivered a regulation victory, but skip Sergei Glukhov’s final shot nicked a guard and slid helplessly to a stop out of the scoring area.

“We got a little fortunate to get have him not make that,” Shuster said. “And then we played a pretty good extra.”

Four years after they survived five straight elimination matches to win gold, the U.S. team remained on course for another strong showing.

With the Americans trailing 4-3 after seven ends, Shuster executed a cheeky split for two to grab the lead. The Russians blanked the ninth end on purpose, retaining the last-rock advantage for the 10th.

Shuster’s last shot in regulation put an American red rock and a Russian yellow one virtually the same distance from the center of the target. The Russians peered over the stones to try to determine if they were in position for the two points that would have given them a regulation victory; even one point would get them to extra ends.

But it was too close to know for sure. They wouldn’t find out until after the end was over — and it could be too late.

“My gut was saying that that it probably wasn’t going to go our way,” Shuster said. “I had a pretty good read on it, and I thought that it was.”

Glukhov attempted to thread a difficult opening with his final throw and nicked one of the guarding stones. Teammate Evgenii Klimov slammed down his brush in frustration.

Then the referee came out, using a device that measures the distance from the center of the target down to the millimeter. As he swung it between the two rocks in question, the dial showed Russia had earned the point and a 5-5 tie.

But Glukhov's miss would cost them.

In the tiebreaking extra end, the Americans would have the last-rock advantage known as the hammer. Shuster delivered with a routine draw that settled inside Russia’s stone for the victory.

“When you come into the 10th, if you’re one point ahead your goal is to force them into one (point) so you can play the extra end with the hammer,” Shuster said.

In other matches in the opening session of the men’s round-robin, Canada beat Denmark 10-5 in eight ends, Sweden beat China 6-4 and Norway beat Switzerland 7-4.

The women's tournament begins on Thursday.