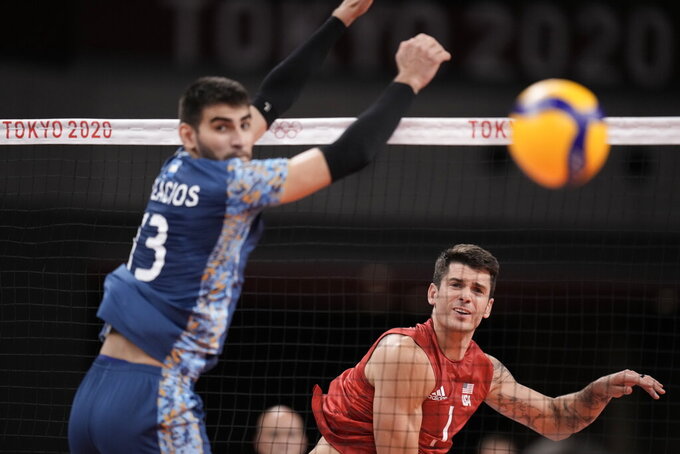 Matthew Anderson, of the United States, spikes a ball past Argentina's Ezequiel Palacios, during a men's volleyball preliminary round pool B match, at the 2020 Summer Olympics, early Monday, Aug. 2, 2021, in Tokyo, Japan. (AP Photo/Manu Fernandez)

Instead of building on the bronze medal won in Rio de Janeiro five years ago, the Americans are going home early from the Olympics for the first time in more than 20 years.

“It's heartbreaking,” Christenson said after the straight-set loss to Argentina on Sunday night denied the U.S. a spot in the quarterfinals.

“We worked really hard for this. We delayed another year to work as hard as we could for this. This isn't the way we wanted to finish plain and simple. It's heartbreaking.”

The Americans won two of their first three matches in Tokyo before losing to Brazil and Argentina to fall to fifth place in Pool B and miss out on the quarterfinals for the first time since losing all five matches in Sydney 21 years ago.

The U.S. brought eight players back from the team that won bronze in 2016, but never got back into top form following the long break because of the COVID-19 pandemic.

The Americans struggled in a tune-up tournament in Italy, and that didn't change in Tokyo. They started off well by sweeping France in the opener but lost three of their last four matches.

“It’s next to impossible to process it right now,” said Matt Anderson after his third Olympics. “It will be a hard couple of weeks after this tournament thinking about it. I think that’s part of our process as athletes and what we’re forced to do when something means this much to you. It’s going to hurt. It takes time to process that and move on.”

Argentina battled back after losing the first two matches of the Olympics to advance as the third-place team in Pool B with three straight wins. Argentina will play Italy in the quarterfinals on Tuesday.

Argentina took advantage of the Americans faulting on five of their final six serves late in the third set to close out the match. Christenson's serve into the net at 23-all gave Argentina match point. The match ended when Taylor Sander’s block went wide.

The errant serves were a recurring problem all Olympics as the U.S. had the most serve errors with 97, including several at key moments late in sets.

“It makes me wonder if they were just trying to do too much in that moment,” Speraw said.

The U.S. was fighting uphill nearly all game. Argentina was the better serving team early, getting three aces from Facundo Conte in the opening set to pull it out 25-21.

The U.S. scored five straight points to go up 21-19 in the second set but couldn't close it out. Bruno Lima's spike after a long rally gave the Argentina a set point and it closed it out on a block by Martin Ramos against TJ DeFalco.

The U.S. then couldn't close out the third set and now heads home early.

“This team is a great team,” Speraw said. “I honestly just feel like we could go win the world championships next year. It’s obviously not worth thinking about right now, but we’re just going to have to learn and gain from this experience. It’s all you can do right now.”

Earlier in the day, France forced Brazil into five sets before losing 20-18 in the fifth. But by gaining one point in the match thanks in part to an epic 39-37 win in the second set, the French clinched a spot in the quarterfinals as the fourth-place team in Pool B.

The Russian Olympic Committee team took first place in the pool ahead of Brazil after sweeping Tunisia.

The other quarterfinal spot was decided when host Japan beat Iran in five sets to claim third place in Pool A. Japan will play Brazil in the quarterfinals.

Poland swept Canada to improve to 4-1 in the tournament and win the pool, earning a matchup against France on Tuesday.

The Canadians still advanced as the fourth-place team in the pool and will play the Russians in the quarters. Italy swept Tunisia to finish second in Pool A.