USOPC says it is trying to help Humphries' Olympic quest 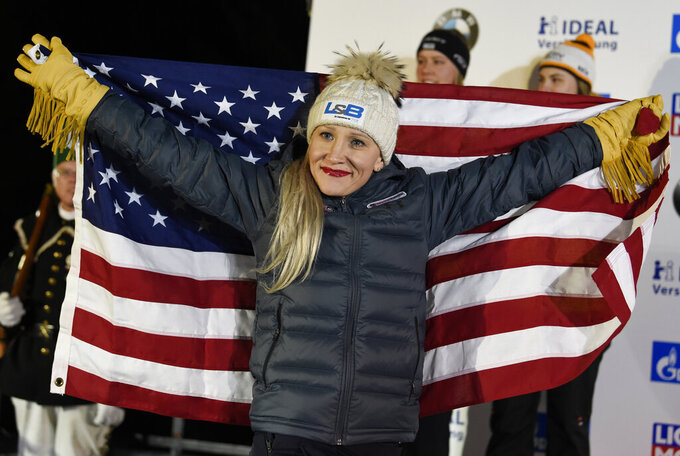 FILE - Gold medalist Kaillie Humphries of the United States celebrates during the medal ceremony for the two-woman bobsled competition at the Bobsleigh and Skeleton World Championships in Altenberg, Germany, in this Saturday, Feb. 22, 2020, file photo. The U.S. Olympic and Paralympic Committee said Tuesday, Oct. 19, 2021, that it is still trying to help world champion bobsledder Kaillie Humphries obtain a way to compete in this winter's Beijing Games. (AP Photo/Jens Meyer, File)

The U.S. Olympic and Paralympic Committee said Tuesday that it is still trying to help world champion bobsledder Kaillie Humphries obtain a way to compete in this winter's Beijing Games, though it stopped short of predicting if the effort would be successful.

Humphries, a three-time Canadian Olympic team member and two-time Olympic champion, is entering her third season as part of the U.S. bobsled team. She is married to an American and lives in San Diego but is still a Canadian citizen — and needs either a U.S. passport or special permission from the International Olympic Committee to compete at the Games.

The IOC has given Humphries and U.S. officials no indication that it will assist, so Humphries' hopes almost certainly hinge on her obtaining a U.S. passport in the coming months.

“We would be very, very excited to have Kaillie on Team USA as we go to Beijing," USOPC CEO Sarah Hirshland said Tuesday. “We’ve been very proud to have her competing on our team here recently. And we are absolutely engaged in discussions to do everything that we can and we have been working very closely with US Bobsled and Skeleton to try to advance those conversations."

USABS officials and others involved on Humphries' behalf have been asking lawmakers to see if there is any way the passport that she would be in line to receive in 2023 could be expedited. Such a request is not unprecedented for would-be U.S. Olympians; most notably, figure skater Tanith Belbin got help from Congress to get her passport in time to compete in the 2006 Turin Olympics.

Humphries obtained her release from the Canadian program in 2019, after a long dispute with that team's officials over her claims that she was subjected to harassment and abuse by at least one coach. It left her feeling unsafe, she has said, which is why she wanted to begin competing for the U.S.

Canada eventually agreed, and Humphries has been trying to get her U.S. passport since. Humphries has won 10 gold medals in various competitions during her first two seasons with USA Bobsled, including three world championships, and would be considered the gold-medal favorite in both women's bobsled events at the Beijing Games.

“We’ll continue to put all efforts forward," Hirshland said. “At this point, I can’t speculate on what the outcome of that will be. But I can tell you, we’d be awfully happy to have Kaillie on our team."

Humphries is scheduled to race when the bobsled season opens with women's races at the track built for the Beijing Games in Yanqing, China, early next week. She can compete in World Cup and world championship races for the U.S. without a passport; the rules are different for Olympic competition.