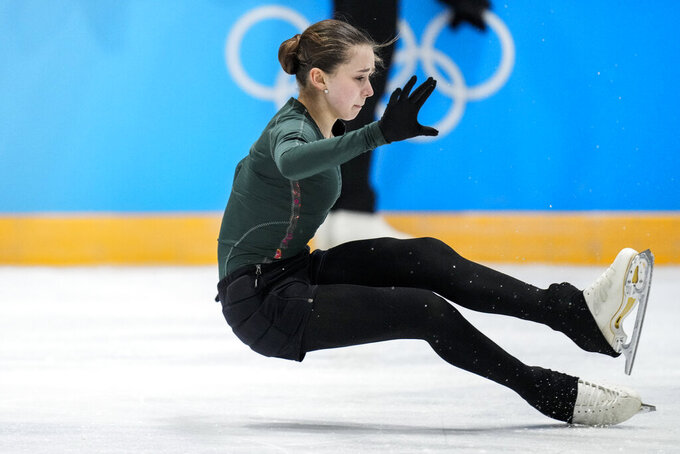 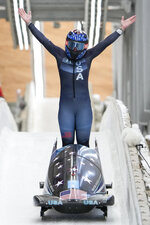 BEIJING (AP) — Teen sensation Kamila Valieva has been cleared for takeoff in women’s figure skating in a ruling in a Russian doping case that has caused havoc with one of the marquee events of the Beijing Olympics.

Valieva will have a chance for a second gold medal at this year's Olympics after the Court of Arbitration for Sport ruled Monday she can compete this week despite failing a previous drug test.

The 15-year-old Valieva already set Beijing abuzz when she landed the first quadruple jumps by a woman at the Olympics during her thrilling performance that helped the Russians win the gold medal in the team event. She is the favorite in the women’s individual competition that starts Tuesday with the short program and concludes Thursday with the free skate.

Valieva has been practicing regularly since the doping scandal broke and skated in her allotted practice time slot shortly after CAS released its ruling. The ruling came less than 12 hours after a hastily arranged hearing that lasted into early Monday morning. CAS decided that she does not need to be provisionally suspended ahead of a full investigation. She tested positive for a banned heart drug on Dec. 25.

The court gave her a favorable decision in part because she was a minor — a “protected person” — and was subject to different rules from an adult athlete.

Now, Valieva and her fellow Russian skaters can aim for the first podium sweep of women’s figure skating in Olympic history.

The ruling doesn’t decide the fate of the gold medal she won as part of the team competition. The United States won silver and would be in line for gold if the Russian medal is revoked.

The International Olympic Committee said there will be no medal ceremony if Valieva places in the top three in the women’s individual event.

U.S. Olympic and Paralympic Committee CEO Sarah Hirshland said the committee is disappointed by the message the ruling sends. She said athletes are being denied the right to know they’re competing on a level playing field and that it’s part of a systemic and pervasive disregard for clean sport by Russia.

Mikaela Shiffrin will race in Tuesday’s downhill, her fourth event at the Beijing Games and the first time she’s competed in that event in her Olympic career.

She finished a second training session at the Yanqing Alpine Skiing Center with the 15th-fastest time among the women who didn’t miss a gate.

The two-time gold medalist in Alpine skiing did not finish her opening runs in either of her first two events, the two-leg giant slalom and slalom. She then finished ninth in the super-G, another race she hadn’t previously entered at an Olympics.

Kaillie Humphries of the United States made history by winning the Olympic debut of monobob, the one-woman bobsled.

Humphries won two gold medals and one bronze for Canada. She joined the U.S. team in 2019 after saying she had suffered mental and emotional trauma and no longer felt safe being a part of that program.

When she crossed the finish line, she waved an American flag and chanted “U-S-A! U-S-A!”

“As I age, I’ve learned life is very unpredictable and we don’t always know our path forward and what the future holds,” Humphries said. “We do the best we can with each and every obstacle or path change that gets thrown at us. What’s important is to fight for ourselves.”

American ice dancers Madison Hubbell and Zachary Donohue won the bronze medal and then bent down and kissed the ice where the Olympic rings are painted.

“It was just a moment, I think, for both of us to say goodbye to Olympic ice and thank this journey that’s created, you know, the people that we are today,” Hubbell said.

Their decade-long career ended with a last Olympic skate in the free dance, to Anne Sila’s “Drowning.”

The United States has medaled in each of the first three figure skating events at the Beijing Olympics. Hubbell and Donohue were part of the team silver medal before Nathan Chen won gold in the men’s event. Chen was part of a loud American contingent cheering on Hubbell and Donohue at Capital Indoor Stadium.

Eileen Gu snacked on a fried dumpling filled with chives and vermicelli noodles while awaiting her score in slopestyle qualifying. Once she found out she finished third among the top 12 who moved into Tuesday’s final, she raced over to practice on the halfpipe for her third event later this week.

“I didn’t have time to sit in the lodge,” China’s emerging freestyle star said later, following her halfpipe practice. “I’m a very aggressive practicer. For me, practice is go-go-go. I brought lunch. I was eating on the t-bar. I was done by the time I got to the top, and ready to drop in immediately.”

The 18-year-old Gu has already won one gold, in big air.

Xu Mengtao — a daredevil nicknamed “Tao Tao” — landed a jump with three somersaults to become the first woman from China to win the gold medal in ski aerials. She leaned back and screamed into the air as the temperature hovered around minus-10 degrees F (minus-23 degrees C).