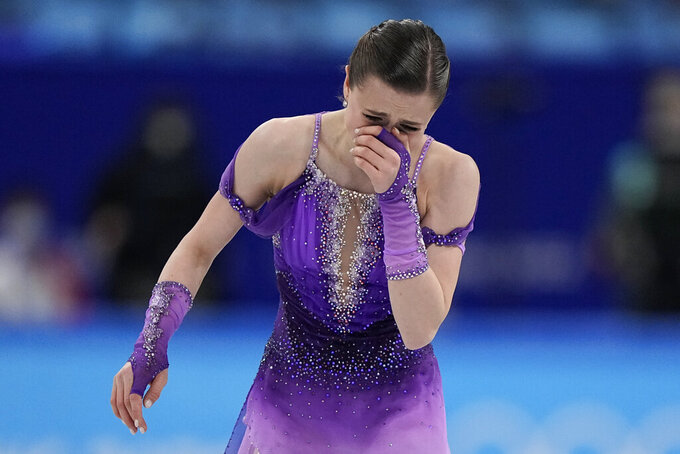 Kamila Valieva, of the Russian Olympic Committee, reacts in the women's short program during the figure skating at the 2022 Winter Olympics, Tuesday, Feb. 15, 2022, in Beijing. (AP Photo/David J. Phillip) 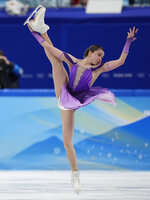 BEIJING (AP) — Kamila Valieva skated off the Olympic ice with the lead in the women's short program and tears in her eyes.

They were not tears of joy.

The enormous pressure and scrutiny on the 15-year-old Russian dynamo, who is at the center of the latest Olympic doping scandal, appeared to finally get to her Tuesday night. Despite an incredible performance by the standards of just about anyone else, Valieva could hardly hold it together while she awaited her scores.

She wound up earning 82.16 points, more than eight off her own world record, but more than enough to top teammates Anna Shcherbakova and Alexandra Trusova as they go for a Russian sweep of the podium.

Valieva did not speak afterward, walking through the mix zone of reporters in stoic silence. The Russian Olympic Committee also declined to bring her to the news conference, which is required only for medal rounds, and when asked about the scandal, Scherbakova said: “I will not say anything about this situation.”

“Whether it is fair, I am not quite sure,” said Japan's Kaori Sakamoto, who sits in third place. “I would like to refrain from answering that question. Right now I would just like to focus on my own performance.”

Shcherbakova, the reigning world champion, was second with 80.60 points after a clean program. Sakamoto's score of 79.89 points broke up the “Quad Squad” with Trusova, who fell on her opening triple axel, in fourth with 74.60.

“I think that everything was like always, like every competition,” Shcherbakova said. "I didn’t feel anything different from other competitions, and it was really controlled (and) focused.”

The trio of Russian women, all coached by the embattled Eteri Tutberidze, are trying to deliver the second podium sweep in Olympic figure skating and the first in the women's competition. The free skate is Thursday night.

For the last week, Valieva's positive drug test from an event in December has shrouded the competition in controversy.

The test was flagged by a laboratory in Sweden for a banned heart medication but only emerged last week, after her two brilliant performances in the team competition helped win gold for the Russia Olympic Committee.

The Court of Arbitration for Sport ruled that Valieva should be allowed to compete while anti-doping officials conduct a full investigation — in part because she is a minor and is subject to different rules from an adult athlete.

Lawyers for Valieva also “brought some doubts about her guilt,” veteran IOC member Denis Oswald said Tuesday. Russian lawyers speculated that the sample may have been contaminated by medicine her grandfather was taking.

In her only comments since the drug test surfaced, Valieva told Russian state broadcaster Channel One on Monday night that “these days have been very difficult for me. I’m happy but I’m tired emotionally.”

Valieva said the entire process had taught her that adult life “can be unfair to some extent.”

Others pointed out that the real unfairness came in Valieva performing despite a positive test for a banned substance.

“I can only speak for myself and that I advocate for clean sporting,” said Mariah Bell, who along with U.S. teammates Alysa Liu and Karen Chen advanced to the free skate. “That’s the whole idea of the Olympics and our careers, in general.”

Valieva and her teammates had plenty of support from the carefully curated crowd inside Capital Indoor Stadium. There were even several fans waving Russian flags, which the team can't use at Olympics as punishment from the country's state-sponsored doping scheme at the 2014 Sochi Games.

There also were plenty of fans that sat stoically in the stands when Valieva's name was announced.

Her biggest mistake came on her first element, the difficult triple axel, when Valieva barely held onto the jump through the opening chords of Kirill Richter's “In Memoriam.” She had no such problems with her triple flip and her triple lutz-triple toe loop, and she received Level 4 marks on the rest of her program to climb into first place.

“The (Russian) girls are such that nothing would have helped them if they didn’t have that kind of talent,” said Anastasiia Shabotova, who was born in Moscow but competes for Ukraine. “It’s just funny to even think about it. They’re just talented and do a lot of work.”

Valieva had looked calm and confident during her warm-up session hours before her short program, though she did fall twice on the triple axel. Each time, the shy, reserved Russian quickly got up and kept pressing forward.

Just as she's done all week, even amid the tension engulfing her team.

Regardless of what happens Thursday night, there won't be a podium presentation or medal ceremony if Valieva finishes in the top three. The International Olympic Committee, concerned that she could still be banned after a full investigation, said it would instead “organize dignified medal ceremonies” in the future.

Valieva and her teammates are trying to extend an era of Russian dominance in women's figure skating at the Olympics. It began at the 2014 Sochi Games, when the country's state-sponsored doping scheme first came to light, and Adelina Sotnikova won the gold medal for the host nation. Alina Zagitova and Evgenia Medvedeva followed with a one-two finish for what was known as the Olympic Athletes from Russia at the 2018 Pyeongchang Games.

Zagitova and Medvedeva also were coached by Tutberidze, the former ice dancer-turned-kingmaker who has been criticized for pushing young skaters to extreme limits in her brazen pursuit of Olympic medals.

The World Anti-Doping Agency announced this week it will investigate Tutberidze along with the rest of the entourage surrounding Valieva in the lead-up to the Olympics.

“She’s pretty much a product of the adults around her,” Switzerland's Alexia Paganini said, "so I have a lot of empathy for her because she, regardless of everything, did have to get on the ice and work hard, no matter what happened around her. She did endure a lot. So I feel sorry for her, but rules are rules and they should be followed.”