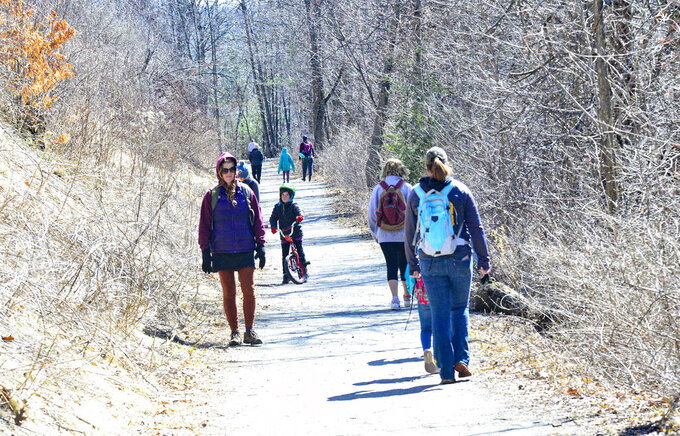 People get some exercise on a sunny day at the West River Trail, in Brattleboro Vt., as they try to keep some distance during the COVID-19 outbreak on Saturday, March 21, 2020. (Kristopher Radder/The Brattleboro Reformer via AP)

MONTPELIER, Vt. (AP) — The state of Vermont is planning for a peak of COVID-19 patients at the end of April or early May and planners are working to ensure there are enough medical resources to deal with the people who become ill and need medical care, officials said.

There are indications the state's stay-home order and social distancing is having the desired effect because different disease models are beginning to show a slowing of the rate of new infections.

Early on in the current outbreak, Vermont's cases of COVID-19 were doubling every three days. The most recent doubling of cases took more than five days, said Michael Pieciak, the commissioner of Vermont's Department of Financial Regulation who is working on the state's disease response.

“'It is indicating to us that part of this is due to the sacrifices that Vermonters are making,” Pieciak said during a telephone briefing for members of the news media, cautioning that the numbers can change.

"It tells us also that they need to keep up those sacrifices and, in fact, double down on them because even though we are seeing some incremental progress we do know that the worst is still ahead of us," he said.

The Vermont National Guard is preparing and will provide most staff for a 400-bed location at the Champlain Valley Fairgrounds in Essex Junction. Another 150-bed site will be set up in Rutland Country, which will be run primarily by the Rutland Regional Medical Center.

Those locations are in addition to three locations already set up in Barre, St. Albans and at the University of Vermont in Burlington.

During the briefing acting Human Services Secretary Michael Smith said most of those beds would be used for non-COVID-19 patients so people who are suffering from the disease can be treated in the hospitals.

The officials are also working to ensure the state has enough equipment, including personal protective equipment, such as masks and gloves, and ventilators needed to care for the most ill patients.

As of Thursday, Vermont had reported almost 340 positive cases of COVID-19 and 17 deaths. Almost 30 patients were being treated in the state's hospitals. More than 40 additional patients are hospitalized and likely have the virus.

A staff member at the Northwest State Correctional Facility in Swanton has tested positive for the coronavirus, the Vermont Department of Corrections said.

In a release sent late Wednesday, the department said the employee had “limited interactions” with the inmate population, but the worker, who was last in the facility March 25, had no such interaction in the 48 hours before showing symptoms.

No Vermont prison inmates at the Swanton facility or elsewhere have tested positive for COVID-19.

Two Vermont ski areas closed by the coronavirus outbreak say they are no longer going to allow skiers to climb the slopes on their own without ski lifts and ski down on their own.

Matt Lillard, of the Mad River Glen ski resort, and Win Smith of Sugarbush, say that as of dusk Thursday, “uphill travel” will no longer be allowed at either resort for the remainder of the season.

Last weekend, both resorts saw a large volume of skiers climbing the slopes.