Winter Olympic sports can put athletes on the (literal) edge 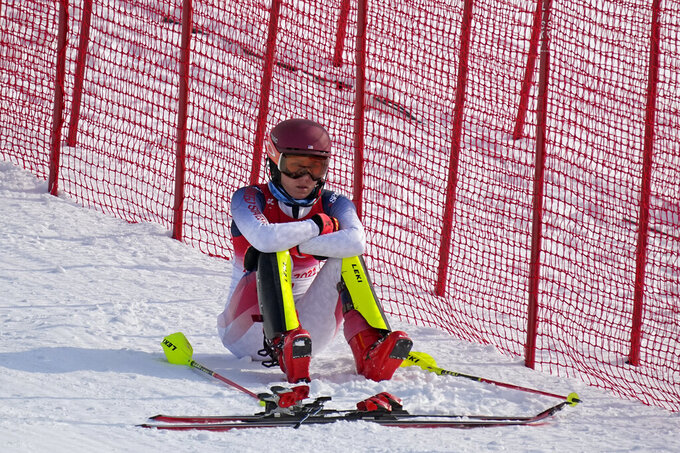 BEIJING (AP) — Skiers skidding into safety nets. Snowboarders eating it on the halfpipe. Speedskaters crashing into the barriers — and each other.

When Winter Olympians talk about losing their edge, they often mean the literal edge of a skate, a ski or a snowboard. That sharpened strip can be the difference between a spot on the podium, or one in the hospital.

“You look at this whole sport, and it seems like margins are everywhere,” said American Ryan Cochran-Siegle, who won a silver medal in the super-G last week but skied off the course Sunday in the giant slalom.

“We’re always assessing risk and trying to take on as much risk as we can, without going over the edge,” Cochran-Siegle said. “You don’t really understand those risks until you do go on the other side.”

While the summer sports present their own dangers — think gymnasts vaulting high into the air, or the pileups that can wipe out a cycling peloton — it’s the sheer slipperiness of the ice and snow in the Winter Games that can make a tiny mistake turn perilous.

To cut a proper path — or simply remain upright — athletes sharpen their skis or skates to the finest edge. Everything depends on it: There are moments that “pretty much all of your weight is on a single edge,” American downhiller Bryce Bennett said.

Already in Beijing there have been crashes in snowboard cross, falls in figure skating and daily pileups in short-track speedskating that draw comparisons to a NASCAR race.

German skier Dominik Schwaiger needed to be evacuated on a sled after falling in the downhill, landing on his back and sliding down the mountain. He was holding his left arm in obvious pain.

Speedskater Corinne Stoddard broke her nose when she fell and banged into the boards. She returned with a patch to numb the pain.

American Nina O’Brien broke her leg after she crashed out of the giant slalom. She slid across the finish line, screaming in agony, and was stabilized at a local hospital before she could return to the United States for more treatment.

“If you don’t have a perfect landing on your edge, you’re kind of screwed,” said Zoe Kalapos, an American snowboarder. “So it’s all about having good fundamentals and landing on the right edge.”

For some sports, the literal edge is accompanied by a figurative one. Alpine skiers talk about racing on the edge of their skis, but also refer to pushing the edge: butting up against the limit of what's possible without careening off course.

Two-time gold medalist Mikaela Shiffrin struggled with both in Beijing.

After the American missed a gate about 10 seconds into her first race in Beijing, another skier, Sarah Schleper, said: “It was so slick up top, she just lost her edge.”

And the best explanation Shiffrin herself could offer for missing another gate five seconds into her second event, was that she pushed too far.

“I had the intention to do my best skiing and my quickest turns. But in order to do that, I had to push the line, the tactics, and it’s really on the limit then,” she said. “And things happen so fast that there is not space to slip up even a little bit.”

Even when both physical and mental edges are properly honed, there's still that chance that an inconsistency in the surface can be trouble.

Two-time Olympic figure skating champion Yuzuru Hanyu was supposed to open his short program with a quad salchow, but his blade hit a hole in the ice and he aborted the jump. Instead of a chance at the first three-peat in almost a century, he did not medal at all.

American snowboarder Shaun White needed to land his second run in qualifying to reach the halfpipe final. He felt good about the part he could control.

After a crash, the challenge becomes going back out without fear of another wipeout.

Cochran-Siegle said most of the skiers in Beijing had overcome major injuries at some point in their careers.

But here they were, pushing the edge anew.

“At the end of the day, you also have to put all that behind you and go out and push to your limits,” he said. "Because the guys that risk it all generally are the ones that win it all, as well.”